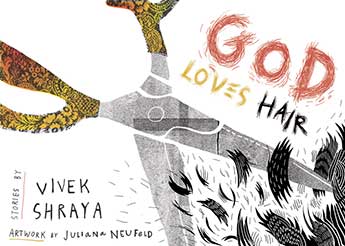 In his debut work, Alberta-raised and now Toronto-based writer, filmmaker, and singer-songwriter Vivek Shraya delights us with a moving collection of coming-of-age stories about growing up as a queer young man of Indian descent in Canada.

The stories begin lightheartedly, both playful and innocent: Shraya tries on his mother’s saris and plays with his aunt’s lipstick as a young boy, much to the delight of his female relatives. The tone darkens, however, as he enters adolescence and becomes a target for a predatory older boy with dark intentions and, even worse, the victim of multiple cruel and unforgiving homophobic bullies at school. Nevertheless, even as Shraya shares his painful memories with us, he remains hopeful and optimistic.

LGBTQ audiences will relate to Shraya’s difficulties with coming to terms with his sexuality throughout his childhood and teenage years. Readers who have experienced immigration firsthand or grown up in a diaspora will no doubt find resonance in Shraya’s efforts to find solace in his traditions of origin while simultaneously questioning them in order to find meaning in a new culture. For a broader audience, his musings on the awkwardness of adolescence will hit close to home: who doesn’t remember being a coltish teenager worrying about fitting in, sex, and—of course—strange new body hair?

Shraya’s stories are brought to life by Juliana Neufeld’s boldly expressive and colourful full-page illustrations. One can imagine that this set of short stories also would have fared quite well as a more traditional graphic novel, but its genre bending format speaks acutely to the themes of crossing cultural, gender, and sexual boundaries.For those of us who grew up feeling a little different, a little queer, or a little out of place, God Loves Hair will strike a familiar chord. (Melissa Hergott)