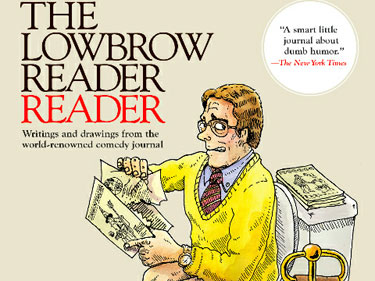 Recently, when asked for relationship advice, and specifically if flatulence is acceptable for women (as if it were a choice?), actor Jon Hamm recommended the acclaimed children’s classic Everybody Poos. We think it is safe to say that Hamm would also endorse the toilet humour and frank sexual content of The Lowbrow Reader Reader (that’s right, it’s the “best of” folks!). Not only is this wildly eclectic anthology an ode to flatulence, kitsch, and cultural content deemed “too crude, too crass” for mainstream media, the Lowbrow celebrates comedy by focusing on the truly venerable potty mouths of our time. This edition of the “lushly illustrated comedy zine” curates the best writing and drawings from the series’ eight issues with some new material thrown in for good measure.
The goal of the Lowbrow, according to editor Jay Ruttenberg, is to contribute, if only a “microscopic crumb,” to the New York “cultural ecosystem” that inspired the journal’s creation back in 2001. Selections like “Joan Rivers: A Bitch in New York” by Ruttenberg, and “The Queens of Comedy on the Commandments of Sex” by Margeaux Rawson are noteworthy steps in the right, hilarious and lewd, direction. As are the very creative answers to the question “What To Do With Our CEOs?” Performer and “Flaming Creature” Justin Bond, who will forever be known to us as the Mistress of Shortbus, responds to this query with characteristic candour: “Since most of them are old, white, fat and suffering…the best thing we could do…is to put them to work in nail salons across the country.”
Do not be fooled by the toilet that graces the cover of each edition of the Lowbrow — the collection is a carefully compiled evaluation of popular culture and a tribute to its more nasty bits. (Julia Cooper)