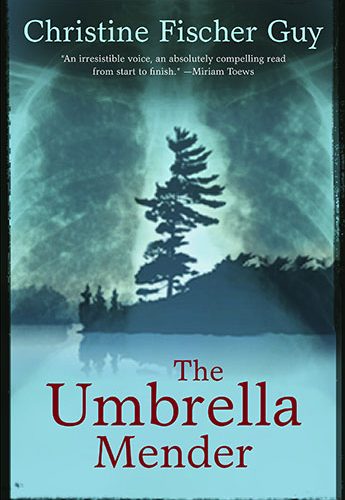 With its haunting opening scene of a woman giving birth alone in a silo, Christine Fischer Guy’s The Umbrella Mender wastes no time in making its narrative intentions clear.

This story belongs to Hazel MacPherson. In 1951, barely twenty-one years old, she follows doctor Lachlan Davies up north to Moose Factory, where they start a hospital to treat Inuit and Cree patients fighting an epidemic of tuberculosis. While at the hospital, Hazel is beset upon by another individual, a “mushfaker” (umbrella mender) named Gideon Judge. Gideon immediately catches Hazel’s eye; in him she views a type of wildness functioning at odds with the responsibilities of her day-to-day existence. The two enter swiftly into a physical relationship that winds up testing Hazel’s commitment to her work and her relationship with the doctors and other nurses at the hospital.

The novel uses shifting points of view to its advantage. We see Hazel in 2010, an old woman struck mute, reflecting on relationships and events from her past, balanced against scenes of a young Hazel as she attempts to navigate her environs. We even occasionally see the mushfaker’s perspective as he contemplates the intriguing woman who has entered into his life.

Fischer Guy’s writing is strong, well paced, and evocative. The northern setting is rendered more through the characters’ interactions than by excessive detail, which works to the novel’s advantage. And the relationships, especially those between Hazel and Ruth, and Hazel and Doctor Lachlan, reinforce this. In fact, it’s only with Gideon that things seem at all strange, mostly because, well, he has a tendency to try too hard (e.g.: when he says things like “Time is a construct for the masses. It has no hold on me.”)

In truth, the novel is more about the legacy of an individual than it is about the individual himself, as the titular umbrella mender feels at times like a footnote in Hazel’s life. However, as we see in its tragic yet beautiful ending, it’s in the ripples caused by their short time together where the narrative finds its weight.
(Andrew Wilmot)