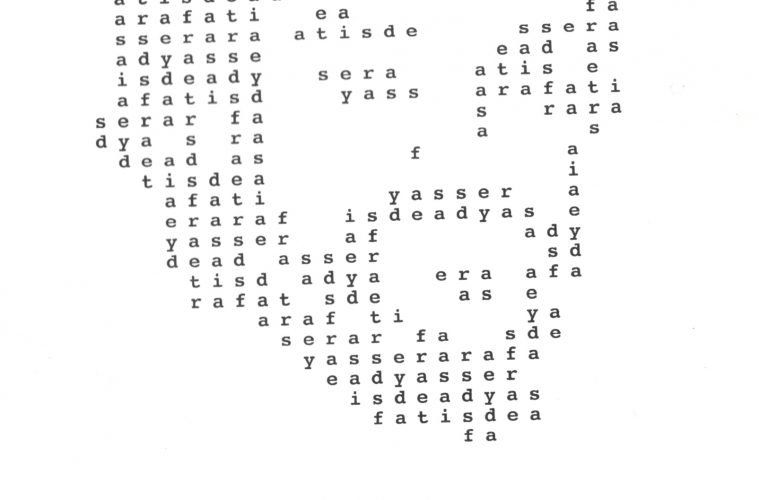 Yasser Arafat is Dead is a poetry chapbook published by the notable Ottawa press, above/ground, and it features the work of Damian Lopes, Barrie’s own Poet Laureate. It’s the first chapbook he’s published in 15 years and, understandably, there’s a lot of ground covered here: lost relationships, cultural heritage, bloodlines and borders.

In terms of physical composition, there aren’t any frills. It’s simple, but clean looking: 16 poems printed on regular white paper, except for a page of blue for the title and back copyright pages. And save for the concrete poem on the front cover, there aren’t any illustrations. It’s a purist poetry chapbook, more or less.

But in terms of convention, the poetry itself isn’t quite so pure. The first poem, “converse” is a 4-stanza, 21-line poem full of dense wordplay, stark imagery and enjambed thoughts: “clipped / consonants separated / by bakelite tie / tongues as teens / bash teeth”. The poem explores linear constructions of meaning and how those meanings are so often interrupted, undercut along a trajectory of complicated premises: everyday conversation, coming-of-age personal development, the written word in general. It’s pretty dense stuff.

To give context to Lopes’ writing, it seems this chapbook is dedicated (albeit, critically) to his father, Anthony D. Lopes, who passed away in 2014. The concrete poem on the cover has the title text, “yasser arafat is dead” arranged in portrait – not of the prominent Palestinian leader, but of the late Anthony Lopes. It’s an interesting comparison. The poem, “remembrance day” further ties the two figures together: their shared “concealing smile / paths of resistance / navigated elusively / manipulated hand”, though of course, “a people likewise do not / pick their sire”. The next poem, “the call” bridges this sense of global conflict with domestic reality: “we have not spoken / since my sister’s wedding / my nephew is four”. But relationships are not lost by chance: “you evade my concern / but the mitosis / is slow”.

Separation, like liberation, is not an easy process. Despite its critical perspective, the poems throughout Yasser Arafat is Dead form an act of recognition; the chapbook picks up the pieces of a broken relationship, not to put them back together, but to place them along a line of identification, no matter how arbitrary that placement might be. If this collection is any indication (and I think it is), Lopes’ future work is sure to be similarly thoughtful and expressive. (Jeff Low)