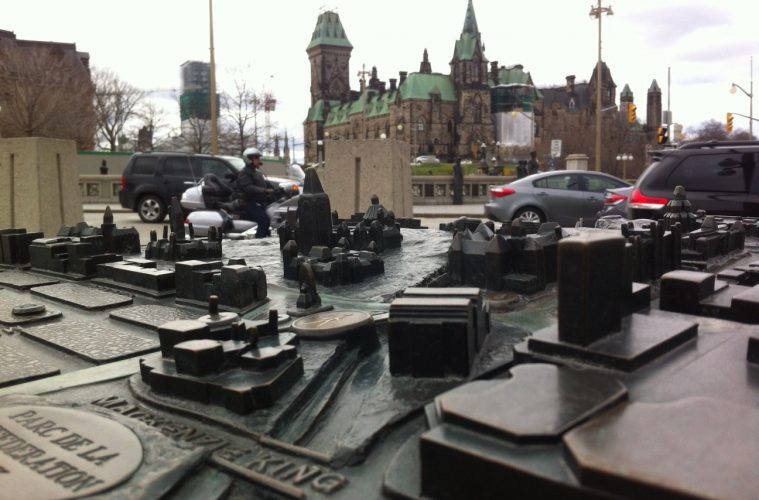 With the sharp peaks of the Parliament buildings to the east, I hurried towards Lower Town in search of my first reading venue for the day. Grey clouds stuffed the sky like dirty cotton candy that had long ago lost its vibrant colouring. I wrapped my scarf tightly around my neck.

The School for the Photographic Arts was in a two-story brick building at the corner of Dalhousie and Bruyère. I climbed the stairs and stepped inside SPAO to find myself in the middle of the hustle and bustle of a show being put up. I hoped they’d put up with me.

After a minute, a woman approached me.

“I was hoping there’d be an exhibit.”

“Come back Friday for our opening reception.”

Then I made my pitch: “I’m a Vancouver poet doing a one-hundred venue chapbook tour of Canada and this is venue number forty-eight.” Her face lit up in curiosity. She had questions: “Do you have a grant to do this?” “Are you doing this on your own?” “Is it okay that the exhibit isn’t up yet?” Her interest grew into the conviction that this was a fantastic idea.

I explained how I was chronicling everything on twitter.

“Well, you’ll have to talk to our social media man.” She took me through the throng of students that were drilling, hammering, framing and putting up photos to a small office. I once again explained what I was doing, adding that in Ottawa I was writing a poem for each space and then making a small book.

He looked at me with a hint of skepticism. To be fair, it’s not everyday someone steps into your life offering to write a book of poetry in fifteen-minutes in response to your world. After we talked for bit longer, he warmed to the idea.

I got a sheet of paper and a stool and I wrote at the edge of the exhibition space. I listened to snatches of conversation. “As beautiful as bustle,” sprang to mind and a short poem followed. I wrote it on my iPhone and then transcribed it to a tiny butterfly book I made from the eight-and-a-half by eleven piece of paper.

I read the poem in front of the exhibit, there was some applause and I was on my way to the next venue a short block away. The offices of the Canadian Improv Games seemed like it would be a fun place to ad lib a poem and as I walked down St. Andrews, I thought up ridiculous rhymes for poetry – “numenometry,” “flow-etry,” “emotion in a tree” – but when I arrived at the address, there was no evidence of any business. I knocked on the door of the red-brick house. The door opened an inch under the force of my knuckles. I waited and knocked again. Finally, I called their number to find that they had moved. The more I tried to explain why I was calling, the more complicated it became. I quickly said goodbye and tried to find an alternate venue. Back on Dalhousie Street, a man in a window display was filling a yellow canoe with Japanese parasols. Wunderkrammer seemed like a nice fit. I looked around the small shop of curiosities for a couple minutes, found some interesting stereoscopic slides and took two to the till. The bearded proprietor listened intently as I explained my day. “The Canadian Improv Games must have known you were coming. They got out of there as quickly as they could.” He laughed with his mouth closed but his bright eyes flashed. We talked about Ottawa and Nathan explained how people worked hard to get into secure jobs that then boxed them in. “People are desperate for something creative outside of the bureaucracy of their weekly existence.”

Once again I was writer-in-residence for a new space. I wrote a poem in response to the slides I’d looked through. “Back when Dentists stomped on your feet to get an opening,” was one of the lines. Afterwards, I read it out loud to everyone in the store. Nathan gave me the two slides as a thank-you for adding some surprise to his day.

The afternoon warmed up as I found my way to Bank Street where I wrote mini-chapbooks at the Wallack Gallery and then at Octopus Books. Everyone was enthusiastic about my project and I was happy to have space to write about the darkness I felt in the gothic architecture of the Parliament buildings – a dark Disneyland for power-hungry politicians. This was part of the poem that I wrote for Octopus Books, but I kept thinking that what I really wanted was a punk band. Jello-Biafra style lyrics kept slam-dancing in my mind. After writing and reading at the Manx Pub and then the Falldown Gallery, I had my final venue at the Raw Sugar Café with Sneha Madhavan-Reese and Pearl Pirie. rob mclennan, the hardest-working man in Canadian poetry, had organized the reading and was also acting as my host in Ottawa. It was a perfect finale to a very full day in Ottawa.