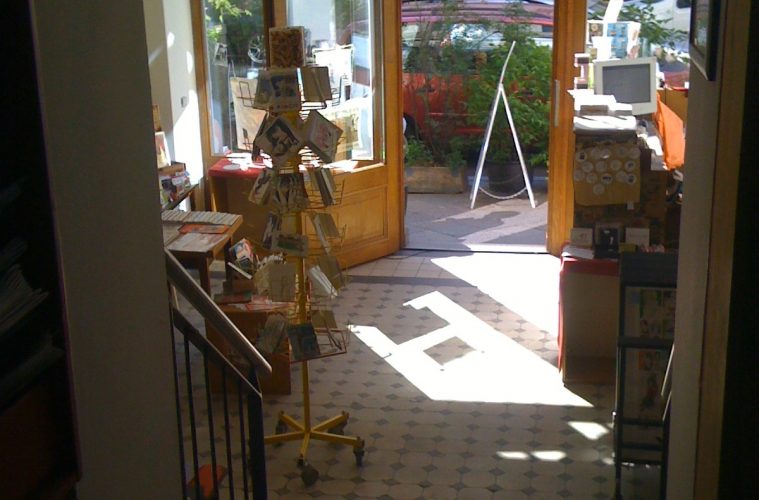 Germany’s only comic library is, unsurprisingly, awesome. Starting, as all awesome things do, as a zine, Berlin artists Atak, CX Huth, Peter A. Bauer and H. Lau first banded together in 1989 to produce Fanzine Renate #1, a discussion and showcase of cutting-edge comics.

Over the years, the zine collected other artist members and contributors and once a year the collective banded together to publish its work.  If you do the math, this means its catalogue sits at just over 20 books that all range widely in style and tone from the artists who have passed in and out of Renate.

Back in the late 80s’,Renate was not surrounded by the trendy restaurants  and design shops it is today. The downtown district of Mitte, where Renate makes it home, has gentrified post haste into the touristy area most visitors to Berlin are familiar with. Renate has transformed, too. It’s a comic store, library, comic workshop for kids and, on the first Monday of every month, it  hosts a comics lecture series. When I visited in July, the latest session covered the Tijuana Bibles of the 1920s and 1930s that took depraved and lustful twists on pop culture characters like Snow White and Archie. Anyone can attend these free lectures, but for a mere €12 (and a Berlin address) you can get access to Renate’s library for a whole year:   17,000 comics and comic-related materials crammed into one tiny room at the back of the shop. (An open door even further back opens onto another room exploding with even more boxes overflowing with comics.) This massive collection began quite humbly when Renate collective members would bring books to show one another. Pretty soon, people began leaving these books for the benefit of the group and Renate came into some money to build out its library further. It also gained the reputation of accepting any comics-related books as donation. On the day I stopped by, someone had just dropped off a stack of rare Finish comic magazines. Excluding a few rarities, such as the books of 19th Century cartoonist Rodolphe Töpffer, most of the collection can be taken out for a two-week period.

Renate has only recently started a website and has began blogging regularly, too.  You can follow its updates, particularly as it gears up for the fall’s 24-hour zine challenge, here. You can also gawp at its truly astounding collection online here.