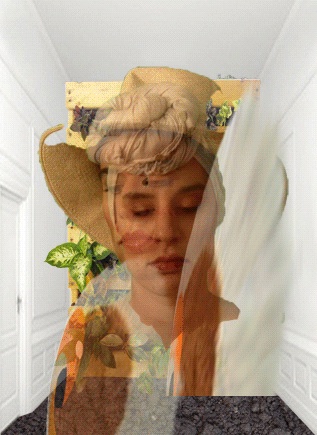 The Smell of Our Own: Rea McNamara

I first met Toronto’s Rea McNamara during Sheroes, an online/offline series that pioneered the “GIF event” (McNamara pronounces it with a soft “g”). McNamara created the series, acted as its main curator and conceived each event, and she also displayed her own work along with other artists. Each Sheroes is based around a different female icon, and features live performances melded with GIF projections: my fave was a Dolly Parton tribute. Back then, with her elaborate costumes and razor sharp mind, McNamara intimidated me more than a little bit, as she still does (I’m always a little surprised when she says hi to me at parties).

Identifying as artist and writer first and curator as a byproduct of those, McNamara recently took part in year two of The Wrong, the world’s largest online art biennale. As a digital curator, McNamara had a group of artists create works during residencies for the Biway Art Foundation, an organization which “doesn’t have the best of intentions at heart.” (The BAF is imaginary).

What attracts you to digital and GIF art?

The concept of internet culture is such a strange, over-arching thing — for most of my life it’s been a preoccupation. I grew up in a small town so modem access was a gateway to the world, and growing up, a lot of my ideas around art making were influenced by fandom and that forum of DIY culture and appropriation, and community-based ideas. It’s been there all my life: how could it not be a subject?

Is The Wrong your first time curating an online-only show?

I would consider Sheroes an online/offline project, but this was perhaps different because it was just online. It was fascinating to think about the online space as not necessarily an extension of a real-life thing but as its own constructed reality in itself.

How did you approach curating the exhibition?

I have limited web-building skills, so I wasn’t going to do some crazy Google VR cardboard site. I was interested in playing with fact and fiction, and satirizing different funding models and institutions in the art world and how these institutions come to be. A satirical art foundation became the starting point.

Tell me about the “Biway Art Foundation.”

Biway was a Canadian discount retailer that had this reputation — if your parents were caught shopping at Biway kids made fun of you. So there was a real classism, but also a loved history. Biway shut down in 2001.

When I was an editor with Artinfo, I was writing a lot about luxury and fascinated by luxury brands’ forays into supporting the arts. I was interested in looking at how the commercial and private side was engaging with art, and portraying this bad story of that — where a foundation is created as a massive rebrand tactic for a retailer, and artists’ works were compromised in some way.

Why is it important for you to make fun of aspects of the art world?

Humor is a great way in which to open up a world where… there are barriers, and barriers to talking about issues. In Canada there’s a lot of pressure from the government to seek private support, but there are no guidelines — okay, just because you fund a project doesn’t mean this is an extension of your brand that you slap your logo on. There doesn’t seem to be any parameters around that.

Is digital art more free from that struggle because it doesn’t need that kind of funding?

I don’t think so. A lot of digital art is only recognized or curated within after-Friday parties and one-night screenings with DJs and food trucks, but none of these works are getting acquired. I don’t know the last time an artist with a significant digital art practice had a retrospective at the Art Gallery of Ontario. It will change when it will change. Digital artists and galleries are figuring out the scarcity market.

Right now, digital art is almost a form of public art. Work is shared via social networks. But a lot of artists are changing, because they take their work seriously, and it can be challenging to be put in a box. A digital artist is an artist, you know?

Who are some of your favourite digital artists right now?

Rea McNamara’s writing has been published in Art F City, Art + Auction, ARTINFO, the National Post, Little Brother Magazine and more. Committed to arts-based community development, she has facilitated projects for the non-profit Art Starts, and curated limited-run event series, including Sheroes. She is senior editor of experimental video art label Undervolt & Co.; recent curatorial projects include The Wrong and an event for the Music Gallery in 2016. Learn more at reamcnamara.com.

Kristel Jax is a writer, artist, and musician. She currently performs solo as Brigitte Bardon’t, and hosts two Youtube comedy series, Noise Haul and Drone Therapy. She lives in Toronto with her mini-pug Lana Del Satan and works at the Music Gallery as Communications Coordinator. Her website is kristeljax.com.