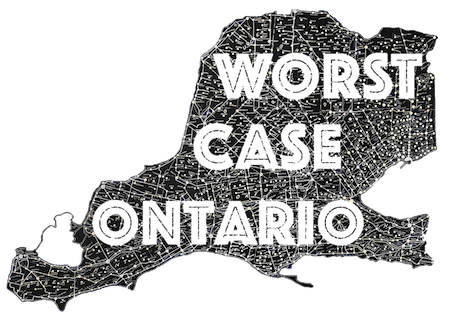 It’s Friday night, and a buzzing audience has gathered at the White House Studio Project (read: a concrete-floored upstairs ex-dojo in Toronto’s Kensington Market) to hear from five of the most resonant young voices in Canadian literature. This is day one of a groundbreaking nine-day tour bringing Jessica Bebenek, JC Bouchard, dalton derkson, JM Francheteau, and Julie Mannell to poetry readings in nine North American cities. They’ve dubbed it: Worst Case Ontario.

derkson opens the night by spitting half a beer in the air and telling us “This mic is your mic.” The audience takes him up, hooting, heckling, and chiming in between pieces, but somehow the ruckus is interspersed with long moments of rapture while each of the poets reads. The merch table at the back of the room is crammed full of hand-bound chapbooks…and custom Worst Case Ontario underwear.

After our interview at Ronnie’s Local 069 in Kensington, Ottawa-based poet JM Francheteau explains one thing all of the group’s poems have in common: they’re unapologetic. Bebenek, for example, admits she’s never thought about her audience while writing, and derkson unabashedly tells us “I’m going to be doing it anyway”—it’s up to you to like it or not.

Nonetheless, both poets have a history working with the community as micropress publishers: heading Grow & Grow Press and Hurtin’ Crüe Press, respectively, both are well-travelled in the art of discovering and disseminating great poetry at the grassroots level. Worst Case Ontario is in many ways an extension of this mission: over the next seven days, the group agrees, the main goal is to bring quality poetry to Canadian and American audiences that may otherwise never be exposed to it.

But Francheteau’s insight, beyond reflecting the poets’ approaches, also permeates their styles. Without stopping to justify or censor their statements, the poems in Worst Case Ontario’s touring chapbook put raw experience centre-stage, forcing you to meet it face-to-face. Line after line, even the most disconcerting sentiments are offered up sharp as unsheathed knives, as in Bouchard’s “You Disappear”: “I leave you in the stink of tepid loon shit / If you loved me a year ago you hate me now / The poet took all the booze and split.” As Mannell has said in the past: “Poetry is not a safe space.”

Worst Case Ontario may be uncompromising in their self-presentation, but they’re by no means selfish. From the beginning, the tour and its accompanying Kickstarter campaign have focused on balancing the insistence that writers be paid for their work with the desire to give audiences concrete value for their participation. “If you don’t suck, you’re giving them something,” says Francheteau, summarizing exactly the group’s justification for collecting funds via Kickstarter. Masterminds Derkson and Bouchard conceptualized Worst Case Ontario along the lines of the music industry’s band tours, but while musicians are normally paid for live performances, literary events tend to be free. Considering this, Francheteau explains, Kickstarter was simply a way to earn money in advance for performances that funders would later enjoy free of charge.

After surpassing its $1,000 minimum goal in the first day of the campaign, Worst Case Ontario’s Kickstarter topped out at nearly $4,000 raised, although the group considers that total a more realistic estimate of their travel and accommodation costs. Still, there is no doubt that the campaign was a success. Perhaps most importantly, Kickstarter became a crucial alternative to the system of government-funded grants that support the majority of Canadian poets, yet are not easily accessible by projects like Worst Case Ontario. Where receiving grants meant relying on prohibitive timelines, unintuitive application requirements, and arbitrary decision-making, Kickstarter’s DIY approach provided a better means of direct collaboration between the poets and members of their community.

If, as Francheteau writes, “History / is a riot in a filing cabinet, and Here / must be considered probationary,” Worst Case Ontario’s practical and stylistic risks may be indispensable to the never-ending articulation of Canadian literature. In the preface to their chapbook, the group suggests that “literature is built by new voices, diverse voices, voices that seek to break and won’t be broken.”
“We are the new voices,” states Bouchard.

Worst Case Ontario will be touring cities in Canada and the U.S. through August 29. Check out their full tour schedule on their website.