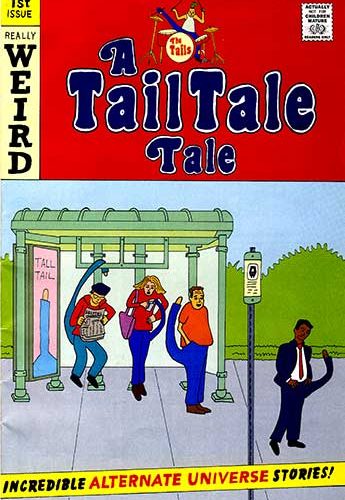 There are two types of people in this world: people with tails and — well — everybody else. For more information on the former, consult Google Images. Or for a fictionalized account, pick up A Tail Tale Tail.

This comic gives us a glimpse into a reality where the tail is central to the human condition. There is tail envy, tail bullying, tail fetishes and more. In a way, this effort could be taken as a commentary on body image and shaming and things of this nature. There are certainly undercurrents that reign true in reality, even if the tails depicted are, frankly, more simian in nature.

However, most of A Tail Tale Tale is played for laughs as creator Jonathan Rotzstain etches out how tails become central to the experiences of growing up, dating and other epochs. He even invents a support organization called Prevail that is dedicated to eradicating “tail hate”. The whole thing is bizarre in a fairly good way and it works since the scenarios seem entirely plausible if you remove the tails themselves from the equation. The Tail Mail readers letters are pretty awesome as well, “written” by a Dear Abby-type and addressing all sorts of tail-related concerns — of which there are plenty. (Cam Gordon)