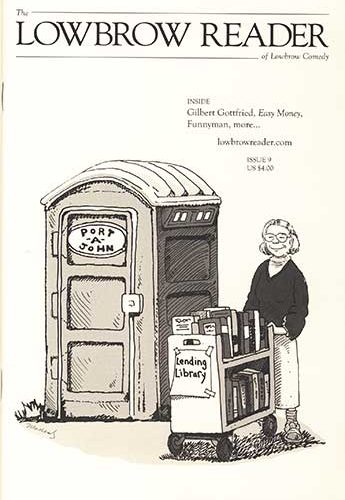 Contrary to popular opinion, the word “lowbrow” need not exclude intellect, nor solely be a guilty pleasure. Case in point: The Lowbrow Reader. Created by editor Jay Ruttenberg, he and a series of contributors revel in the crass, dumb and tasteless side of comedy with essays, fandom pieces and other off-the-wall fragments.

The centerpiece of the issue is Ruttenberg’s own story, “Gilbert Gottfried, New York Punk,” a thoughtful analysis of Gottfried’s devotion to comedy and selfless service to “the laugh.” Ruttenberg recounts some of Gottfried’s famously detestable episodes (mocking survivors of the Holocaust and the Fukushima disaster) without condemning or apologizing for them. Rather, his purpose is to frame Gottfried as a quintessentially New York comedian, and trace artistry at work in Gottfried’s style and act, despite the tension posed against general senses of taste and propriety. Gottfried himself contributes two R. Crumb-esque illustrations.

Another notable story is “My Name is Julio: I’m So Bad, I Should Be In Detention,” by stand-up comic and character actor, Taylor Negron. It’s a well-written micro-memoir with Negron waxing existential vis-à-vis his role as Rodney Dangerfield’s son-in-law in the 1983 film, Easy Money.

Ruttenberg and company have made The Lowbrow Reader for over a decade, including a book-length anthology in 2012. This is a zine where smart people profile dumb comedy in a way that honours the lowbrow legacy while at the same time re-contextualizing it. Whether one is a fan of fart jokes or not, the work here is a great gateway to this part of comedy culture. (Joshua Barton)