Paste Bomb (n): A random or nonsequiturial piece of data that is cut from one’s hard drive and pasted into an online conversation. Meant to entertain, infuriate, and befuddle online conversants.

The Internet isn’t going to make your life better.

There, I said it.

The Internet is a vast, Byzantine procrastination device that can (and will) threaten to engulf all of the functional and productive aspects of your existence. [NB: The time that it’s taken me to write this paragraph, for example, has been effectively doubled by the fact that in the middle of its composition, Christian Bök sent me an email containing a link to “Decade of Rad: The 10 Eightiest Movies,” a prose snickerfest replete with gems such as the following, from the synopsis of Breakin’ 2: Electric Boogaloo: “When are real estate developers going to learn that progress is no match for break dancing recreation centers? I honestly think that if the American Indians knew how to break dance, our boats would have been pop rocked away and we’d all be reading this from the pantaloon lacing festival in the Spanish countryside.”] If you’re so inclined, there is a simple way to avoid this fate: turn off your fucking computer, grab a Frisbee and take the dog to the park, then have a sandwich and go build some houses for Habitat For Humanity. Everyone else — those of you that won’t or can’t allow your keyboards to be prized out of your pale and twitchy hands — please proceed to the next paragraph. If you’re going to waste time, you should learn how to do it with some efficiency.

First of all, it’s not your momma’s Internet anymore. Since every 13-year-old with computer access now has a weblog, Google and the other venerable pillars of on-line search technology have been hopelessly gummed up with huge wads of post-literate meandering. In order to avoid becoming trapped in this morass and get to the good stuff (i.e. whatever rubs your particular nasty), you’ll need to start frequenting some sites that’ll do your filtering for you.

“Filtering” is exactly what it sounds like: the process of sorting data through some combination of automation and human collaboration. A website’s readership is often the source of its best material, and provides the cheapest and most effective way to rank and sort all of the material that’s submitted to its editors (I won’t bore you with the details of how collaborative filtering works, but if you’re really curious, you can always read the Slashdot FAQ). The trick for individual would-be procrastinators is to locate the site or sites that concentrate the material that you find most interesting into a series of dense, flavourful bouillion cubes of data. (There are also tools like Shrook and Newsmonster that will help you oversee a number of such sites at once, but I’ll get to that next time.)

Following are a few of the sites that I visit every day — some of them several times a day. Bookmark them. Love them. Use them. There’s nothing they’d like better. So set your propeller beanie at a jaunty angle and start typing.

Slashdot — www.slashdot.org
The bleeping bionic Linux-based heart of the geek universe, Slashdot now has so many regular readers that its name has become synonymous with the on-line traffic jams that result from thousands of people all trying to follow a single hyperlink simultaneously.

When Slashdot links a site, often a lot of readers will hit the link to read the story or see the purty pictures. This can easily throw thousands of hits at the site in minutes. Most of the time, large professional websites have no problem with this, but often a site we link will be a smaller site, used to getting only a few thousand hits a day. When all those Slashdot readers start crashing the party, it can saturate the site completely, causing the site to buckle under the strain. When this happens, the site is said to be “Slashdotted.”

Recently, the terms “Slashdot Effect” and “Slashdotted” have been used more generally to refer to any short-term traffic jam at a website.

Slashdot covers a huge variety of topics on a daily basis — everything from the minutiae of Free Software politics to on-line gaming to book reviews to anime to weird Star Wars sex sites (where else would you find a link to the “Scout Walker Kama Sutra”? Some people have far too much free time). The beauty of the site is that it’s highly configurable; as a registered user, you can specify what topics you want to appear in the site’s main window, build customized “Slashboxes” that display links to other sites that interest you, maintain a free on-line journal, and do all sorts of other wonderful things that many sites would only provide as paid services. By rights, Slashdot should be your home page. The only downside is that the zealotry of the site’s reader comments can occasionally grow tiresome.

Blogdex — www.blogdex.net
Blogdex is a brilliant piece of programming that originated in the MIT Media Lab. It does exactly what its name suggests; it tracks the diffusion of information through the blogosphere (i.e. the segment of the Internet that’s occupied by weblogs). Because bloggers typically contextualize their writing with hypertext links relevant to the subjects they are discussing, Blogdex is able to use these links as shorthand for the things that the bloggers are actually writing, which then allows Blogdex to track a piece of conversation as it moves from weblog to weblog.

Blogdex crawls all of the weblogs in its database every time they are updated and collects the links that have been made since the last time it was updated. The system then looks across all weblogs and generates a list of the fastest spreading ideas, which appears on the site’s front page. All you have to do is skim that list and voila — you’ll know what’s captured the ADD-riddled imaginations of the blogger world.

Technorati — www.technorati.com
Technorati is Blogdex on steroids. Not only does it track the hottest stories in the blogsphere, it provides all sorts of other information about the sites carrying the story, such as a given site’s Google ranking, the number of other sites currently linked to that site, the last time that site was updated, etc. One of today’s screamers: “HOLY SHIT!!!!! BBC NEWS reports: Vatican ‘ordered abuse cover-up’ A secret document shows the Vatican told bishops to hide cases of sexual abuse, the Observer newspaper reports.” One of the shortcomings of blog reportage is verifiability; with its system of crosslinks and metadata, Technorati provides that in spades. Incredibly useful, but for serious geeks only.

Metafilter — www.metafilter.com
Metafilter is a weblog roundup of the current popular memes sweeping across the Internet. Anyone can contribute, but the regulars (“mefites”) keep the site stocked with all sorts of juicy oddities. This morning, I’m looking at The Victorian Sex Cry Generator (“Turn your passions upon me! I lie in wait, my avenue too fair, too open to be miss’d.”), the aforementioned Ten Eightiest Movies (aha! So THAT’S where Christian found it), and a round-up of stories marking the 35th anniversary of the infamous 1968 Chicago Democratic Convention.

Memepool — www.memepool.com
The old-school ancestor to Metafilter, built entirely by human hands. No fancy web design, no RSS feed, no sidebars, just links to the endless stream of work produced by idle hands at their keyboards: Jewish hip-hop artist 50 Shekel, Friendster backlash site STD-ster (“You can use STD-ster to: Meet new people to infect, through your friends and their friends; Figure out where that awful rash came from; Motivate yourself to practice abstinence rather than just keep talking about it”), and, of course, Hipster Bingo (in the summer of 2003, Ironic Trucker Cap, Old-School Pumas, Too-Small Sweater, Pabst Blue Ribbon and Miller High Life spells B-I-N-G-O).

Boing Boing — www.boingboing.net
The digital descendant of the late’80s zine of the same name, Boing Boing is the epitome of good blogging — a dense, informative slice of the on-line universe that reflects the personalities, passions, and career pursuits of its four major contributors (Mark Frauenfelder, Cory Doctorow, David Pescovitz and Xeni Jardin). Boing Boing also features “The Guestbar,” a sidebar mini-blog that’s been guest edited by net-stars such as SF writer/video game designer Marc Laidlaw and computer columnist Jon C. Dvorak. Today’s Boing Boping bounty includes a link to the Mini-KISS site (an all-midget KISS cover band), the first whale-fart ever captured on film, and an on-line scheme to “Save Al Franken” from Fox TV’s lawsuit to stop him from using the phrase “Fair and Balanced” in the title of his book. 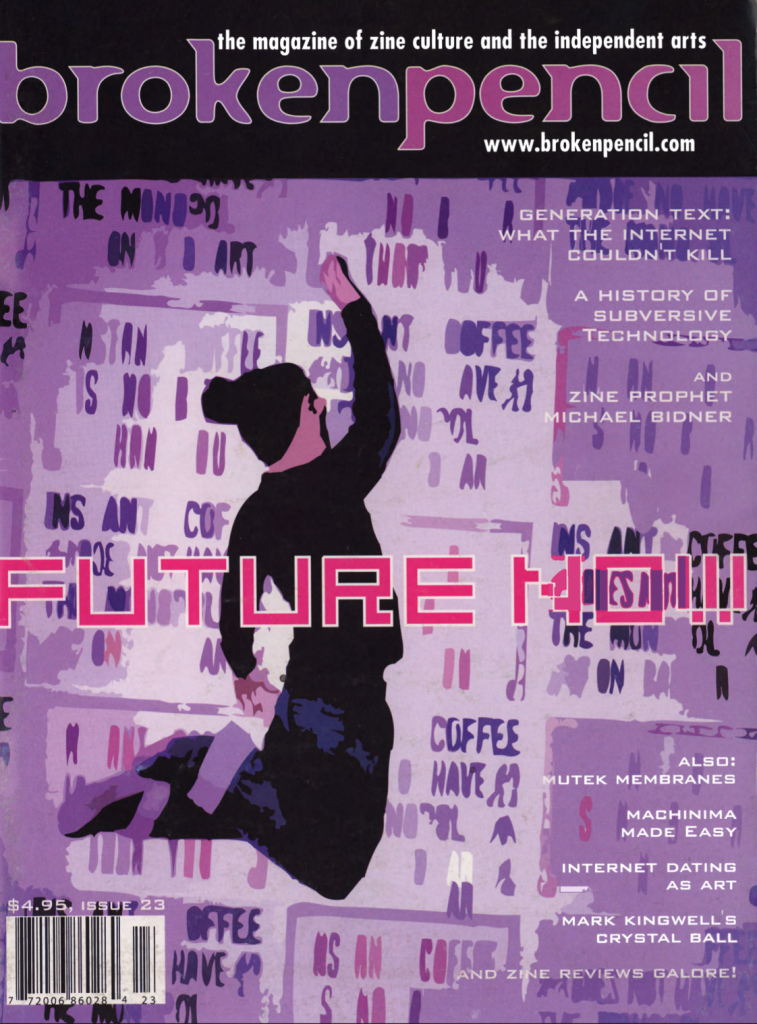