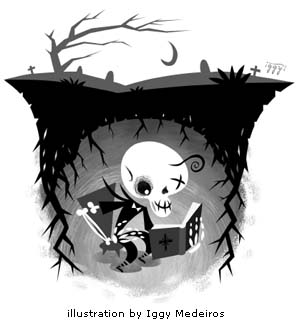 David Cronenberg once said “No horror film is truly mainstream.” While films like the Texas Chainsaw Massacre remake and the Saw franchise appear to do well with a wide audience, this statement is mostly true. Many horror films hide in the darkness of the underground, waiting for someone to stumble across them. Many are either too bizarre like much of Cronenberg’s catalogue, too gratuitous like Slaughtered Vomit Dolls or the August Underground series, or too much, like the latest rash of torture-porn films to make it with the mainstream, Hostel and Wolf Creek .

I realized when approaching this issue, I don’t have as deep a relationship with horror as I thought I did. I love midnight madness screenings, and read my share of gross-out fiction (though I did have to put my head between my knees after reading detailed descriptions of zombies ripping out people’s eyeballs and entrails) but I haven’t followed the darker side as closely as some. Going to my local independent video store, the walls are lined with titles I’ve never heard of. So approaching the horror issue of BP, while very exciting, was also quite overwhelming. How does one become a horror expert in a matter of months? The answer is, get help.

No one was more excited about this issue, and the upcoming horror-themed Canzine, than our own film section editor James King. He details his own struggles as an indie horror filmmaker in his Dairy of a DIY Horror Shoot on page 59 . Special effects and make up artist Brandon Lim offers more help in the realm of indie horror filmmaking with his rough guide to creating your own horror special effects on page 57. And the editor of the online B-movie guide Canuxploitation.com, Paul Corupe, pulled together a panel of indie horror experts to talk seriously about horror’s relationship to independent culture (page 16). All this help and I still studied my brains out to get through the horror issue. I spent so many months following zombies for my article on zombies in independent culture (page 12) that I’ll actually be glad to rejoin the land of the living very soon.

While much of our content for this issue focuses on the filmmaking side of horror, the grotesque splatters over into other arts. Literary horror, from books to comics to zines, is rampant in the underground. David Silverberg explores Canadian gothic on page 44 and Hannah D. Forman shares her reasons for creating a feminist horror zine on page 34 .

So enjoy our joint effort. We dug through the darkest corners to bring you the horror issue of Broken Pencil.