“This is definitely not a contest for sensitive writer types. If you can’t handle the thought of your short story being smacked down by online voters, then you’ll want to stay well clear of this one. Think Literary Survivor. On an island. Surrounded by a sea of sharks.”
– Jennifer Moss, The Vancouver Sun 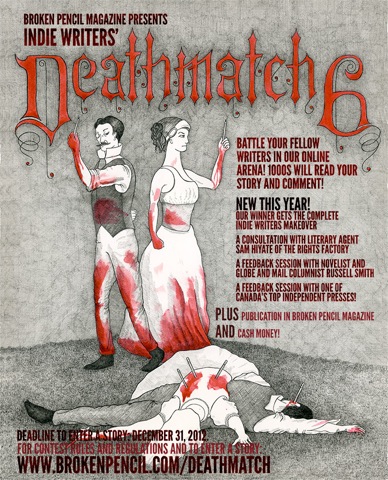 Every year the Indie Writers’ Deathmatch receives tens of thousands of visits from readers all across the planet, determined to cast their vote, pen their comments and do anything they can to see their favourite story win. This time, with the stakes higher than ever, the battles are sure to be more savagely fought than ever before.

Entries are now open for the writing contest that’s like no other. Deathmatch never fails to surprise, entertain, and break new ground.

A contest like no other. Short stories contests are everywhere, but there’s nothing like The Deathmatch. This year we take the world’s biggest baddest online writing contest to a whole new level with a new top prize and a new twist to the rules!

This year the Deathmatch winner gets a complete indie writer’s makeover which includes a consultation with literary agent Sam Hiyate of the Rights Factory, a feedback session with novelist and Globe and Mail columnist Russell Smith and a feedback session with Coach House Books, one of Canada’s top independent publishing houses. All this plus publication in Broken Pencil and cash!

The top 3 runners-up get $100 and publication in Spring 2013 issue of Broken Pencil Magazine!

NEW Rule for the 2013 edition of DEATHMATCH:

All writers who win their first round will have 24 hours to submit a revised version of their story before the next round. All DM round 1 winners must submit a story revision they cannot use the round one story in round two without revisions. The BP editors will determine, in consultation with the online community of voters and commentators, which version of the story will ultimately appear in Broken Pencil.

ABOUT DEATHMATCH: Since 2008, Broken Pencil: the magazine of zine culture and the independent arts, has been running one of the world’s most audacious short story contests. In the Indie Writers’ Deathmatch, the top eight submitted stories as selected by Broken Pencil are pitted against each other two by two. Each week, two stories will be pitted against each other in the online arena, where anyone and everyone can read them and vote on which one deserves to reign supreme. The authors will be in constant communication with their audience through a blog which they can use to hype up their own story, or trash-talk their opponent’s writing. The winning story moves on to the next round until there are only two stories left, battling it out for ultimate victory! With over 25,000 votes cast, the Deathmatch is a high stakes struggle for literary bragging rights! Don’t believe us? Check out past years of Deathmatch insanity — 2010 is here, 2011 is here and 2012 is here.

More about the people behind the top prize:

Sam Hiyate, president of The Rights Factory. His client list includes Jennifer Close, whose debut Girls in White Dresses was a recent NYT bestseller, David Gilmour, Margot Berwin, Andrew Kaufman, Mariko Tamaki, Jessica Westhead, Claire Letemendia and Rupinder Gill. Before that, he ran the literary division of The Lavin Agency. In his 20+ year publishing career, he was co-founder and publisher of the litmag Blood & Aphorisms (b+a) and the editor/publisher of the avant-garde literary publisher Gutter Press. Sam also teaches at University of Toronto and Ryerson University and has lectured across Canada on publishing.

Russell Smith’s most recent novel is Girl Crazy (HarperCollins). His debut novel, How Insensitive, was a finalist for the Governor General’s Award. Both his short story collection, Young Men, and his novel Muriella Pent were shortlisted for the Toronto Book Award. He writes weekly on culture in the Globe and Mail.