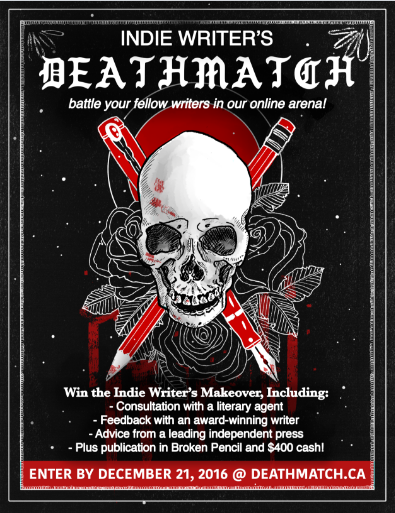 How the Deathmatch works:

The top 16 stories are selected by Broken Pencil’s fiction team.
They are then dropped into our online arena and pitted against each other in our weekend-long lighting round. Winning stories move on to the round-robin, one on one battles. For all the Deathmatch details see Rules and Regulations.

The winning stories are decided by the readers themselves, with a public vote. In the online arena, anyone and everyone can read the stories and cast their ballots for the writer they think deserves to reign supreme. The authors will be in constant communication with their audience through the comment board, where they can respond to feedback, hype up their own story and trash-talk their opponents.

Tired of your stories fading into the oblivion? With over 100,000 votes cast every year, the Deathmatch is a high-stakes struggle for literary bragging rights! The winner of the Deathmatch lays claim to a giant fanbase of fiction loving weirdo enthusiasts. Are you strong enough for the Deathmatch? Are you ready to compete for complete and utter domination?

The Winner Gets: The Indie Writer’s Makeover

How would you like your work read by an established writer, a literary agent and an editor at an acclaimed publisher? Enter the Deathmatch and that might just happen! The winner of the Deathmatch will set down and get serious feedback from writer Jonathan Goldstein, Editor Veronica Liu of Seven Stories Press and Literary Agent Chris Bucci. 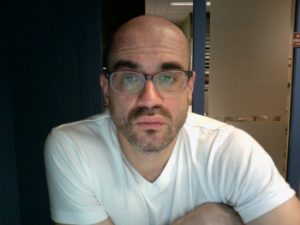 JONATHAN GOLDSTEIN’s writing has appeared in The Walrus, The New York Times, GQ, and in the National Post. He is a frequent contributor to PRI’s This American Life and The New York Times Magazine, and he is the author of the short story collection Ladies and Gentlemen, The Bible! and novel Lenny Bruce Is Dead. For 11 years he hosted Wiretap on CBC Radio One. His new podcast Heavyweight looks back at the big moments we want to redo. 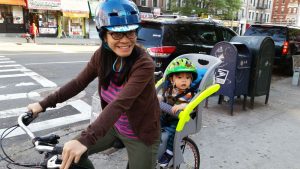 Veronica Liu has been an editor at Seven Stories Press since 2006 and was formerly a publisher at Fractious Press. In 2011, she founded the community bookstore Word Up, a membership-based literary collective and art space. She was also active in the Seven Stories Institute which was designed to circulate books in underserved populations. 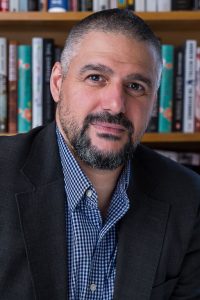 Chris Bucci is a literary agent, director and full partner at The McDermid Agency. He represents bestselling authors such as Bob Rae, Timothy Caulfield, Susan Delacourt, Jowita Bydlowska, James Grainger and Kerri Sakamoto. Most recently senior editor at McClelland & Stewart, he worked primarily with non-fiction, bringing to the M&S catalogue the likes of Alain de Botton, Christopher Hitchens, Paul Watson and Sir Martin Gilbert.
He began his career at the University of Toronto Press and soon became an acquisitions editor in social sciences and cultural studies. Bucci joined HarperCollins Canada in 2003 as a non-fiction editor. Moving to M&S in 2004, Bucci helped revitalize the McClelland & Stewart non-fiction program, establishing relationships with international authors, agents and publishers.

What Is The Deathmatch Short Story Competition

The Incredible History Of Deathmatch

Thanks to our National Education Sponsor: