The words sang from the un-tuned babble of children. They echoed off of the P.E. building’s cream brick and out into the open field. Five fourth-grade classmates were playing a game of kick the dirt at the crying child, a crying child huddled in a ball within their circle.

“Here fatty. Have some dirt. I bet you even eat dirt, you’re so fat.”

“Yeah, you’re so fat you went to the beach and Greenpeace tried to push you back in the ocean,” chimed in another voice.

The kids scattered like fireworks in a pandemonium of “AHHHHS!” The little girl at the epicentre watched them disappear, and began rubbing her eyes with the back of her fists. She was trying to suck the snot back into her nose and wipe the mess of saliva off of her chin when an old man limped over on a walking stick. He grunted and kneeled down in front of her, steadying himself on the stick.

The girl rolled over on her hip, curled her legs beneath herself and sat there under the eyes of the old man. The dirt had turned to mud on her cheeks where the streams of tears moistened it leaving her with a pronounced grimace. Her black hair had become the dusty brown colour of the earth and wilted grass beneath her.

His silver hair and gray eyes were the colour of the heavy clouds on the horizon – the monsoon clouds were rolling mercury above Camelback Mountain. The deep crags around his mouth were like the desert landscape. When she looked up at him, she saw the brown hills and ravines. The skin around his eyes was cracked and lined. The folds of his weathered face softened when he smiled. To Sandy, his face was foldable, malleable. It conformed to any shape — laughing, frowning, smiling. The deep lines in his face were years of emotions weathered into the rough shape of compassion and brown as the desert hills.

“Good, Sandy,” he replied with a wide grin. “You looked like you were having fun there with your friends.”

“I can walk home myself.” She stopped, and her face screwed up. “I can handle myself.”

“Don’t mind them little bastards. Life’s full of assholes doing asshole things to others to make themselves feel better.”

She got up and began walking across the schoolyard’s wilted grass, across the dusty baseball diamond, towards home. Her mom was at work, so she gave Sandy the key to the apartment that morning. She said, “Come straight home, Sandy. Do the laundry, clean the kitchen, and finish your homework. I have to work. Your little brother will be at the sitter’s. She’ll drop him off when you get home. So, go straight home.” Her mother warned her.

The old man with monsoon eyes straightened out, pulled himself up with the cane. “Not so fast.”

Sandy walked along the hot concrete, the old man close behind. Something in the air had become oppressive and sultry. The air had become so still that the fronds of the palm trees that line streets of Phoenix did not rustle. She and the man walked through an alley. No one followed them. The rough concrete walls were decorated with long lines and swirling patterns in different colors and in strange acronyms – the taggers left each other coded messages on the walls of their labyrinthine internet.

She stopped at a wooden fence where she could hear a large animal panting. A dog’s pink nose stuck out between the wooden slats. It breathed like a horse. “Posie,” Sandy said. She had named the dog that. It was a full-sized red-nosed pit bull as big as Sandy. Posie sniffed Sandy’s hand, licked it, and whined.

Sandy stopped and fed the dog her remaining peanut butter sandwich between the slats of the fence. They had never seen each other. Posie waited at the fence every day. Sandy fed her every day.

“See how nice Posie is,” she said. “If she were my dog I’d feed her whatever she likes.”

Posie whined and huffed through the thin slat of fence. Sandy didn’t see the face watching her from above. The moment was destroyed by the loud voice. “Yo, puta. Who are you talking to and what are you doing to my dog?!”

Sandy fell back wide eyed and frightened. “Nothing!” she shouted and looked at the face leering over the fence. “I like your dog. I didn’t mean anything.”

“My dog’s a fucking killer,” the man retorted. “Get out of her puta before I sick my pits on you!”

Sandy didn’t take long to drop the remainder of her sandwich and raise her chubby legs as fast as they could carry her. Then she heard an awful sound, a punt and the dog’s shrieking whine. She swallowed her breath hard and kept running.

The old man said, “Let’s get going. You’re going to get in trouble.”

Chirping and hissing noises emerged in the heat of the day beneath the ocotillo and iron tree. There were lots of animals hiding in the desert, even beneath the prickly short cholla. “Things aren’t always going to be like this Sandy. The monsoon will fill the ravine. The cholla will have big bright flowers when the clouds get over that mountain.” The clouds were gathering. The moments after the monsoon were best for Sandy. She would catch little frogs that jumped out of the dirt. And in the following weeks all the cacti would bloom behind her apartment.

“We are marten people. You know,” he continued, “your mother left Canada because of residential school, but she remembers. We were the marten clan. We protect our people. We’re warriors Sandy.”

The old man leaned on the staff, and Sandy remembered the story her mother told her. Mother had come home drunk, late one night, and told her all about their reservation and the grandparents Sandy never met. Her mother had had moved the family far away from Canada to Arizona to escape something. Her mother was proud of remembering her clan and knowing some Ojibway words. She told Sandy about ghosts, and bear-walkers, and berries.

Sandy knew martens were cats that lived in trees. They were little, but vicious, smart, and cunning. She wanted one as a pet. She would walk it to school and introduce it to Posie. They would be friends, and no one would make fun of them.

The sound of an ice cream truck broke Sandy’s daydream of living with Posie and her pet marten. “Ding a ding a dong a ling a ding,” it sang.

The ice cream trucks in the valley were caravans filled with fireworks, pop guns, amazing toys, and cold sweet treats. “There are your friends again.” The old man pointed to the children crowding around the ice cream truck. Three of the children who called her names and led the campaign against her stood by the truck, elbowing the others. Their backs faced Sandy as they argued over which treats to buy.

The little chubby girl took hold of a branch lying beneath the iron tree. Something beneath the tree rustled and hissed and rattled, and she pulled her hand out quickly with the branch. She approached one of the boys who taunted her in the schoolyard. He was pointing to a toy plane.

Sandy raised the iron tree’s branch over her head and brought it down with a loud whack on top of his head. The boy went down in a heap. After a moment, he rolled onto his back. His arms lay prostrate and blood began to pool on the lines of his forehead as he looked up. His eyes searched the sky until they found Sandy’s shadowy figure. Sandy was poised to strike again, the tree branch high above her head.

“Why did you do that?” he screamed, frightened and angry.

“Who’s fat now, you fuck?” The girl brought the branch down on his face. The boy put his hands up to protect himself while his friends watched.

The old man began to hoot and scream. “Get him, doll. Beat that sonafabitch.”

“I’m a marten!” she screamed, and hit the nearest little girl with the branch too. She hit two other people with wild swings so hard they broke the stick.

The children picked themselves up and scattered like fireworks in a pandemonium of “AHHHHHS!” The air was still for a moment. And then, the rain was a sheet coming over the mountain and racing towards them. Sandy ran home, remembering her brother. Behind her she heard the wind shake the iron tree. In front of her, large drops of rain pounded up clouds of dust where each drop landed on the earth. The sun became a red ball dropping behind the mountain. The sheet came pressing in, over the mountain, over the ravine, and over the rattling plants silencing everything in its own deafening noise. 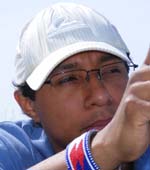 Jeffrey Kiyoshk Ross is a Vincentian/Ojibway writer in Toronto who grew up in Phoenix, Arizona. This has influenced his work to carry themes that deal with identity, perspective, and history, with humour. His journalism on First Nation issues has been published in many indigenous newspapers, but he also enjoys many other things, like guitars and cooking. This story is dedicated to my little sister, who had an imaginary friend, and who punched me in the head when I called her fat.