Hey you, activist person. Do you feel like you’ve been protesting for years and nothing much has changed? Maybe it’s time for a different approach. How would you like to get your hands on the real levers of power in Canada? Just form your own national political party. It’s easier than you might think.

To form one right now, stand up, hold out your arms and say, “The Me and My Ficus Party of Canada is hereby formed.” That’s it, and even that much is optional. In this country, any group can call itself a political party without seeking official sanction. On the downside, candidates can’t use the unofficial Ficus name on an election ballot; they’ll have to run independents. 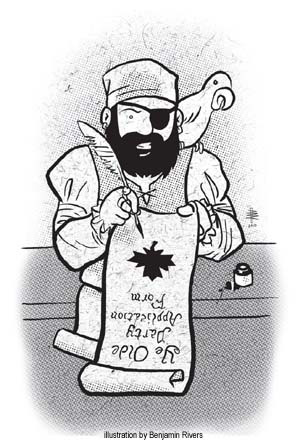 This is not a problem the Pirate Party Canada (PPCA) will have. They went from a few guys with a website to an official federal party in exactly 10 months. They’ll be running candidates in the next election, raising all kinds of awareness for their issues and maybe even winning a seat or two in Parliament.

“Not a lot of political parties on the scene care or have time for those matters,” says Daniel LaSalle, the party’s marketing and media relations director.

These issues affect everyone, and with increasing force as more and more of our lives move online. But tech people are feeling those effects first, since, as a group, they live online the most. The Pirate Party is full of tech people. Especially young tech people. The party’s interim leader, Jake Daynes, is 19 years old; the youngest leader of a federal political party in Canadian history.

“The Pirate Party’s ideas mainly reach non-voters,” says LaSalle. “People from 18 to 30 years old don’t really care about politics, don’t want to get involved, don’t see any motivation to put some time into it. Those people, a lot of them, are voicing support for our movement. To be thought of as a criminal, as bad as a child molester or a bank robber, because I download one or two songs off the Internet to preview an album, that rings a bell for me. There’s something wrong with the current laws, and that needs to change.”

If you’re serious about your party, you’ll want to follow the example of the Pirate Party and register with Elections Canada. The requirements are conveniently set out on the organization’s website (elections.ca) and are surprisingly modest. You need a unique name, an address, a party leader, at least three other officers, a chief agent (basically, someone to handle the money), an auditor (basically, an accountant to check your work), and at least 250 registered party members. That’s it. There isn’t even an application fee. Download all the forms from the Elections site and send in the paperwork. Once they’ve that you haven’t faked any of your info, your will be granted “eligible” status. Sit-out the 60-day waiting period, and you’re good to go when the next election is called. Easy, right?

“It’s a lot of work,” says Daynes. “Just getting people who had never met each other to out, sign and mail in paperwork, that alone a feat. One thing I want to do if we get a seat is force Elections Canada to accept digital signatures.”

Okay, so it’s not a weekend project, but the barrier to becoming a DIY political force has never been lower.

“When I first joined the organization, you needed 50 candidates nominated before you could be recognized as a registered political party,” says John Enright, media relations manager at Elections Canada. “Following court cases over the last 10 years or so, that number has dropped literally down to one. Provided you can field one candidate at a general election, you will be recognized as a bona fide registered political party under the Canada Elections Act.”

There are many benefits to being a registered party. You get your name on the ballot. You can solicit tax-deductible donations. You get a slice of national television time to push your platform. If you get a minimum percentage of the vote, you get up to half of your election expenses refunded to you by the taxpayer. You might also gain control of the government. The Pirate Party isn’t thinking that big just yet.

“Based on statistical data that we have, we’ve come up with several ridings that look very promising,” says Daynes. “If we play our cards right, we have a fairly decent chance of winning a single seat. We really don’t want to end up like the Marijuana Party or the Rhino Party. We’re not here to joke. We have a platform that we believe in strongly. The main thing right now is to get our voice out.”