Anahita Sharma, an artist, first heard about zines when she was in college seven years ago, but it wasn’t until this year that she made her first zine. After picking up Chicana artist Brisa Reyes’s perzine at an Ohio art market, Sharma was further inspired by avid DIY zinester Bre Upton. Better known as brattyxbre, Upton is popping up in TikTok recommendations pages around the world.

“I just had this feeling that I wasn’t cool enough to make my own zine, which was very silly looking back on it now,” Sharma said. Seeing artists like Upton compelled her not only to make her own zine, but to share her process to TikTok in kind. “It was almost like permission in a way.”

Her first zine was an eight-pager listing her favourite Hozier songs. She’s made several zines and shared her process and motivation behind each zine on TikTok, which led to the inevitable semi-viral zine tutorial.

Bre Upton’s rise as an influencer is inspiring people across the platform. From hesitant artists like Sharma to a Florida elementary classroom responding to Upton’s posts with zines about their favourite animal, what’s become known as ‘Zinetok’ is inspiring new zinesters with unprecedented reach.

When Upton first joined TikTok it was simply as a means to curb quarantine-born boredom. She had no particular intentions when she started posting videos, merely share her art and process. 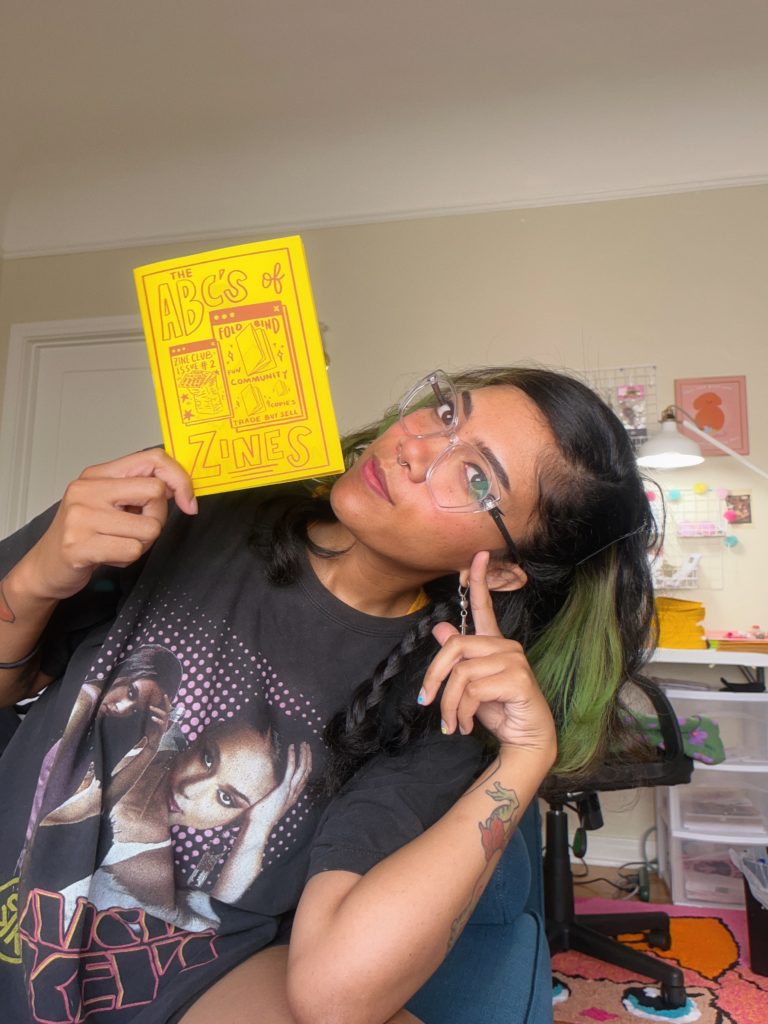 When you search any hashtags pertaining to zines on the app, Upton’s videos top the page. Her tutorials on zine making have over six million views combined. Upton is considered the heart of Zinetok.

Bre’s Tiny Print Shop, Upton’s art shop, is filled with dozens of zines, stickers, art prints, totes and more that she’s been able to sell to help sustain herself. The windfall from her TikTok popularity has allowed her to depart her retail job mid-pandemic.

Part of Upton’s rise on TikTok can be credited to the drop of Netflix’s Moxie. Upton’s first zine tutorial and the film dropped the same weekend and skyrocketed her account. The film, which followed a teenage girl starting a zine to empower her female classmates, inspired viewers and led them to Upton’s then-latest upload.

“It’s just the way she puts it out there,” said Sabrin Hilal, a collage artist and new zinester. Hilal has been sharing her collage work and art journals on TikTok for a while, but it was seeing brattyxbre’s posts that led her to zines.

“She’s just very encouraging,” said Hilal. “Even if you don’t really do much art, to kind of go and explore and try out different things [through zines].”

Getting more traction from her Zinetok videos only inspired Upton to share more.

“I was very much fueled by spite,” Upton said. She had come into the zine community after dealing with multiple press rejections. As an English major, she simply wanted to share her writing. Even in the zine scene she dealt with a lot of wariness and gatekeeping from white zinesters. As a Black and Polynesian artist, there was already a disconnect with the subjects other popular zines focused on. But these barriers only pushed her further to share on TikTok, a platform where she could bound over them.

“I remember how hard it felt trying to get into this community,” Upton said, “And I don’t want any other people of colour to feel that way, because we already have to deal with so much.”

Lani Dobson, a multimedia performance artist, also noticed how much TikTok’s become a siren’s call for those looking to connect more authentically. Dobson had been making zines for a while, mainly as a way to document their performance pieces. Once the pandemic hit and Dobson’s primary artistic outlet was out of the picture, they revisited zine making in a greater capacity. Dobson’s zine, Remember Me, is stitched up of heartfelt notes, inspired by an 18th- century yearbook they used to share with friends as a party favour before it became too brittle. While it had a tiny footprint on most digital platforms, it surprisingly blossomed on TikTok, suggesting the site’s love for zines goes deeper than one might expect.

“It hit the right community of people who wanted to see that kind of stuff,” Dobson said. “TikTok… allows us to share our authentic selves without the pressure to be polished,” Christina Torres, artist behind CYCLISTA ZINE, said about the parallels between zines and TikTok as a platform. “Zines come from a very vulnerable place as well.”

Madison Corley, the creator and editor of The Sour Collective quarterly zine, says Zinetok exemplifies what pushed her to make zines to begin with. “I’ve always been really interested in art and creating things, but also what other people create,” Corley said, “But then I didn’t really know what to do with people’s art. It kind of fell into my lap.”

Corley, like so many others, is combining the distant online nature of TikTok with the intimacy of zines. Zines as a medium are the perfect look at the intersection between the hyperspecific and universal. The communal nature of zine culture is a vital pillar to Zinetok as a whole.

“It’s rarely ever the norm in a new art community that people welcome someone by doing an art trade,” Sharma said. “The fact that people see me and… want to trade zines? That really speaks to how special the medium and… community is as well.”

No matter where Zinetok ends up in the future, or how TikTok holds up in the zeitgeist, its current members have and continue to remind folks what makes zine a universal and recurring art form, especially for marginalized folks — its accessibility.

Torres is certain that aspects like cost and access to printing materials can cause barriers, but at its heart, zines are an accessible medium against platforms that demand funding, algorithms or social media censorship.

“When you think about people who are not able-bodied, who can’t go to protests, who don’t feel comfortable talking about their vulnerabilities on social media, zines are always a really good way for us to express ourselves,” Torres said. “It’s hard to say anyone can watercolour, anyone can pick up acrylic paint or whatever,” Sharma added, “But zines are accessible. Most people have printer paper or an old takeout menu, and everyone has something to say.”

“The magazines and books you could find at Barnes and Noble — nobody can just print off 100 of those in an affordable way,” Upton said, “If you print them at home like I do, or you make them online —[as long as] it’s accessible for you, it’s a zine as far as I’m concerned.”

Adele Lukusa (she/her) is an arts and culture freelance writer, graphic design enthusiast and 2022 The Local Fellow. She is also a multimedia artist and her work can be seen in projects and publications such as The Little Book of Black Joy, Femme Art Review, Black Future Now’s Mapping Black Futures, She Does The City, and more.