IT LAY somewhere between fleeting sensation and articulation, where precise description of the strange usually put up its feet and set awhile. It was dreadful in its mocking evasion; a ghost dance on tongue’s tip, an ominous itch in the middle of her brain, a squirm of earwigs.

“Come, girl!” barked Aunt Emmaline in her dog-come-hither voice, tugging Abigail forward and making her stumble badly off time against the quick, sharp rhythm of Auntie’s hard low heels. “We are already late, thanks to your dawdling and dreaming and feminine megrims – by the by much too soon for my tastes. And try, try to act the lady, just for an hour.”

The distant screech of a rusty weathervane trailed shivers down Abigail’s  spine and out through the backs of her teeth. The light was queer and dead — yellow was still the best descriptor she had. The thinnest hint of breeze blew hot, and smelled of overcooked snake but tasted like chicken. A wicked shard of purple fork lightning flashed in neon veins and skeletal after image miles and miles away behind the steeple. No crack shook the world. No sound of rolling thunder followed (God The Great Beer Gut up at the lanes, always strikes by the almighty.) Its concussive absence was  replaced by the rush and boom of the closing of the heavy church door as Abigail and Emmaline entered Our Lady Of The Blessed Harrows to kiss a little ass for the sins of their kind.

The air conditioning was out. Naturally. it was thick and close inside; perfume and eggs, sin and ass. Abigail and Emmaline padded from the vestibule into the church proper with the soft thump of timid feet on carpet on wood, so quiet, yet conspicuous as hell. They had missed the singing, and the big fat priest was up there yak yak yak and the place was packed. Her Auntie sure thought that these were the end times, and it looked like she wasn’t alone. Seemed most of the town had turned out, feeling in need of a little churchin’ up, maybe cage a quick signature on some death insurance. J3ZUS H. PUMPKINSPICE LATTE THE FIRST in a big, loopy scrawl, with little hearts over the ‘is’. That was good (stupid good, anyway) — she’d have to remember that. If she pulled out her phone to make a quick note, Aunt Emmaline would not be pleased. Consequences would follow. That was why her phone stayed home and she’d have to remember that. Remember… aw, fuck. It was gone.

They pushed into some people in the back row, right side stage left – Sinister or not? Snuffs and shuffles issued from the distraught and the displaced as they plunked their bony asses down onto the hard, tortuous wood. Abigail’s  was already sore. She hated this dress, these shoes, and though she wore the black underwear – her favourite – it stuck damp to her sore ass and so she was none too fond of them right now, either. Her friends would be down the crik, or in the woods, or behind Ned’s doing what they did, which was nothing and everything, free in the timeless magic of a summer Sunday morning.

And the big fat priest droned on, trying to be thunderous but sounding weak. He was fifty shades of pale, and teeming with flop sweat. They were all gonna drown in it, a river of stink. Might as well tell the one about Noah, Dickwad.

It was hot, uncomfortable, smelly, and boring.

Abigail and Emmaline were late to arrive, but they weren’t the last to arrive. A small round man in a brown pinstripe three-piece suit squeezed in beside Abigail, who thereby lost the aisle. The man sat close and smelled like

a bowl of Count Chocula if you used orange juice instead of milk? Not bad, not great.

His big, scratchy thigh was pressed up against hers.

A fat maggot a’squirm under burlap.

She shivered. They were packed in tight.

“Sure.” said Abigail, shifting uncomfortably, but to no avail: there was no quarter given.

“Hush!” spat Aunt Emmaline – subaudible but with some force and menace, it was like a super power – never taking her eyes nor her faith from Father Roundboy, who was now looking seriously ill but blathering ever onward. Abigail watched him die for a while, then turned to sneak a sidelong glance at The Maggot Man.

He didn’t have a face.

Well, of course he did, two eyes, nose, a mouth. Everyone had a face, except The Question, her favourite DC superhero. Tommy’s was Mister Miracle.

He didn’t look like anybody, or anything. A face, sure, but her mind couldn’t hold onto it. A liquid face, flowing without motion, blurring but sharp. It was a perfectly normal average face that she couldn’t quite see. He also had a hat, and at least that was fixed in place. It was a brown bowler that sat far too high on his head. It wobbled slightly as he turned to face

“This,” he said, “Is the best part.” and gestured towards the pulpit. His voice was perfectly normal, if a little high pitched. It was also cicada bugs.

Now the thunder boomed as The Fat Father crashed to the earth, the echo reverberating in the still, dead air. His body jerked and clutched, and thanks to the Bluetooth mic he used to preach the damn gospel, the whole of his sad and ragged and dripping flock heard every gasp and croak, every gurgle and swear of his final exhalations, his last words. But no prayer. Funny, that.

The audience gasped and gawked and muttered and fanned themselves with fans and song sheets and didn’t they know that just made them hotter? People rushed the stage. Chaos reigned. The maggot squirmed and the smell of overcooked radiator eggs was cloying. Aunt Emmaline was rapt, fixed, taking it all in to recall in perfect detail, to recount for years to come over witch’s brew and cucumber sandwiches.

Abigail was watching as transfixed as anyone when The Maggot Man said “He. Might have. Told. The one. About. Suffer the little children. Dickwad.” his voice was crickets in mud, wasps through a stack of Marshall amplifiers. It was also light and pleasant.

It was also her voice.

No one else paid him any mind. His face swam and was still and she still couldn’t see it.

The flock of sheep prayed and gossiped, thundered and stumbled, sound and fury, and did nothing.

“Thirsty work” said/buzzed The Maggot Man. “Tell me, where might one find the saloon in this one horse town?”

“Excellent. I am as dry as a Pharaoh’s grave. A tipple or three will put me right, but that’s just between you, me, and the holy ghost, hm?” he winked

and nudged her playfully/unpleasantly. “I am supposed to be escorting our fat friend up there to, well, his last stop, but what’s another hour in forever?”

“What, like, in a hearse?” said Abigail, stunned, floaty, flummoxed.

“I said, have a pleasant afternoon,”

The pew creaked like chalkboard fingernails as he got up. She shivered with the tickle and caress of  the thigh maggot’s departure, its’ press and clammy weight thankfully gone. People ran hither and yon as he stepped into the aisle and calmly shook out his rumpled suit, and pulled it from the crack of his plump ass.

He bowed slightly and tipped his hat to her. He might have been bald, or had hair, but one thing was clear: he had horns.

As the crowd watched and raged, The Man With The Horns/The Maggot Man strolled casually up the aisle. The people naturally avoided him in their frenzy, never sparing him a glance. Maybe they felt a chill in the demon air, or a grave goose, or an endless fall into the void. As Abigail watched his retreat, fascinated, a tail snaked out mischievously from the vent of his suit coat, waving cobra-like in the air before he caught it and tucked it back in, never missing a step. Then he was gone into the shadows

The priest’s last word was “…cunt.”, shot loud and clear from the speakers on high as no one had thought to flip – or could find – the off switch.

The ladies escaped the hell of the church and the madness of the scene and stepped back out into the yellow day. Aunt Emmaline was strangely silent, but that wouldn’t last long. It wasn’t nice out but it wasn’t not nice either.

Far down the road Abigail saw a riderless horse standing in the middle of the street. It may have been black or white or brown. It was horse-shaped, anyway. It was strange but at this distance – maybe because of the heat haze, maybe her mind was playing tricks – it looked like it was on fire.

(not a hearse but close enough)

A black car sped by nearly hitting them, but neither noticed. Blaring from its speakers, the Doppler effect stretching the song madly out of true, was Black Dog by Led Zeppelin.

‘Got a flaming horse, can’t get my fill’

before the riff thundered in, then faded into the ether.

Abigail and Emmaline crossed the street, headed for home. Silent lightning flashed, purple on yellow. A big fat bug droned by her ear and followed the song. Distant sirens blared and rose, coming their way. They sleepwalk staggered away from the quaint little church, Emmaline’s heels no longer a stiff and measured cadence. Neither woman looked back.

One day Abigail would write all of this down, but not today. She would let it simmer. Percolate.

Once home, maybe Auntie would have a nap and she could quickly change and run out and find her friends. She would tell them all about the dead priest, and the man… the hat… Fuck, it was gone. 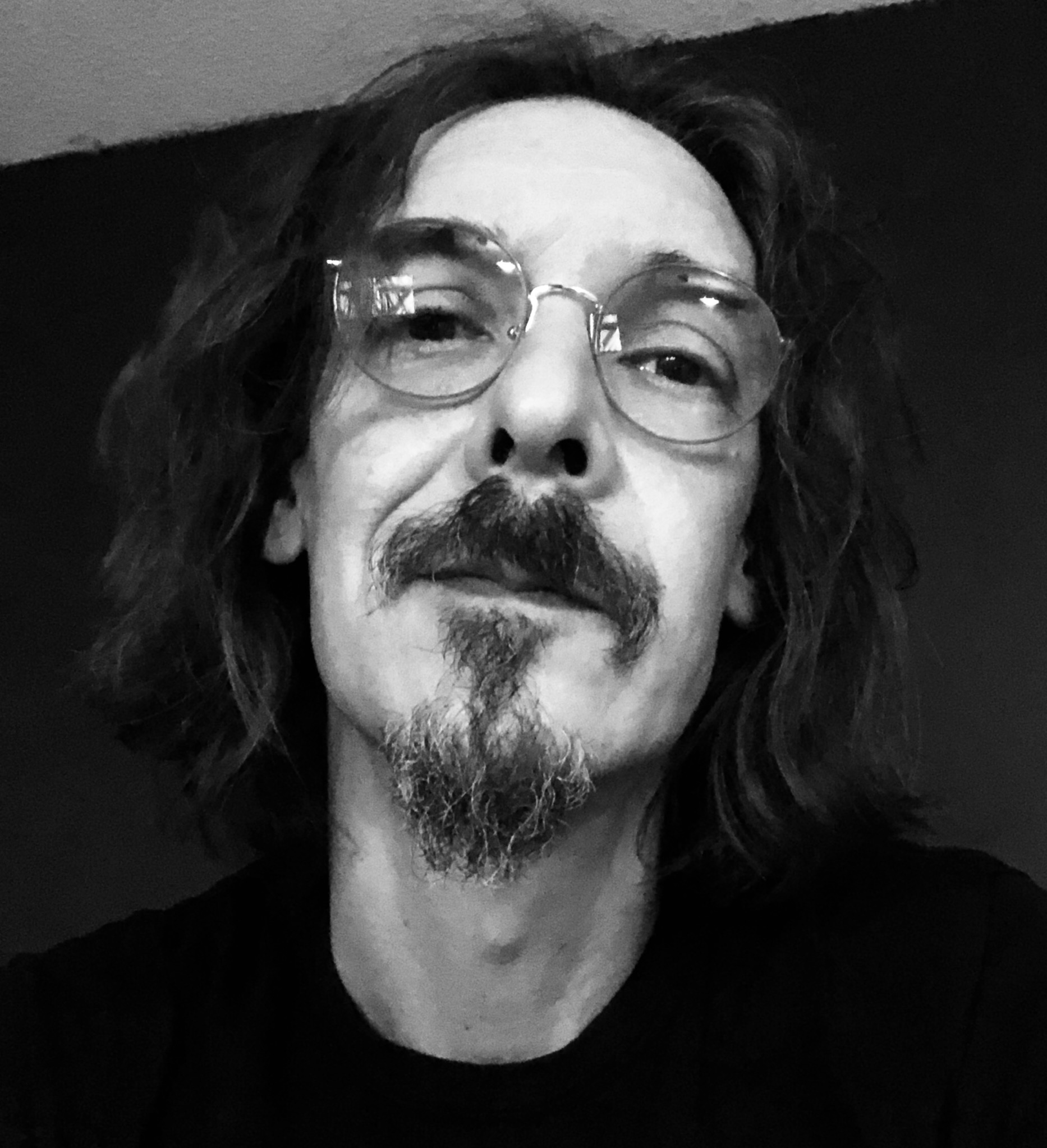 Dave Mercel grew up on Sesame Street, comic books, and horror novels, and has recently published the short story ’Little Cockroach God, Little Cockroach Country‘. He lives in Toronto, Canada with a beguiling sense of optimism and a banana he really should eat today.