A voice whispered into my ear.

It was so quiet, so faint, but as I lay in bed tonight, I knew it was real. For days, I’d heard the footsteps in my home, at times when – despite the fragility of my mind – I knew I ought to be alone. In a painful sense, the cadence of these footsteps was familiar, and I recognized them as the movements of someone whom I longed to see.

In the recesses of my mind, I’d known that inevitably, Charles would reach out in his own way, although the specifics of when, why, and how were always unclear. His distinct pacing, drifting back and forth throughout the home across the old, creaky hardwood floors of the hallways, downstairs over the green carpet, worn stiff and thin over the years, and sometimes, right inside this very bedroom. Almost without realizing, I’d began to train my ears onto the sound of these footsteps. I strained my ears in anticipation. Over time I learned to mentally quiet the constant noises of the life-monitoring, life-preserving devices around me, focusing on the pauses of quietness in between. Focusing on the sound of Charles, the asymmetrical rhythm of his movements betraying his identity. One step, the first, was always heavy, weighted with intention and sure in its direction. The second, for a fleeting moment, dragged against the floor so that it was less of a step, and more of a brief shuffle – a frail attempt at mimicking the strength and determination of its predecessor. Over and over, these steps would repeat – sometimes, for only a few moments before they disappeared. At other times, they would move back and forth about the house well into the morning, quietly tapering off into silence by morning. Every night, I waited to hear these familiar echoes of a life once lived, drifting about like buoys in the ocean, keeping me afloat within the deep, expansive abyss that was the uncertainty of life, and the uncertainty of tomorrow.

It had been – or rather, it felt like it had been –a lifetime since I’d last heard my name in that deep, baritone voice. Since I’d last heard my name spoken with such attention to detail and care given to each unique syllable. Those who came ­in and out of my room – doctors accompanied by nurses, personal support workers in their cheeky uniforms, lawyers with their paperwork and pens – were always in a hurry, moving and speaking with such haste, too uncomfortable to linger and bare witness to the slow deterioration of my mind and body, along with my increasing dependence on machines and pharmaceuticals to postpone the inevitable. The certainty of my passing hung like a vignette within the corners of my bedroom. With each new prognosis, each new medication, each new beeping, blinking, humming machine, the vignette grew deeper, moving closer and closer towards me.

Their hurriedness manifested most significantly in the way that they all pronounced my name. But Charles, he always spoke my name with the sweet, loving musicality it deserved. He knew how to let his tongue dance to the melodic ups and downs of my name, turning each utterance into a brief song of praise every time it passed his lips. Ey-ho-nam! The song would always begin the same, with Charles raising his voice to a sharp bright register, as if excited at the opportunity to call out to me, or make mention of his wife. Towards the middle, he’d lower his tone so it manifested from deep within his body; from a powerful place, resilient to the erosion of language and voice. His song would close with a strong, unambiguous finality, with Charles holding the last syllable tight between his lips, like a secret verse not to be sung aloud. And here, tonight, his song graced my ears once more.

I wanted so deeply, so powerfully, to open my eyes and to see Charles in front of me. But in spite of this longing, my eyes remained closed. I was afraid. Charles’ death had been sudden and violent. The doctors and nurses had done their best to explain to me that Charles’ heart had failed. That what I had witnessed when I entered the living room, and found him with one, tense hand clutching his chest, and the other the armrest of his tartan sofa, was Charles having a severe heart attack. His face was frozen in a painful, nightmarish contortion.His eyes were wide and fixated squarely in front of him, as if staring at an invisible, marvelous curiosity.  Indeed, this face inspired quite a few nightmares. Perhaps it was fear that finally forced my eyes shut and drove me out of the living room and back into the kitchen, pressing my body up against yellow paisley-papered wall as if to hide from the wretched state of Charles’ body, and whatever evil made it so. Perhaps, it was fear that led me to call the Reverend, alerting him of an emergency that required his immediate attention, instead of calling the doctors as I rightfully should have done. But it was surely fear that kept me out of the living room since that day – the pain of this cruel loss was still raw, like a dreadful bruise within my soul that remained tender to the touch.

I breathed in and tried to steady my thoughts. The melodic sound of my name had triggered a series of fragmented memories that lacked context, logic, and order, playing themselves in my mind like channels flipping across an old television set: a memory of my feet, bare, walking over red dirt along a roadside back home in Ashongman; a moment during a hot summer day, with Charles and I laying our backs on a kente blanket, watching red and blue kites twist and turn above our heads; a scene from within my living room, with Charles sitting in his tartan chair, reading No Longer at Ease…

Tonight was Sunday, of that I was sure. I knew today was Sunday because the windows were left open, which the personal support workers did to offer some reprisal from the stale are that circulated around me. On Sundays, the dry, hot air would flow into my bedroom, lifting and billowing the curtains in graceful patterns, wildly announcing its presence as it entered. How I enjoyed watching the curtains dance with the wind! Lifting, turning, twisting, and falling as if masterfully choreographic to move exactly so, with each performance lulling me into a deep, welcomed sleep.

Suddenly, as if conjured by some strange magic, the room filed with an incredible smell. One so familiar to me it caused my heart to race, and a lump – like a smooth avocado stone – formed in my throat. The smell intensified, with subtle notes of garlic and onions wrapped together in a sensuous, earthy aroma of tobacco. The combination of smells so intense and alarming, that my eyes flew open, and I left out a gasp.

There, in front of me, was Charles. Just as I’d remembered him best – with skin the colour of cacao beans, and hair like tight black wool, shaved closely to his head. His face was so close to mine that I could reach out and touch him, but I didn’t dare, lest my excitement cause my heart to beat so quickly it ceased to beat at all. His face was lined with the familiar tribal scars we both shared: three diagonal scars cut with a sharp blade onto the height of each cheekbone. The scars were shallow, yet each marking carried a great depth in its meaning – cut by elders with precise intention, leaving a different story and teaching behind.

“Ehonam.” I heard it again. His voice was now a whisper, lighter than air itself. My hands, which lay folded across my chest, yearned to touch his. To trace the scars along his face and read the words etched into them by our elders. I wanted to say his name, too. I wanted to move. To smile. To do anything to cement this moment deeper into reality. However, the thought of even the slightest movement, or the faintest sound, destroying the complex, delicate combination of perfect chance and circumstance that made this moment possible, was enough to keep me perfectly still and silent. And so, still and silent I remained, breathing in the familiar scent of palm oil and tobacco.

I watched him smile at me until I could not watch any longer, and try as I might, my eyes slowly began to succumb to the weight of fatigue. How long had it been? I could not know. A new, unfamiliar rhythm took over the beating of my heart, as if beating to the tune of a slow, exaggerated waltz. My breathing also fell within this odd measure, and with each new breath that filled my lungs, my heart slowed to keep pace. My vision became blurred, and the sight of Charles – a true sight for lonely eyes – began to fade.

And then it was dark. I hung onto the last remains of consciousness, desperate to cling to whatever was left of this moment. Then, like a parting gift, a beautiful song touched the no longer tender bruise on my soul. 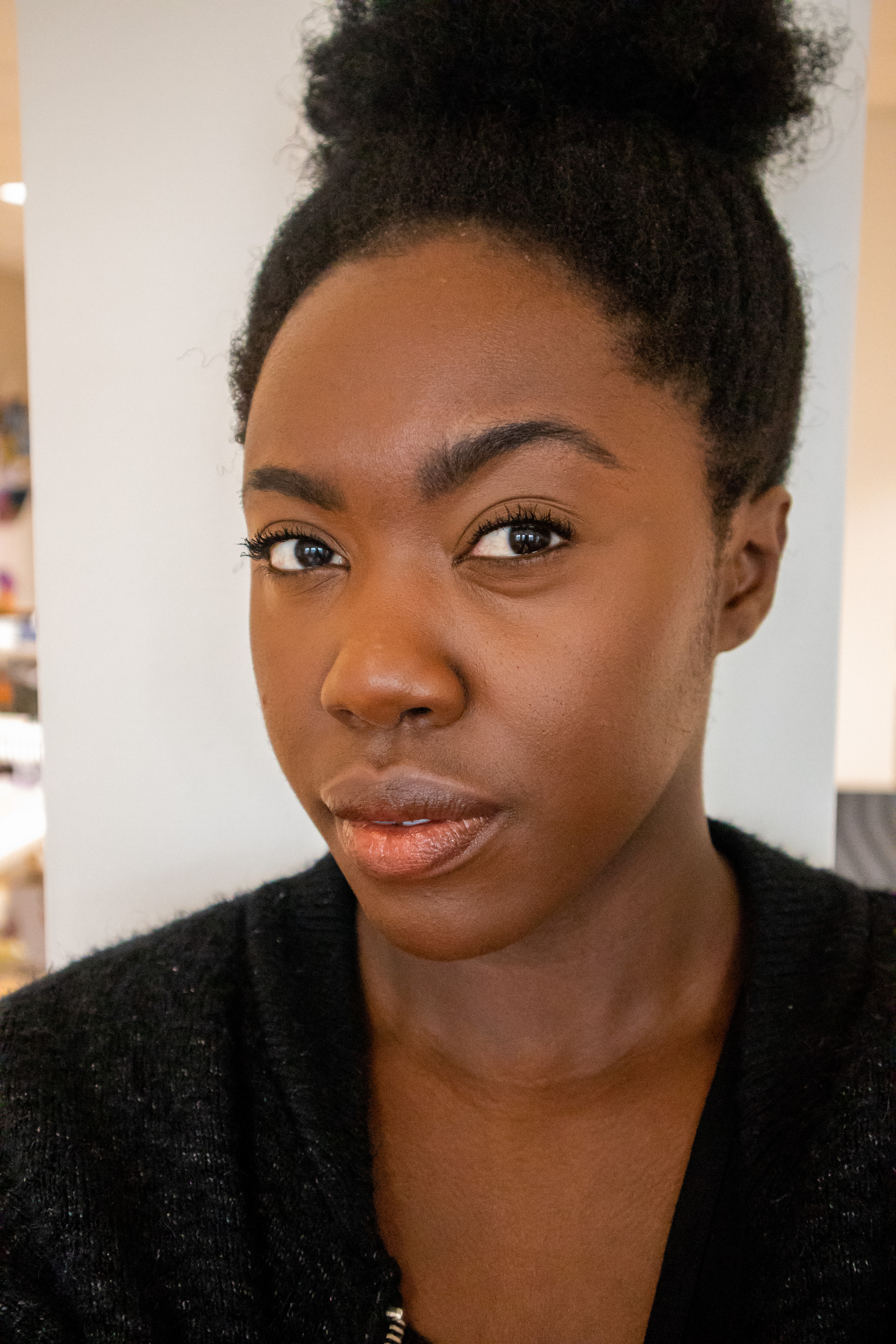 Adom is a writer, arts and cultural worker, and lover of community who hails from Scarborough.
She works in short fiction and prose, and is inspired by the poetic potential of words. She has performed her work for the Draft Reading Series, and more recently, the Tartan Turban. She is currently one of four 2019 Writers in Residence at Firefly Creative Writing. Currently, she is working on a series of short stories called The Rain, which she hopes to complete by December 2019.

When not reading, writing, or thinking about reading and writing, Adom works as the Program Coordinator for East End Arts, a local arts service organization which supports the east Toronto community through the transformative power of the arts. At East End Arts, Adom has produced the Weekend of Words festival for three years, developing arts and cultural programming for the east Toronto community.