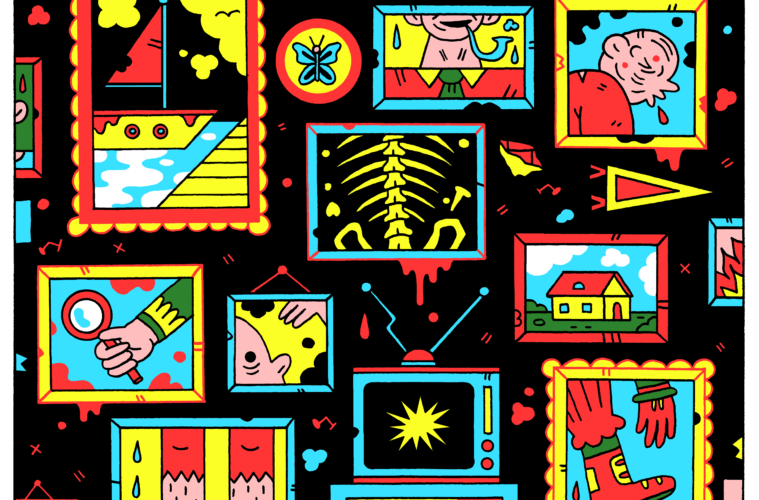 SHADOWS ROSE, fell, and rose again against the walls of the small house, the sunlight cutting through the open blinds. The days were long, then short then long again.

Time passed and the house was still and silent. So were the pictures, frozen in pose inside of their frames throughout the house. Until they weren’t.

The woman, or a version of her, was the first to move. It was not that she, nor any of them, had not moved before. The pictures in the house often relaxed from their poses and moved about the small area allotted to them by the borders of the frames. They would speak to each other, usually about the goings on in the house and the life of the occupants. For they were them, or had been. They were the people but had been captured. They were locked in an instant of time. It was forever now in the pictures, but they did not mind, for they had purpose, and they could enjoy the goings on in the house and see the progress of their living selves as they moved through life and time.

There was a schedule, though, and a method to how and when they relaxed their pose and when they spoke to each other. The pictures throughout the house were a network. Their view was limited to where they were, and they used each other to stay updated. They spoke to each other during the day when the man and the woman were at work and the child was at school. They did not move during the evening or on weekends unless they knew of a scheduled event when the family would be away. And while there had been times when they’d been close to being caught, those instances were few and far between.

It had been a while, though. Too long. And so the woman spoke.

She stood up from the bench where the family was sitting. There was enough room in the frame, but barely, and her head came all the way up to the top of the picture. The man was on one side and the woman on the other with the child in between them. Behind them was a body of water with boats moored to a dock. It looked to be a dock on a lake, but the picture was focused mostly on the family, and it was difficult to know for sure where the picture had been taken.

They were on the shelf closest to the front door facing in towards the living room. When she stood, the man and the child tried not to move. But their eyes followed her as she did.

“Has anyone seen them?” she called out to the room and the other pictures. None of them responded.

“Hey, I’m talking to all of you. I think it’s ok now.” She looked out from her picture at the others that she could see. Down below on the end table next to the couch were two toddlers in pose. One was her, a candid snapshot of her little self smiling up at the camera. The other was  the man, a classic studio portrait of his little self smiling stiffly against a blue background. Across from them was another shelving unit that contained pictures of the child in various states of growth. She as a baby and toddler and young child, all the way up to the age she was now.

There were others too, pictures of his and her families, their parents alone and together with other members of their extended families. There were portraits and candids of weddings and parties and vacations. There were small frames and there were large, ornate frames on the wall across from the front door on the main wall of the living room. There were color pictures and there were others in black and white. The pictures were of the living but also of those who had passed. There were some of those who had departed that the child knew and some that she did not. There were older ones, too, relatives that the man and woman had never met but were part of the family’s story nonetheless.

“They’ve been gone for too long. We should talk about it.”

The other pictures did not answer, but did begin to stir.

“I’ve been thinking the same thing,” said his mother, framed with his father on a shelf in the dining room, where they stood at the top of the stairs outside of his childhood home, peering down at the entirety of the room. “Honestly I’ve become very worried.”

The man in the picture by the dock cautiously stood up next to the woman. He looked around the room. “We should just be patient. They always come back and they will this time too.”  He watched as the others began to move around and whisper amongst themselves.

“See what you’ve started?” he said crossly at the woman. “What if they walk in and hear us?”

The girl between them slumped down on the bench, crossing her arms.

The woman looked down at the girl, then at the man.

“So what if they do? And besides, I’m not sure they are coming back.”

“Of course they are.”

“How can you know?” Another him spoke from down the hallway. “What if they don’t?”

“They will,” the man said, but sounded less convinced than he did before.

“I agree with the girl,” the woman’s framed father said from the shelf below. “There’s nothing to do. I’m tired of looking at the television like that.”

The man looked at the TV. There was no sound so he had not noticed, but now that her father had pointed it out he stared at it. It was on, but there was no picture and no images, just spinning black and white fuzz filling the screen.

“I want to watch something,” the girl on the bench said.

“The back door has been open for a while.” The voices from the pictures on the refrigerator began to chime in.

“It has?” the man asked. It wasn’t like them to leave doors open, especially for this length of time.

“And there’s a chair on the floor. Like knocked over?”

“There is?” the man said. “Why didn’t you say something before?”

The voices from the kitchen began to murmur and chatter and blend together now and were indistinguishable, except that their concern was palpable.

“What could have happened?” the mother asked.

The voices rose now from all over the house and the images moved about the frames. They called to each other from the second floor and from the basement. The girl pulled her legs up onto the bench and put her head down towards her lap and covered her ears.

“I told you,” the woman said to the man.

“Told me what?  We don’t know anything. Hey, everyone quiet down. Please be quiet,” he implored but they continued on. The younger pictures of the man and the woman, along with the baby pictures of the girl began to cry. “I said be quiet. Be QUIET. ENOUGH!” he shouted and as he did the other pictures of him followed suit until the clamor and din subsided and stopped, save for the whimpering of the little ones.

“You all too. Stop your crying.”

The woman glared at him. “They’re just children. They’re frightened.”

“Please. They are us. I can tell me to be quiet,” he said, and they finally were.

It was quiet for a bit. There was whispering, but they mostly looked at the man and the woman with worried faces.

“What now?” the woman asked.

“What do you mean?  Nothing now. We’re their pictures. We sit here and wait.”

The woman looked around, from the sides of the frame and behind her towards the water. She shrugged. “I don’t know. We’ve never tried.”

The man looked around the room but it held no answers. He saw the framed pictures of the older ones, the ones long gone, the ones he had not known when they were alive. “Grandma,” he said, addressing one of them. She was a great-great grandmother, or something like that, but he called her Grandma. “Grandma can you see anything?”

The older ones rarely moved from their ridged poses and spoke even less. Now, though, she moved forward and cleared her throat. “Nothing,” she said from her frame high up on the wall across from the man.

“You can’t see anything?”

The older ones were directly across from the front window. The blinds were open and had been for a while.

“I can see. But there’s nothing to see.”

The man looked back at her and didn’t know what to say, so he was silent and so were the rest of them.

The shadows grew long on the walls and the day turned to night. The images did not speak but did not return to their poses. The little girl slept on the bench with her head in the woman’s lap. The man could not rest but instead sat on the bench and peered into the dark. It was absolute, as was the silence, and he realized that he had not noticed it before.

The darkness faded and the shadows hung low as the light emerged. The images stirred.

The man looked at her, then around and behind. “Where?”

She shrugged. “I’m not sure. But we’re not staying here.”  She put her hand on the sleeping girl’s shoulder and shook it gently. The girl opened her eyes and looked up at the woman. “Come,” the woman said and started to stand up and the girl did too. She struggled to her feet, yawning and rubbing her eyes.

The woman took the girls’ hand and led her around and behind the bench. They started to walk the path towards the dock and the water, and as they did the rest of the image began to move. The water lapped at the dock gently and the boats bobbed slightly. The sun shone from above the tree line and its light spread out on the water, a shiny path cutting through it.

The man watched them go. He stood up and looked back towards the inside of the house. The rest of them, the images in the other pictures began to follow suit. He watched as they silently stood and moved back in their frames. His mother and father waved at him as they went.

He looked back at the woman and the girl. They were all the way to the dock now. The girl was near the edge looking down at the water. The woman looked at him, then at the girl.

“Come, girl,” she said, and the girl ran up to the woman and took her hand again.

“Are you coming, Daddy?” she asked him.

The man took one more look around the house. There was nothing to see, except what he saw every day that he had been in the picture inside of the frame.

He looked back at them. “Yes,” he said, and moved around the bench to the path. He reached them and took the girl’s other hand.

He took one more look back. The inside of the house was visible, but distant, as if it was a picture in a frame. “Let’s go,” he said, and didn’t look again. He looked ahead of him and smiled, and they walked out of the frame.

The house was still, and there was nothing, not even a picture in a frame left to bear witness to its silence. 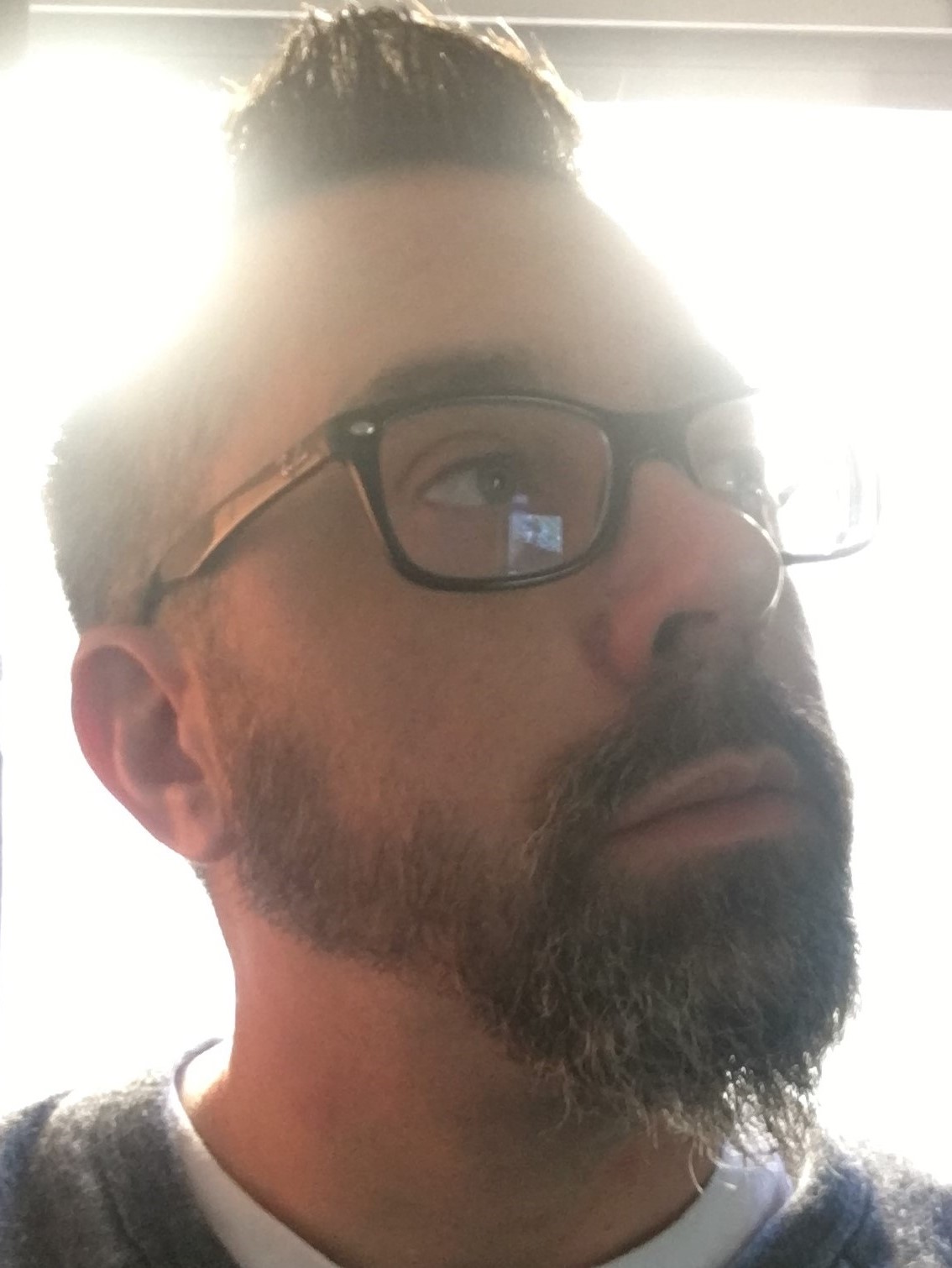 Aaron J. Como is a writer from Milwaukee, WI. His work has appeared in magazines such as Drunk Monkeys, Red Fez, Five to One, The Creative Truth, Spank the Carp and The Write Launch. Find him on twitter @aaronjcomo.