The night I decided to leave my home, I hacked my hair off with kitchen scissors. My sister Trina watched with concern, sucking on the hangnail she created on her thumb. It was dark, but I could still see this. An older sister’s intuition is a constant force, like gravity. A younger sister’s, however? Well, that’s a different story.

She couldn’t see me with my new razor-short hair, or that I was using the bangs to mask my feelings. Maybe she didn’t want to. She was only nine and afraid, not wanting me to go.

I made the decision to skip town a few days after I was caught kissing Birdie Louver under the shadows of the bleachers by the football field. Kissing makes it sound so innocent; her hand was up my skirt. Nice girls didn’t do things like that –, not in this family, or this house, or this town. Mother planned on sending me to a Christian finishing school, and well, I would be having none of that.

Trina didn’t want me to run away, and I reminded her I wasn’t running away. I was having an affair with the night.

“Where are you going again?” Trina whisper-plead.

“I have a friend out west. I’ll be staying with him.”

‘Friend’ was a generous term, ‘out west’ even more so. One of my ex-classmates — a queer boy named Robert — lived with his partner just south of Mobile. He always said I was welcome any time, but I seriously doubted that he meant this was what he meant. Alabama was twice as conservative as Orlando, and my plan was flimsy at best, but I couldn’t give Mother the satisfaction of sending me off.

Adjusting my outer appearance had been easy. I cut my hair into short spikes, wore pants and a blouse much darker than my own. I’d bought them at a rummage sale the night before my departure, along with the train tickets that would get me out of state.

Trina watched from the dining room table as I ruffled through my purse, making sure I had everything. If words could clutch my legs, hers would have left me paralyzed. “Glitzi, please, please don’t go.”

“I bet you’ll never come back.”

I neither confirmed nor refuted her claim. It wasn’t my fault that my true self wasn’t welcome, and likely would never be again, most likely. She was too young to understand this, so I told her, “You’ll be fine.”

“You could stay here,” she begged. “Try to work it out with Mother.”

With the snap of my suitcase, I rose like the moon. “It’ll be better this way,” I said. “I promise I’ll call and write, someday.”

Mother was asleep, and Trina should have been as well, but once she found out about my plan, she insisted on following me to the train station. It was after midnight ,now and my train didn’t depart until six. It was a bit of a walk from our house to the station, which was located on the other side of town, by the hospital.

“You don’t have to come,” I reminded Trina.

She stood firm in her saddle shoes. “I want to see you off.”

“How will you get home?”

She said she didn’t care about that. “I’ll walk or catch the bus or something.”

I decided Trina wasn’t my problem as I shoved my head into one of Mother’s hats. It was a relic of our late grandmother –; big and gray with fake flowers, a hunk of fabric like a slope on the right side of my face. It was more feminine than the rest of my outfit, but it masked my appearance well enough. I wordlessly collected my things and unlocked the screen door. It shut silently behind me, the soles of my loafers mute on the concrete. I paused to waited for Trina to catch up, but she stood inside the house, watching me through the screen door, fingers grasping at the mesh like a worker bee yearning for its queen.

She ran outside quickly; the screen slapped into place behind her. I pressed my fingers to my mouth to shush her. When she reached my side, she pulled took my hand free of the suitcase and held tight as we walked past the out mailbox, white with black lettering boldly declaring, “THE GOODLY RESIDENCE.”

We were quiet as we on our walked downtown, the late night smog hanging close to the ground. A foreskin of cloud hung over the dark side of the moon. The stars were lustrous above us, not yet having the cover of city lights.

“I love you,” Trina said after a while.

I dismissed her with a pensive, “I’ll write.”

Selfish as it was, I wasn’t thinking about my sister. I was thinking about Birdie, and what she could be doing right now. Nothing like I was doing, that much was certain. Her mother was a hippy. The whole family had missed school to travel to Woodstock back when we were in grammar school. My mother was prim, proper, and Christian, and having raised me and Trina to hate free thinkers, and weirdos, and especially homosexuals.

Nothing I had done had ever pleased my mother,; from playing sports to participating in theatre arts, or especially when I shortened my name from Gormlaith to Glitzi. One of the last times we talked before Birdie, she was making dinner in her frilly apron when she asked, “Gormlaith Ellen, what is the matter with you?” Her red toned lips had puckered over the disapproving words. I’d been sent home from school for burning my bra along with some of the other girls.

“I was making a statement,” I had said, flat.

“What kind of statement.”

Trina — who was listening in the living room — had laughed to herself.

“And what about that incident in the library,” referring to our being caught with a William Burroughs book, “Or stomping on that boy’s foot who tried to ask you to the movies?”

I held back a snicker. “That was a statement as well. His feet were small.”

She slammed her hand flat on the counter, glaring at me under perpendicular eyebrows. Like everything else in her world, her eyebrows they were perfect, feminine, and wonderfully straight.  It wasn’t pertinent at the moment, but I knew now that it wasn’t about the books or the bras or the boys. She was used to the way things were: – black and white. But I was born in a whorl, the same satiny hue of the night. Trina loved me now, but she was getting older, and understanding more. In due time, she would grow to dislike me, just as Mother did now.

We reached It took us a while to reach the train station. The lobby was empty, save for a tired man bent over a Redbook. I wondered if he was queer. Anyone could be, and I would never know it. Then again, I didn’t know many men who perused frequented Redbook.

Trina tugged at my hand. “I want a soda.”

I handed her two quarters and waved her over to the vending machine. At the counter, I checked in at the counter, and the man with the Redbook verified my pass. He looked down and flushed when he noticed my eyes on taking note of his reading material. He cleared his throat and said, “There’s, uh, nothing else to do around here.”

With a nod, I turned around to find Trina settled on a bench with a grape soda. She sucked back the can until it was empty, a vague purple stain forming on her upper lip. I should have called Robert, at least to let him know I was coming, just as I should have left my mother a note goodbye. Instead, I focused on my little sister, placing her head upon my shoulder.

I didn’t respond this time. It wasn’t possible for me to answer her when my own throat was clogged like a dirty sink. When Trina noticed my tears, she told me to stop.

I shoved her away. “Just let me cry, all right?”

We resumed our little silence until my eyes were dry. Hours must have passed, because an announcement came overhead that the 5 a.m. from Orlando to Mobile was now boarding. I proped my sister upright and left her on the bench. She chased after me, her face crashing into the back of my legs.  She cried, a crunchy, juicy sound informed by snotty gasps. Her arms reached out like a mallard’s neck the more I tried to push away.

“Is this because of Birdie?”

I asked her how she knew about Birdiethat. and she told me, “Mother has been talking about it for days,.” she said.

I stood myself straight. Well. That was that.

“It doesn’t matter to me,” Trina said, still trying to hold on. “You’re my sister and I love you and I don’t want you to go.”

I knelt lowered myself to her level, used my thumbs to clear salty water from the skin below her eyes. “I don’t want to leave you either, but you have to understand that, I must.”

She hugged me tight and told me she loved me. I pet her head and reminded her that I’d write. I pressed a few dollars in her hand for the bus and told her to ask for directions from the driver if she gotwere lost.

“I wouldn’t be lost if you didn’t leave,” she said.

I kissed her on the crown of her dishwater hair and went to board a train that would take me to someplace far away from the injustice. It wasn’t fair to her, and Trina might not see this now, but one day she would understand this was the right thing. 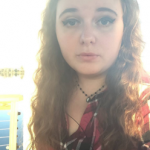 Anastasia Jill (she/they) is a queer writer living in the Southeast United States. She has been nominated for Best American Short Stories, Best of the Net, and several other honors. Her work has been featured with Poets.org, Pithead Chapel, apt, Minola Review, and more.