I was twenty-one then, lying on the carpeted floor of a darkened living room with my family asleep in separate rooms above me. I was gazing up at the kidney-shaped underside of our brass coffee table and thinking about what I’d lost over the course of my life: the mistakes I now knew better than to make and, consequently, the feelings I’d never again know. It was just after midnight when Mia called.

“Can we get pancakes?” she said.

I slipped into my mother’s fleece pullover and waited out on the porch for Mia to pick me up. The clouds had come down during a storm from earlier in the night, cotton-stuffing the gaps between houses and absorbing all the neighbourhood cats. We drove through the fog to Denny’s, where neither of us ordered pancakes.

I asked Mia how she was doing, if it was getting easier. She said she was managing.

“I have a scenario for you,” she said. Mia was prone to scenarios. “Imagine we’re both middle-aged. My husband comes home drunk one night and I strangle him with a belt. It’s justified, though. What would you do if I called you instead of the police?”

“He was probably a bad man.”

I understood that this hadn’t been the point of her question.

“I’d tell you to run. Start a new life. If the cops ask, I’d tell them all you said was goodbye—and that it was an odd and confusing phone call in which we both cried.”

“What if I refused? Would you turn me in?”

I thought about a Swedish sitcom I’d seen recently—and that Mia had recommended—in which a couple fell out of love and a woman’s body was dismantled like a chicken’s, thighbones jolted out of their sockets.

“Then I have something else to ask,” she said. “Imagine it’s dark out, and you’re driving down a residential street. You hit a dog. Do you wake the owners up? The dog is dead.”

“But the owners left their dog out at night. Joint carelessness.” I told her that I’d keep driving.

Mia seemed vaguely bothered by my response, but the conversation shifted onto recurring topics. We were laughing as we left Denny’s and approached her car, at which point she gestured for me not to get into the Camry, but to wait behind it.

“Thanks for paying, by the way,” I said. We took turns picking up the tab whenever we ate out. That night hadn’t been her turn, but she’d insisted.

Mia opened the trunk of her car and in it was a dog. The dog was dead.

For a moment, Mia seemed just as wide-eyed and flustered as I was. This was a knee-jerk imitation, however, and once the moment passed, her shoulders relaxed slightly in recollection. The dog in Mia’s trunk was a Yorkie. A long-haired, silver-brown puddle, its tiny body loose and oily. Eventually, Mia met my eyes and a silent acknowledgement passed between us that there was nothing we could possibly do other than to close the trunk and get in the car, so we did.

I caught a glint of metal in the rearview mirror and realized there had been a shovel in the backseat. Mia pulled out of the parking lot. I buckled my seatbelt when she took us onto the highway. I asked her if she was trying to outrun the fog.

Mia said nothing and continued speeding. We sat in silence until I said, “I feel used and unhappy.”

“To be honest, I could’ve done it myself. I needed someone to talk to.”

Mia and I had met in ninth grade. We’d been the only two Asian girls in our assigned homeroom class. My initial impression of her, gathered solely from her pastel shoelaces and a pink-and-white backpack bristling with button pins and key chains, had been wildly inaccurate. By twelfth grade, she’d developed both a tattoo on her upper thigh of a naked woman, limbs interwoven with red snakes, and a small collection of ear cuffs. Her favourite had been a silver pair shaped like Chinese dragons, all fang and eyeball.

By the time she met Pelle at an arcade bar downtown, we’d already graduated high school and enrolled in different programs at the same university. She was in life sciences while I’d opted for liberal arts. By virtue of the boys at our high school having likely interpreted her eyebrows—the way she chose to do them back then—as a warning, Pelle had been Mia’s first real boyfriend.

“I thought I saw Pelle standing on the roof of a house,” Mia said now.

I considered making a joke about whether she should be driving. Pelle had ended his relationship with Mia three months ago. Even so, Mia had a tendency to introduce Pelle—or at least Sweden, and sometimes architecture, because Pelle was Swedish and had been, before he dropped out, studying architecture at the same university as us—into every one of our conversations except that night’s, which I’d mistaken as a sign of recovery. Once, at a Korean restaurant, I’d laughed a little too loudly at my own joke and Mia had said, unsmiling, “That was very Swedish of you. Laughing into the void.”

“You would’ve been better off telling me you were texting.”

“It was just an oak tree. Honest mistake.”

“This is a grave matter,” I joked. It fell flat and I felt worse than before.

Mia took us off the highway, turning twice before reaching the deserted parking lot of what looked like a church, a solitary structure—she directed my attention to its Gothic-inspired arches and flying buttresses—bordered only by expansive lawns, a sad pond, and tree-lined paths disappearing into the fog. Mia told me to open the glove compartment and in it was an unopened bottle of spiced rum.

As Mia swaddled the dog in a bath towel and cradled it in her arms—it had a rhinestone-encrusted collar, a petal of tongue poking out from the baby blue bundle—and as we circled behind the church and down a hill overgrown with white flowers, time felt wispy and speculative, stretching out ahead of us so that it became thinner and thinner until it seemed to vanish entirely. We decided on the base of an elm tree.

“We were just beginning to work things out,” Mia said. And then she wept.

“You deserve better,” I said, rubbing her back in tight, rapid circles. Then I placed both hands around the shovel’s handle. I drove its blade into the earth, which was damp and yielding, and stepped up on its rim.

The truth is, I’d never seen Mia cry before, and witnessing it at that moment had left me feeling oddly useless.

We took turns between digging and drinking—Mia drank much less than I did, mindful as she’d become to the dangers of reckless driving—for what could’ve been twenty minutes or two hours. For willowy intervals of time, the shovel rested abandoned against the tree while Mia recounted Swedish legends. I lay in the wet grass, tucked under a blanket of fog, listening. The only story she told that I can recall—and that I find my mind still settles on every now and then, long after Mia and I went our separate ways—involves the devil in disguise as a fiddler, forcing the boys and girls of a Swedish town called Hårga to dance until they dropped dead.

Other times, one of us would fall into a steady rhythm with the shovel, lulling us both.

I broke one of these spells. We’d dug a hole that was roughly four feet deep. I was standing still. Around us, time seemed to start and stop, start and stop, like a windless breeze.

She said nothing for a time. “I’m not sure,” she said finally.

I don’t know when she said it, whether she was referring to Pelle, or even how much of her was still there—come to think of it, Mia did get pretty drunk at some point—but I heard her say, plainly, “We were supposed to share in this sadness.”

I didn’t understand what it meant. Mia and I each had sadness that we couldn’t get ahead of, like a bloom of soft rot in a firm vegetable, and—in spite of what we meant to each other—our sadnesses occurred in seclusion. Over the years, I’ve thought about why I never told Mia about my parents’ divorce. The actual process was tidier than most—they slept in separate rooms and spoke minimally until my father moved out and into a one-bedroom apartment. There had been no infidelity. Not a single argument, even. I imagine it like this: My mother and father are lying in bed and they have the same thought, which they say at the same time, and the thought is, “I no longer love you,” and it has already happened. The truth is, I thought Mia was overreacting about Pelle.

We buried the dog. Mia suggested leaving a note for its owners, but I said something pointless, something like, “Things that start for no reason end for no reason,” and we dropped the idea. For the entire ride home, Mia fretted about the possibility of cameras having recorded the dog launching its petite, silken-haired body into her front tire, her raising it by one of its legs off the road and into her trunk, and the two of us carrying it behind the church and burying it.

“There are no recordings.”

“There are recordings,” she repeated. “I’m on them. We’re on them.”

“Neither of us are on them,” I said. “And there are no recordings.”

Mia thanked me when she dropped me off. I unbuckled my seat belt and, instead of relief, I felt pain. The next time we ate out was on her, she said. I asked her what she was going to do now. She said she would take the long way home.

My family was still asleep. After a long, hot shower that stung the blisters on my palms, I swaddled myself in colourful bath towels and sat on the side of my bed. I pictured Pelle standing naked on top of a colossal Swedish berry. In the distance, a dog barked. 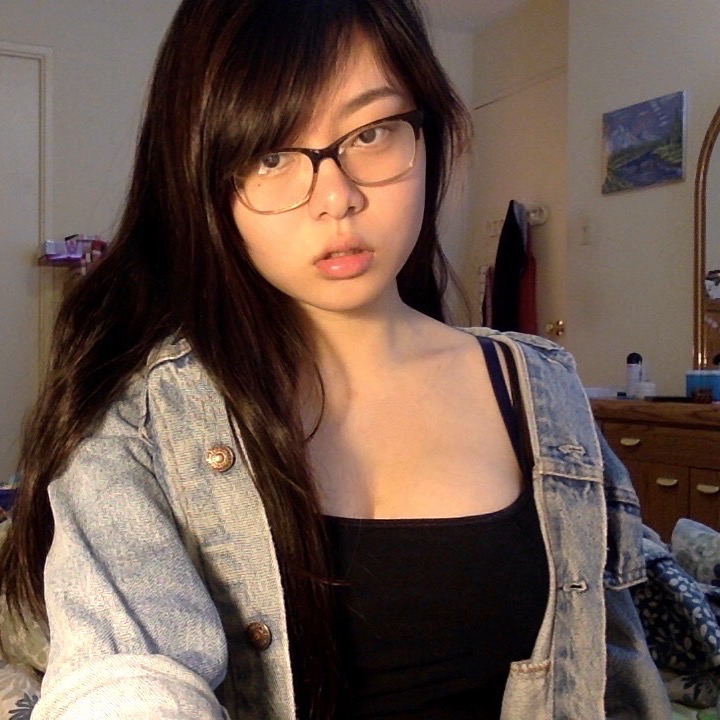 Carolyn Chung lives in Toronto. Her stories have appeared or are forthcoming in FreeFall Magazine, Echolocation, Acta Victoriana, and others.