It was round about the time Winthorpe Power Corp. posted its $500,000 reward that my public spirit kicked in. I didn’t set the blasting caps on the Dyno Nobel Vibrogel that blew up four electrical shacks halting construction for two months on the nuclear plant project at Pettifer Lake. I simply told the police who did it.

While at first blush this might seem a blemish on the vigour of the 800 strong members of the Integrated National Security Enforcement Team, let’s give credit where credit is due. The police solved the crime. Circulated the rambling threat letter that was sent to three local newspapers in the week immediately prior to a highly incompetent series of explosions. Then they put up the pictures of nine possible suspects taken by a closed circuit camera in the post office where the letter was mailed.

The media solved the crime. Published the pictures and the letter and then proceeded to interview every man, woman and three-legged moose within forty miles of Pettifer Lake in a rush to get their scoop: “Mad Bomber on the Loose.”

This intrigued me. I mean, how big can Pettifer Lake be, right?

And you know what I’m capable of. You’ve watched me now for five years turn your blogs upside down with stunning dexterity to get to the truth. For fun I’ve researched all manner of benign questions from standoffish old hens who preach internet safety to pubescent daughters all the while as they leave their own windows open and their pants down around their ankles. “You sick bastard,” you’re saying. I do you for free, imagine what I’d do for five hundred thousand patchoulies.

I always wanted to use that word. I blog at night under a maze of different aliases from a computer in my mother’s basement. By day, I’m an investigator in a bank. I also work for secret service. Theirs, not yours.

Ah! “Crackpot!” you’re saying. CSIS wannabe. We rejected him ten years ago, he sent his application in by mail. Don’t call us, we’ll call you.

You think it’s an accident I post a story in my blog about a hunting mishap the night before they try taking out Dick Cheney in Kabul. A detailed vignette about Cape Cod the weekend Obama’s fishing with his family off Martha’s Vineyard? Thanks by the way for shutting down my server for six hours, and all of Twitter, I needed a break. Do you care that I once spent three months drinking coffee in the lobby of CSIS headquarters in Calgary? Another six riding elevators at the U.S. Consulate. That I rent a bare office space across the street from Winthorpe Power Corporation? Coincidence? I think not. But that’s fodder for conspiracy theorists. I digress.

I started off on the wrong foot, the same way the cops did. Never mind where was Weibo. All this bullshit about “stay away from our homelands” in the threat letter was just a red herring.

Let me be the first to apologize to the Awaukihegan First Nation. And to thank them for setting out their entire family tree on their website. We’re on a first name basis now. Their band began the public protests against development at Pettifer Lake. Set up roadblocks, nearly getting pasted by long haul truckdrivers in the process. Not a tolerant bunch. Still, a largely peaceful demonstration. Police checked out one rammy fellow from their number on an outstanding warrant, but he was clean. The rednecks were wrong. The Indians didn’t do it.

Dead end. So then what? I start reading every article in every newspaper about Winthorpe or the bombing. Globe & Mail, Edmonton Journal, Vancouver Sun. Four years back issues of the CoffeeShop Express. Anything I can find. Then follow up each goofball rant from every loose cannon / anonymous commenter who expressed a grudge against the company, atomic energy or the government. Freaky stuff. Well guess what I learned? Nothing. Except possibly that the Unabomber has no computer. He’s probably a Luddite.

Back to square one, I’m left with a threat letter and a bunch of black and white photos from the post office.

Anyway, a former U.S. President is in town giving a speech, so I’m standing on the street corner with Ewon Kenahso, a big burly Samoan activist, joking with officers in the carnival atmosphere under threat of imminent sniper fire and just when I bet Ewon ten dollars that the black Mercedes Benz with the Bush look-alike waving from behind a bulletproof backseat window will bolt out of the parkade and turn left the wrong way on a one way street to careen down the tramline (I win the bet), it suddenly hits me.

There’s only one bank in Pettifer Lake. It’s a branch of the same bank I work at. So I order up copies of ten cancelled cheques from every account of every single one of the two hundred people that live in Pettifer Lake. Just because I can. You think I’m shitting you?

I compare handwriting. It doesn’t matter if the bomber purposely wrote the threat letter with his opposite hand, you can’t unlearn making a fucked-up “2” like the one on the envelope he sent or the big looping “O’s” that look entirely as though they were scrawled by a five year old kid.

I’m getting down to about the eightieth Pettifer Lake bank customer when I finally hit paydirt. Bingo. There it is. A cheque for $200 from “Mrs. Mary Eileen Morrison.” The figures are identical.

I google image the bitch, and out jumps her fat face and flat hair on Myspace. It’s the same woman in the picture as suspect #9 in the post office photos. Except for a bad auburn dye job. “Nice!” I give a flying fuck if the police now claim all nine suspects have been cleared. We all know who wrote the threat letter. Only one problem though. She couldn’t have planted the bomb. The broad’s in a wheelchair.

Well that might be a disguise. I gotta go check. It’s only 600 miles to Pettifer Lake. I’m always up for a road trip. Now don’t go getting your knickers in a knot ladies, won’t be visiting you anytime soon. Although I’m itching one night to sing karaoke at Duke’s. But I digress.

So I’m sitting on a rural road outside Mary Eileen Morrison’s house in a rusty white Chevy pickup. She owns a charming character home, probably been in the family for three generations, with a wide, wraparound porch that looks out onto a scenic valley. Past her horses, she can see far across pine bluffs to a box canyon and a spectacular view of Old Corcoran Mountain.

At least, it used to be a spectacular view. Just on this side of the bluffs, they’ve begun carving from the hillside an enormous grey eyesore that is slated to become the sprawling sixty-acre Winthorpe nuclear power complex. That’s progress, I guess.

I’m taking all this in when the front porch door swings open and out rolls Mrs. Morrison. But it’s the tall, lean cowboy pushing the wheelchair behind her who grabs my attention. There’s a peculiar earnestness in his pale blue eyes and long silver hair. The couple are both nearly motionless now, staring out in the distance from their porch. I’m so close I can see his big red adam’s apple wobble and the purple veins in his neck start to swell. Over the wind, you can almost hear his shrill voice rising at town hall meetings, complaining about the new overhead powerlines and his wife’s recent dizziness, pleading with suited reps from Winthorpe Power Corporation, “There’s gotta be another way!”

There, there. That’s just plain old nimbyism. They’re totally within their rights, sir. Ask the guy who commutes 15 miles solo to work every morning in a big yellow Hummer, leaving the lights on in all four bathrooms of his 3-story suburban mansion. He ain’t ready yet to hang his clothes out to dry or tend a small vegetable garden in the backyard. And four children is a nice round number for a family.

We need energy to get our energy out of the ground. We can sell what’s left over to California, who’ll write us IOU’s they renege on. Not to mention we’re the only province who can afford a nuclear power plant now. Don’t worry about trillion dollar cost overruns or the eternal vigilance of maintaining a dismantled facility. Here’s to cancer, four-eyed fish and vast tracts of permanently unuseable wasteland the size of Kansas.

Nuclear power is nothing more than a collective admission we made a big mistake. But I digress.

So yeah, there’s an odds on chance that old man Morrison did it. Now I’ve been sitting quietly for 18 months. What are the police waiting for? A signed confession? The Youtube video? I’ve got half a mind to go arrest him myself. You can’t just go around blowing up nuclear power plants.

As for the reward, I’m not holding my breath. Winthorpe lawyers have weasel-worded the contract so bad they won’t have to pay a dime. Police might say I jeopardized the whole investigation by breaking the story. But who knows, maybe it’ll drum up some chatter. At least as much as their own clandestine efforts, detonating two matching porta-potties within a week and a mile of each other this summer. As if the original bomber would be that stupid.

Flash forward to the front steps of the Winthorpe Power Corporation Building and me tearing up a cheque for $20,000 in front of the T.V. cameras. That’s the thanks I get from Winthorpe Power Corp, for speaking up against violent, bomb-wielding terrorists? But we don’t do this for the money, do we girls? It’s enough that my mother knows I cracked the case.

Maybe one day, when old man Morrison finally gets out of jail, he’ll look me up and we’ll get a chance to sit down and chat about what happened up at Pettifer Lake. Hopefully over a beer. I’ll probably be buying. 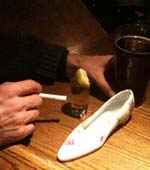 Stories by Nelson Eshleman have most recently appeared or are forthcoming in Flash Me Magazine, Canopic Jar and the Potomac Review. He lives in Calgary, Alberta. This is his first published piece in Canada.