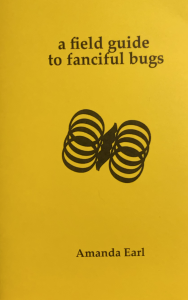 A field guide of fanciful bugs

Originally published as an ebook in 2010,a field guide to fanciful bugsis the ninth chapbook ofAmanda Earl’s visual poetry from Ottawa’s above/ground Press. The fanciful bugs in question here are several visual poems made up of single letters or small words. A group of M’s are arranged cleverly, labeled as “The Gnasher.” Several V’s make up“the vampire mosquito.” It’s a playful idea-and indeed, ‘whimsy’ is one of Earl’s stated goals in her bio. But the relationships between letter form, image, poem, and name are rocky and inconsistent, prompting unease. A group of V’s are “the snow bugs,” while later an arrangement of the name ‘Max’ is “the small butterflies of Max Ernst.” The central idea of these visual poems is revealed at the end of the chapbook, but rather than building out a logic to justify it,it feels like a sudden gear shift toward the end.On her website, Earl notes that she has grapheme synaesthesia, where in colour and text often blend together in her perception. Considered through this lens, things make a little more sense,with the folding text and interplay of shapes likely looking significantly different to those who experience this. In this sense,a field guide to fanciful bugs serves as a strong example of synaesthesic art at work. I only wish I’d been able to enter the experience abit more.