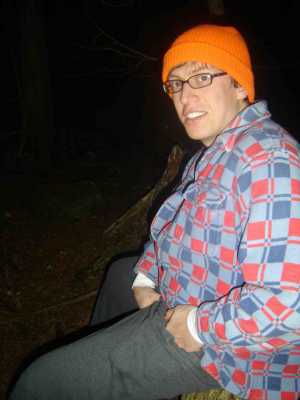 A Month of Zinesters: Everybody Moon Jump Next up, we asked Dave Cave of the zine Everybody Moon Jump why he creates his hiliarious, confessional, cut-and-paste zines.

Based in:  Cambray, Ontario

Website: Cave is also prolifiic blogger, detailing the most minute details of his day down to the the vegetables he’s planted, the TV show he’s watching at that moment (with photos from the couch) and the food he’s about to put in his mouth. We don’t accept this level of sharing from everyone, but Cave makes it work. http://everybodymoonjump.blogspot.com

“I make zines because I’m a self-absorbed egomaniac and have a compulsion to broadcast my life secrets.  I want people to talk about me and biggest fear (tapeworms aside), is being on my death bed thinking, “Dammit I never got famous.”  I have no interest in “fostering a community” or “the scene”.  It’s a perzine, not a you-zine.  Also I need to do something with my pile of medical text books from the 1960s.”

Note: Dave Cave apologizes for his picture: he doesn’t own one without him holding his “junk,” like a young Michael Jackson.