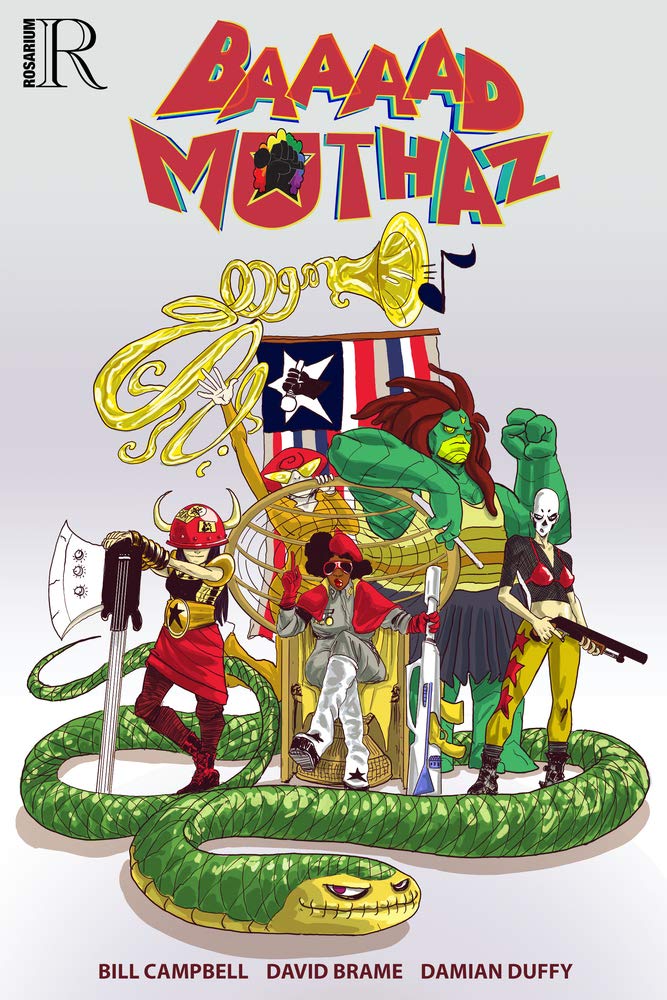 “You gotta end the show on a high note.” It’s a truism, and one that any musician worth their salt could tell you — in this case, it’s Afro Desia, frontwoman of the Baaaad Muthaz. She and her crew are not only the galaxy’s most fearsome space pirates, they’re its funkiest James Brown cover band, to boot! Writer Bill Campbell and artist David Brame certainly start their series off with a bang: a clandestine exchange gone awry allows a fleeting glimpse into Captain Desia’s past as a surgically enhanced activist wunderkind — it certainly makes for scintillating reading. Unfortunately, the series seems to lose steam over the course of the collected six issues, which may find some readers sneaking out before the encore.

At its best, Baaaad Muthaz is a vivid mashup of sci-fi tropes and retro Blaxploitation flair, with a dash of revolutionary politics thrown into the mix; the art is kinetic and lushly coloured, reminiscent of Paul Pope on a Jimi Hendrix album cover. From the first issue, Campbell and Brame set themselves up with plenty of material to draw on, but manage to keep it balanced, teasing out backstories and subplots little by little.

Halfway through the six-issue run, though, that balance seems to collapse, with new characters showing up out of nowhere, and conflicts and motivations changing at a moment’s notice, making the story difficult to follow.

Brame’s art also starts to look rushed: the careful linework and detailed backgrounds of the first issue seem blunted by the end — even the throwback ’70s colour palette seems to take a back- seat by the final panels.

Readers craving something off of comics’ well-beaten path will likely enjoy the way the series plays with expectations, and fans of funk and soul music will appreciate the plethora of references in Campbell’s script. Regardless, readers will want to keep an eye out for further adventures of Afro Desia and her crew — with such a rich cast and story to work with, I doubt we’ve heard the last of the Baaaad Muthaz.