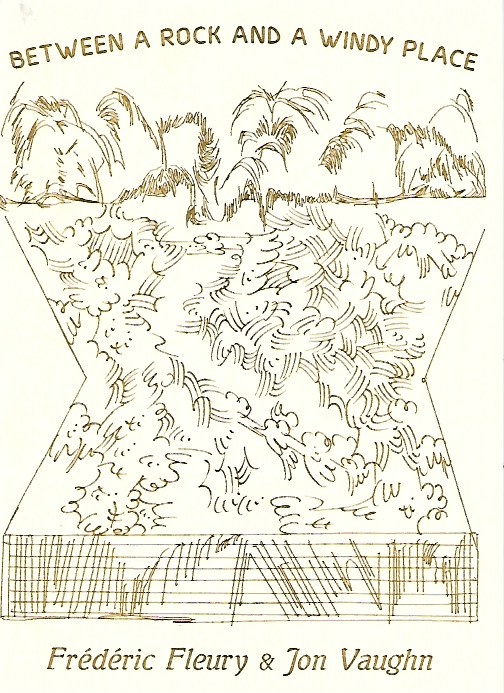 Between A Rock and a Windy Place

I was first introduced to Frederic Fleury’s work because of a public spat he had with alt comix figure Johnny Ryan nearly a decade ago. In some ways, one ought to be surprised by Fleury’s collaborative zine with Jon Vaughn, an experimental cartoonist and book artist based in Saskatchewan. Those who have kept their eye on Fleury would remind you that a whole lot can change in eight or nine years.

Vaughn and Fleury’s styles complement each other impeccably in Between a Rock. Freeform illustrations fall into each other, playfully getting lost. Often, the thickness of the lines used is the only distinguishing trait between the two artists. Like Vaughn’s Sand Masque (also reviewed in this issue), the images here ask to be explored. Messy, wild, and windy environments invite you in, jumbling together into fun and mystery. The titular wind blows through, tossing things to and fro and masking where Vaughn’s lines end and where Fleury’s begin. For my money, this is basically an ideal collaboration: two art styles that pull up and strengthen each other, working in harmony towards a goal. The artists tear far beyond that goal, and liberate each other from the burden of authorship, if only for a moment.