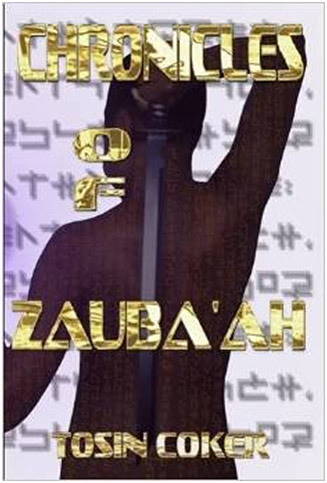 Chronicles of Zauba’ah contains the epic Afro-futuristic sci-fi tale of Zauba’ah, a female shetznu: that is, “a humanoid…with typically amber to red eyes” and “elliptically shaped pupils” that can transform into different creatures from the planet Qheltari. The book is a prequel to Tosin Coker’s Afrofuturistic quadrilogy of books, and in it Zauba’ah goes through many transformations of name, body and spirit after she defends a male Qheltarian, eventually named Savant, and decides to join in life companionship with him. However, after the ritual of each getting marked with companion bands, the two are quickly visited by Savant’s future self, named Imhotep, who warns them that they are forbidden from consummating their union as Savant is destined to step aside for a great warrior. The predicament propels both toward their shared grand destiny and entrance into an immortal intergalactic elite who journey on “The Path” to N9nth degree status.

The book’s many explorations of gender are really subversive and interesting as well, such as the Qheltari females who “literally bring forth children as an act of love through their hearts” and believe that “as the males of their species could not give birth, they had no right to kill without being granted the permission of a Qhel-Tenshar female.” There are also genderless and transgender beings that exist as many “across the galaxies” with the pronoun “sei” and the single gender planet, Gentra with “psychometric females” who only marry those of their same gender.

At over 400 pages, the book goes into many tangents, however, many of the characters fail to receive a satisfying story arc. While the many typos and grammatical errors, which are acknowledged which is acknowledged by Coker in the book’s introduction, are distracting, it was amazing to read about an Afrofuture where Black people serve as the inspiration for many different species across the multiverse. (Fiona Raye Clarke)