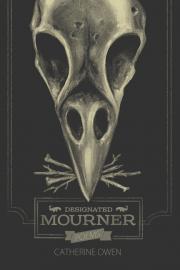 In her latest collection, Vancouver poet and musician Catherine Owen engages with spousal grief after she lost her partner to addiction. This is Owen’s ninth book of poetry, following Trobaritz (Anvil Press, 2012, reviewed in BP issue 60).

Grief is a challenging subject at the best of times, but Owen manages to deftly sidestep the temptations to idealize or to wallow. Presented utterly without irony, these poems are tender and sweet, yet never become cloying. From the final lines of “Three Ghazals for Grief”: “The last song we wrote together silenced / and the score for it buried within you.” Throughout intimate moments – simple meals, lower back kisses, a gesture when falling – are brilliantly captured.

The sensuality and physicality of her lover’s body becomes almost tangible as she reconstructs its after effects: running a hand along the sutures, the texture of cremains, and all that came before. She is haunted by ghosts of her own creation, and notes that even atheists take comfort in the idea of reincarnation. “Where are you, I keep asking as if I believed death / has a location and, if I ask often enough, the map / of your voice will sound its reassuring X” (from “Directions to the Lost).

Scenes are revisited from various angles, and there is a churning repetition of phrases as if each iteration seeks a new way through to meaning. Designated Mourner is raw emotion beautifully wrought, and I wept openly as I read. (Nico Mara-McKay)