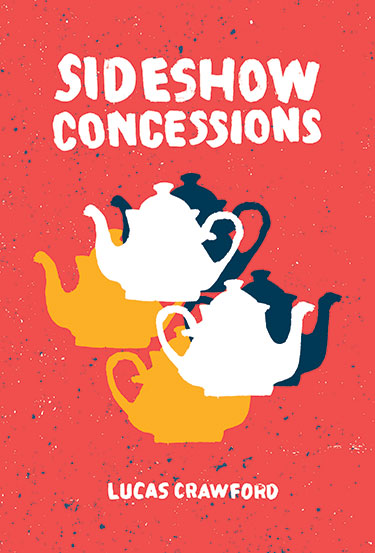 Lucas Crawford includes a list of imaginary Canadian Literature Premises late in this collection, running the gamut between “The Affair I Considered Having Once” to “Roughing It in the Bush: An Anti-Colonial Lesbian Rewrite.” The hidden punchline in this spoof-list is the hypothetical title, “I Bear Some Resemblance . . . to Rita MacNeil, So Perhaps Someone Would Like to Read About My Vicarious Identifications With Her” — a poem which actually appears earlier in Sideshow Confessions as “Failed Seances for Rita MacNeil (1944–2013).”

Unabashedly including his own work on his hyper-Canadiana spoof-list (one of the highlights of Sideshow Confessions), Crawford recognizes his own role as the narrator of a story we’ve already read before — one that we perhaps risk growing numb to reading: the story of the outcast, in this case an overweight trans person, navigating hostile social waters. But it is precisely Crawford’s awareness of this position which sets Sideshow Confessions apart from the crowd. It not only allows him to subvert his societal role, but side-steps a major pitfall — Crawford’s biographical idiosyncrasies, while playing a major role in his poetry, never displace his sense of identity or narrative voice.

Sideshow Confessions is an accessible glimpse at the absurd — a clever look at a trans narrative which explores its challenges without drowning in them. For this reason, I can happily recommend it. Invisible Publishing has printed a snappy, good looking product, and Crawford’s sense of humour is a breath of fresh air. (Joel W. Vaughan)