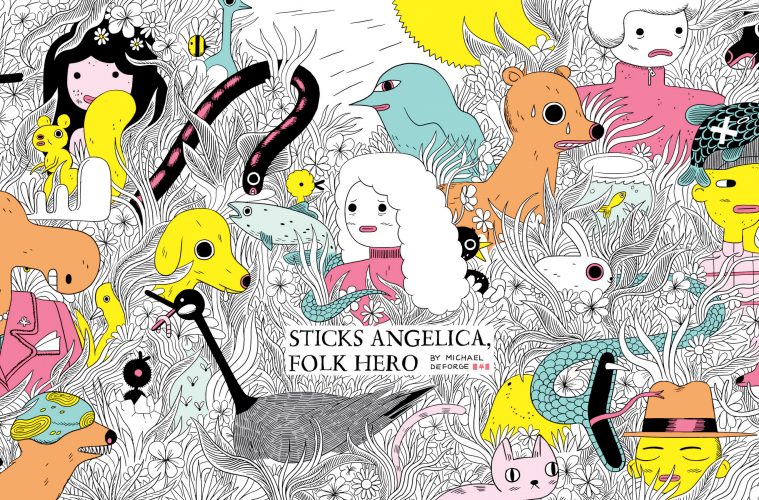 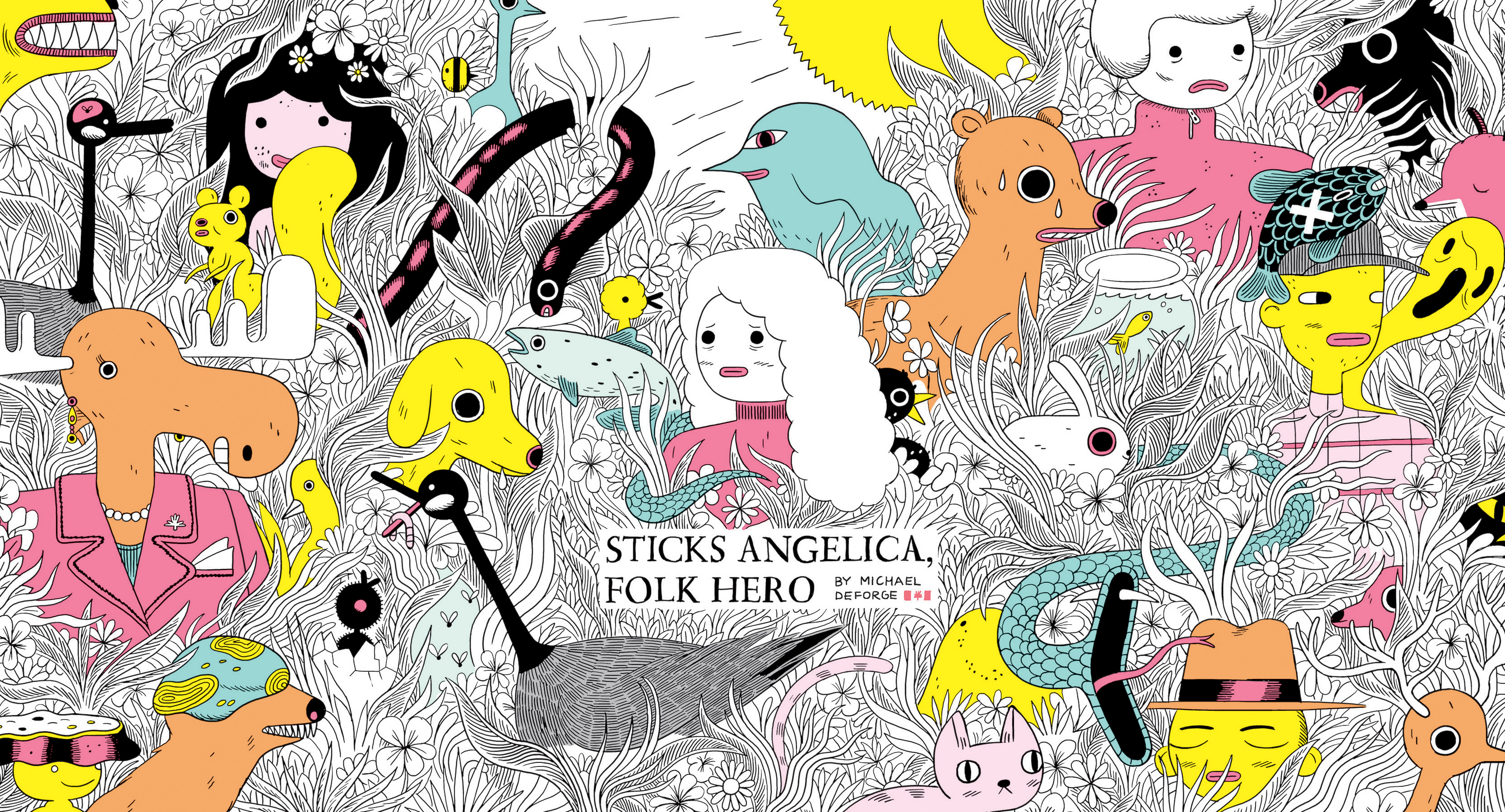 The more I chat about comics in different cities and contexts, the more I realize just how massive Michael DeForge’s influence is not just in Toronto, but the world over. He is hero to creators and readers from a wide range of backgrounds, ages, and locations. Longtime fans and first time readers find themselves equally entranced by the poetic, postmodern situations and dialogues that inform the universe he’s built, always one degree from reality, and his bizarre and spacious illustrations. And he is also prolific — starting with his Lose series in 2009, DeForge’s continuous stream of releases, whether self published or with Koyama Press and Drawn & Quarterly, has allowed him to create a whole world that pushes the aesthetic vanguard of indie comics today.

One of the many steady trickles of DeForge’s work was his serial webcomic strip from 2015, Sticks Angelica, Folk Hero, compiled in this recent edition from Drawn & Quarterly. The titular hero is a self-described “Former: Olympian, poet, scholar, sculptor, minister, activist, Governor General, entrepreneur, line cook, head mistress, Mountie, columnist, libertarian, cellist.” We meet this self-aggrandizing, privilege-proud maverick after she has fled her high-powered Ottawa life to live in the fictionalized Monterey National Park. The self-appointed leader of the woodlands, Sticks spends much of her time humble-bragging, hurling advice and abuse at the animal community, and leading on her not-so-secret admirer and best companion, a rabbit named Oatmeal. When an unspeaking feral girl begins appearing in the woods and shifting its gentle balance, Sticks is called upon to act.

As with all of the settings in DeForge’s worlds, there are strange and arbitrary rules and shared understandings, such as the practice of marking some animals for death as punishment while protecting the others from being hunted, and the inherent gossipy and romantic characteristics of the geese. The specificity of these things always makes DeForge’s books feel strangely close to reality, thorough but inexplicable. And of course, the fact the Michael DeForge himself is a character (and comics peer Lisa Hanawalt’s name is inhabited by a lawyer moose), of course, adds to this strange familiarity.

I wondered how the format of a serialized comic would fit DeForge’s work, especially to read it all in one go as I did. The story arcs are a slow burn, but there is a cohesive narrative, conflict, and character development you would expect from another comic, just with a bit choppier pacing. The pink and white colour scheme is easy on the eye, and I just wish that wide, strip-style comics were kinder on the binding of books (nobody’s fault but physics, I guess).

Yet another silly, strange, and evocative addition to DeForge’s oeuvre. Get into it. (Jonathan Valelly)