The lineup was out the door when I arrived at the second annual Brooklyn Zine Fest last Saturday. When the bouncer explained that he didn’t know how long the wait was, more than one zinester remarked with surprise — and glee — at how popular the event was, possibly aided by a New York Times article reassuring the public that “Yes, Zines Exist, and They’re Not Just Antiques.” The Times is on it!

Twenty minutes later and inside Williamsburg’s Public Assembly, there was ever more evidence that the zine community of New York, and even farther afield, is alive and well. Organizers estimated that more than 2,000 peopl 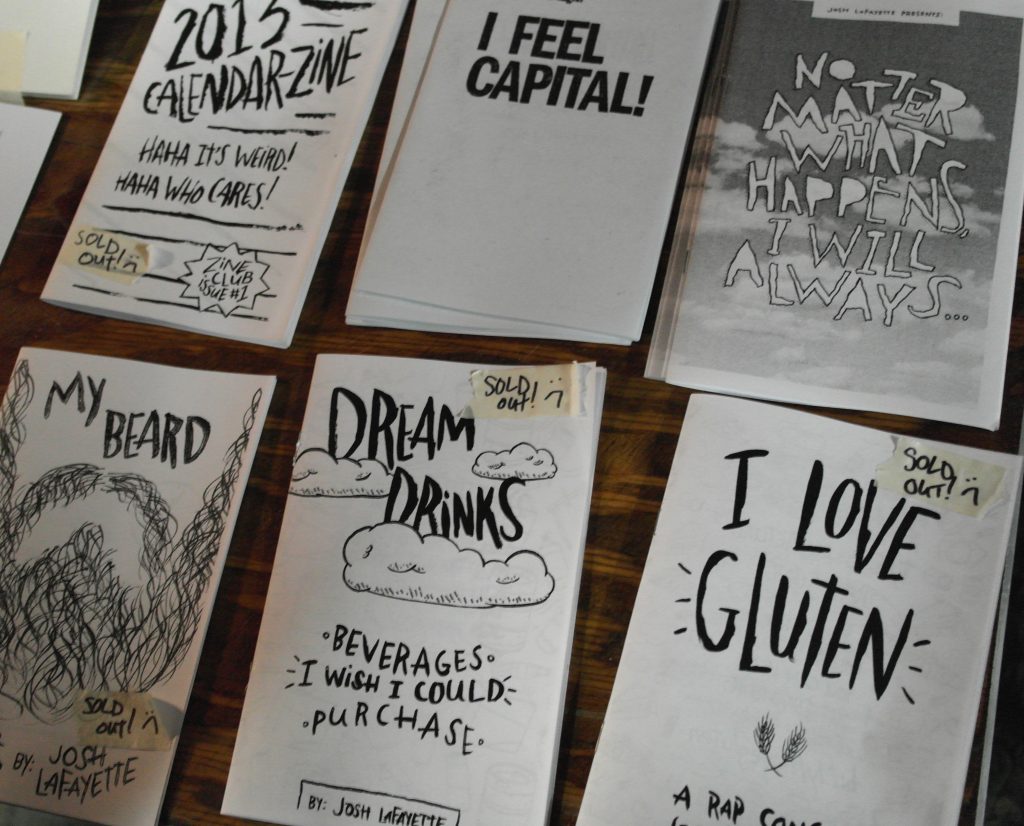 e attended over the day. Pathways between vendors’ tables were packed with fans balancing PBR cans and stacks of zines, comics, chapbooks, T-shirts and prints. Josh Lafayette had a lot of sold-out stickers on his collection of zines which include Dream Drinks: Beverages I Wish I Could Purchase and the topical I Love Gluten. Lafayette started a zine club late last year, where for $40 subscribers get first dibs on his monthly zine, complete with a club seal hand-printed on the back.

Up on one of the stages, Dre Grigoropol was selling her own comics as well as Zine Crush: Confessions of Like, featuring a comic of her own zine crush Sarah Rose, a zinester who also organizes the Philly Zine Fest and Feminist Zine Fest. The collection includes some short, Craigslist Missed Connections-style notes dropped in a box at the Richmond Zine Fest in October.

The admissions range from sweet — “Safiya Bridgewater is so passionate, funny, creative and all around sass-tacular”— to… frank: “Your ass is killer with your jeans with the bright red flowers embroidered on.” My favourite entry was Octavia Guerra’s story about an unnamed “zinestress.” Guerra writes she was afraid to read the perzine of her crush, in case she didn’t like it and couldn’t lie about it, but ultimately the story is about how zines connect people: “…having a zine crush on someone who writes such a lovely perzine means I can pick up her zine whenever I want and connect with her through the page, in quiet moments, intimately. And that’s enough.”

Another zine about zines, Finite + Flammable, edited by Joe Pompeo and Jessanne Collins, collects memories about making zines (or not, as with a “Lifestyle Magazine for You And Your Much Older Boyfriend” that never

happened), and the friendships, issues, anxieties and obsessions that drove them. Pompeo and Collins were also giving out free back-issues of zines (with purchase). I picked up the 2002 sex issue of the now-defunct “clamor” magazine, as well as two copies of “Obscure,” media journalist Jim Romenesko’s early 90’s zine.

On my way out, after stopping by zine legend Ayun Halliday’s booth and complimenting her on the nifty headband floating the word ZINES above her head in bright yellow, a man with wild gray hair told me how much fun he’d just had Zine Fest and showed me a button for Deafula, a zine written by a woman named Kerri who’s deaf. The man told me his own wife was going deaf, and finding a zine and this button for her made his day. “How awesome is this?” he says as he left.