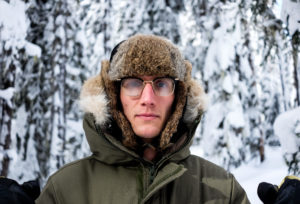 1. What inspired you to write your newest book, I Am Herod?

When I first heard that one of the world’s largest religious plays took place in Alberta’s badlands (and had been taking place there for over twenty uninterrupted years), I was shocked. I grew up in Calgary, ninety minutes southwest of the badlands, but I had never heard of the play. I was taken aback by how religious and non-religious people seem to live in separate worlds; something that is the centre of one universe doesn’t ever blip the radar of the other.

Having gone through Catholic school but having long fallen away from faith, I felt that I was in a unique position to write about the play as both an insider and outsider. I decided to perform in the play in order to give myself the best shot of capturing its full scope: the spectacle, the defects, the stalwart camaraderie, the Soviet-level infighting.

At least, that’s what I’ve been telling myself. But now that the book is written and edited, proofed and printed, I am beginning to think that this was all an elaborate ruse I have played on myself to force me to answer the question, Does God exist?

2. You write poetry books, lengthy non-fiction, and short stories…what style of writing do you enjoy the most? Is there a reason you don’t stick to one genre?

My goal (or I should say, blind hope) of writing in multiple genres is that doing so will make me a more proficient writer overall. I’ve never really bought into the idea that a writer must be a fiction writer or a nonfiction writer or, Christ have mercy, a poet. Rather, doesn’t it make more sense to learn the advantages of each genre and then substitute them in when needed?

In that sense, it’s kind of like being a hockey player (except without, of course, the money, fame, and general cultural acceptance). Each player has individual strengths, strengths which lend themselves to certain positions; but when the opportunity presents itself to branch beyond that position, nobody is going to say, ‘This is outside the strict yet arbitrary parameters of where I stand during the face-off.’ (Yes, in this metaphor, the position of goalie does not apply. But goalies don’t so much play the game of hockey as have the game of hockey played upon them, so I think the overall idea still works). 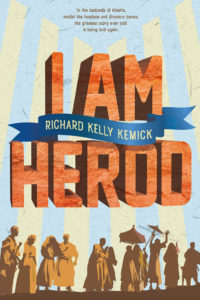 3. What piece of work are you most proud of? Do you intend to showcase it at Canzine Vancouver?

If you listen carefully, you can hear my publicists screaming, ‘Say this one.’

And yes, I suppose that is true; the piece of writing that I am most proud of is I Am Herod, the book that I am showcasing at Canzine Vancouver. But the reason that I am proud of it is more pedestrian than artistic: I Am Herod is the longest piece I have ever written. Before it, I never had enough faith in myself as a writer to embark on such a lengthy, single-topic project. I was always worried that I would spend months and years on a book that was doomed from the get-go. And as someone whose greatest fear is — how do I say this? — not the act of dying but rather the state of being dead and no longer having any time, I was petrified by the thought of wasting all those hours upon hours labouring on something that would never see daylight. I am currently starting a new book-length project, and this fear still exists but I think I’m dealing with it a bit better — that I am the one who decides when a project has failed, not the other way around.

Now, I haven’t actually adopted this zen-like, kumbaya, live-and-let-die attitude. I still fall into the vanity trap of imagining the cover of a book before I’ve even written a goddamn word. But I feel like I Am Herod has taught me, in part, what my outlook should be, of just focusing on the work, chipping away, and even when I don’t know the way out, of having enough faith that I’ll eventually hit daylight.

4. Why did you decide to join Canzine Vancouver? Is this your first time participating?

My publisher, Goose Lane Editions, suggested I attend Canzine because of how fun and successful it has been in the past. I used to live in Vancouver and concurred. I relish any opportunity to talk to readers and writers. This will be my first time participating.