This year Canzine will feature a board game where the players are house cats, a video game called Lesbian Spider Queens and Anna Anthropy! Broken Pencil columnist, skot deeming, writes about the DIY Games Room he curated for this year’s Canzine. 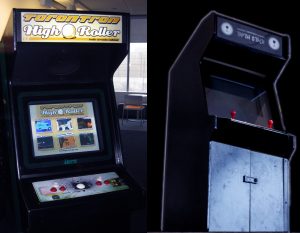 For several years now, I’ve been Broken Pencil‘s DIY tech columnist. Much of what I’ve been writing about in my Error State column are the intersections between DIY (hacker) and gamer cultures. So when BP’s editor and I began a discussion about Canzine, we figured it was about time we brought some of the work that I had been talking about to show off the work of local game makers in an environment where people can sit, play and chat with game creators.

One of DIY gaming’s most luminous figures will be there in person to meet players, sign copies of her book and watch people play her games. 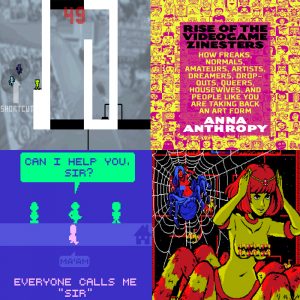 Anna Anthropy will be selling copies of Rise of the Videogame Zinesters and signing them! To celebrate her attendance, we will be featuring a few of her games for you to play: Keep Me Occupied, Dys4ia and Lesbian Spider Queens.  A big thanks goes out to Toronto’s feminist game making collective Dames Making Games, as well as Bento Miso and Digifest for sharing Anna with us. Anna will be Teaching a workshop at Bento Miso on October 19th, and speaking on a panel at Digfest on Oct 20th. This is a great chance to meet one of DIY games’ greatest champion. Rise of the VideoGame ZInester is a fantastic book that charts the history of contemporary DIY games and their makers, while featuring a wealth of information on those interested in making their own games.

In addition to Anna, we’ve got a great deal of other games coming in! Toronto’s Game Culture Non-Profit, the Hand Eye Society will be loaning us two of their handmade Indie game cabinets: The High Roller and the Twin Stick. Each cabinet has a half dozen games by local game maker, harkening back to our arcade pasts with vintage style roller ball and twin stick controls! Both are free to play!!

On the digital side we’ve got a few more game makers rounding out the programme.

Toronto’s Asteroid Base (Jamie Tucker and Matt Hammill) will be showcasing their game Lovers in a Dangerous Space Time. Originally made for the 2012 Global Game Jam,  it’s a two-player co-op micro-platformer set inside a pink Death Star locked in battle with hordes of space baddies. Players work together running back and forth between ship control rooms, manning turrets, lasers, shields and thrusters to rack up points and stave off a vacuumy demise.

And finally on the digital side of things, we’ve got the work of one of my favorite Toronto game makers, Damian Sommer.  Damian’s work often defies genre as he plays with game mechanics and our expectations. For the game room, he’ll be bringing three of his games:

We also have many indie board games:

Eric Avery will be bringing his game Catastrophe! This is a board game where each player takes on the role of a house cat. The human has left for work and won’t be back for eight hours. It’s time to cause as much trouble as possible! Each cat must race through various rooms of the house and ruin as many objects as possible to earn points and the title of top cat!

Halifax’s Grow Giant Games will be sending us a copy of their storytelling card game SkullDugger, where the players break into buildings, defeat traps using special Gear cards, then steal Loot. Players describe their clever plans, exactly how they use their equipment to get past the traps, to the the other players, and they then vote to determine the success or failure of the plan. A few lucky players will draw a blank wild card which they can use to create any item they wish.

Toronto’s Christopher Chung will be bringing his card game Tribal Clash. Fantasy elements are strewn into this game as you control Swordsmen, Archers, and Mages from various Clans and use strategy and luck to defeat your opponents! With three determinants of combat, it’s not so easy to win as you must utilize the cards effectively and read your opponents’ strategies to amass seven cards in your Dungeon; the one with the most points after all combat has concluded is determined the winner!

And lastly, I will be bringing an updated version of We Are Legion, the co-op board game where you play as Anonymous hacking corporate servers and making information free again! We Are Legion was made by me and Alison Pattern for the 2012 Toronto Board Game Jam and took home the Best of the Jam grand prize. We’re currently labouring to get a final version out which will be available for free online in the near future.