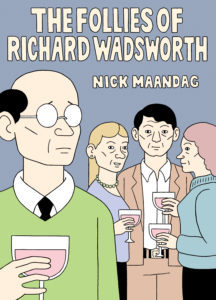 After achieving cult acclaim through his self-published and micro-published comics, The Follies of Richard Wadsworth is Maandag’s debut book. His mechanical, affectless characters and economical artwork efficiently deliver cringes, heightening the awkward silence and stillness of his hilarious comics. In Maandag’s hands—hands that love to toy with morally ambiguous characters and flirt with absurdity—troubled men make poor decisions, unlikable characters gain our sympathies through their very haplessness, and laughs ensue, riotously (From Drawn & Quarterly).

We chatted with Maandag to learn more about where he’s been and where he’s going.

We found a short doc on blogTO from 2006 where you say, “I’m not gonna be optimistic enough to say that I’m going to have my own series with Drawn and Quarterly or something like that”, and now here you are! Can you tell us a bit about your journey?

That’s a little embarrassing. It proves that I’m often overly pessimistic. Although, I think that even back then I thought more highly of myself than I let on. I always believed I had some sort of talent. And I received enough encouragement along the way to keep working at it. My first break, as it were, was in 2011 when I got a Xeric (self-publishing) grant for a comic called Streakers. After that, I was fortunate enough to put out a couple books with Pigeon Press, which really helped increase my exposure. And now I have a book out with D&Q, which is amazing of course. The only way it could get better is if I started earning enough money from my comics to quit my day job, but that won’t happen. Wait, am I being overly pessimistic again? No, no I’m not.
You’ve been a TCAF regular for many years where you’ve earned quite the following. We’re sorry, but we have to ask: do you have any advice for up-and-comers?
My advice would be to just do the work. If you’re just starting out, it will likely take years before you start to see results. Patience is required. That’s why you have to enjoy it. Also, don’t worry too much about being original, or “finding your voice.” That stuff has a tendency to work itself out naturally. Just make lots of comics and each one will be a bit better than the last.
Having studied philosophy, it seems fitting that your comics are full of moral ambiguity and absurdity. Are you inspired by any thinker in particular?
I wouldn’t say that there’s a thinker who’s had a direct impact on my comics. There’s an obvious connection to philosophy in the title story of the new book, which has a philosophy prof as the protagonist, but I would say that my approach to writing is more intuitive than intellectual. I’m not really trying to communicate the type of concrete ideas you find in philosophy. On the other hand, it must be the case that my education had some sort of impact on my work, but it’s hard to say how much. My favourite philosopher in school was probably Plato. Most of the major ideas in western philosophy are found right from the beginning in Plato. And his Socratic dialogues are enjoyable to read, unlike a lot of academic philosophy, which can be dry and tedious. I’ve actually barely read a word of philosophy since graduating back in 2005 (I figured four years of my life devoted to one discipline was enough). Since then I’ve been more interested in fiction than non fiction. I’ve taken inspiration not so much from intellectuals but from artists and comedians, of which there are too many to name.
What’s on your mind these days? What’s next for Nick Maandag?
Make more comics! I’m already at work on the next book. I find I’m not able to take much of a break between projects. I start to feel a bit useless. The next book will be another short story collection, and will be even more absurd. I’m finding myself inspired by the type of zany, nonsensical humour found in Monty Python and The Marx Brothers. I’m going more in that direction.

Nick Maandag was born in Mississauga, Ontario in 1982. He studied philosophy at Erindale College before moving to Toronto in 2006. His previous comics include Streakers, The Libertarian, and Facility Integrity. He has received nominations for both the Doug Wright and Joe Shuster awards.

If you’re in Toronto, join Nick to launch The Follies of Richard Wadsworth on Friday June 14th at The Beguiling (319 College St). The evening will begin with a presentation of Nick’s comics, followed by a conversation with Chester Brown!