This End of the World: Notes to Robert Kroetsch 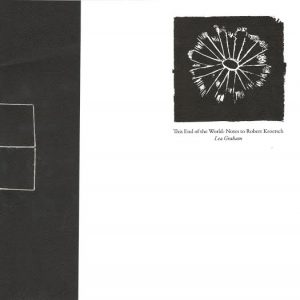 This beautiful, limited-edition and hand-stitched chapbook of poems and short prose entries is a homage to the recently deceased poet and Canadian literati, Robert Kroetsch. While Lea Graham clearly has a strong voice of her own – a lyrical, yet narrative-style accumulation of images lightly salted with popular references – she is also consistently in dialogue with Kroetsch’s oeuvre. She quotes lines of his writing as epigraphs; she alludes to her own reading process of his books; addresses an epistolary poem directly to him, “Bob,” and signs off: “Yours, LG.”

This End of the World verges on obsessive. One of many examples, Graham recalls: “For a few months now I have been writing you as if you sit still at your desk in Heisler, your ear pressed to prairie.” “Writing you” can, of course, be a manner of speaking, an elision of the preposition intended as “writing to you.” Yet the phrase can also be taken at face value: Graham is writing Kroetsch; she is transubstantiating her words as his or appropriating his words as hers. She inserts quotes so that “You [Kroetsch] might say: Love is an absence of middles. You might say: Loneliness is a fire.” If it is a conversation, it is one scripted by Graham alone. If it is a eulogy, it is a colonizing tribute; Kroetsch follows her as she travels to Haiti and France, he comforts her at the death of a former student, he is the fallback reference for every line she writes.

Two strong writers inhabit one slim volume. With such limited space, a cordial cohabitation tilts evermore toward the question, “How do I exist with a book that goes on like this?” (Klara du Plessis)