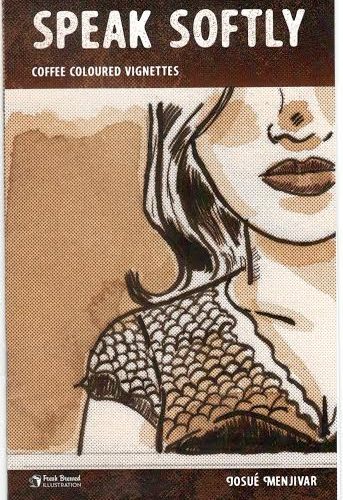 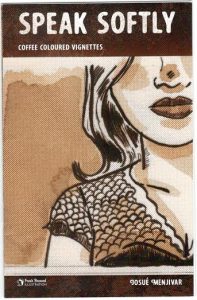 Disclaimer: this review, like its subject, owes all mention of productivity to caffeine. Speak Softly: Coffee Coloured Vignettes leaves little open to interpretation. The title is clear; expectations are set.

Maybe it’s because I’m used to reading zines that are haphazard, wild and off-the-cuff when it comes to creative direction, but Speak Softly feels a little rigid with process championing perspective. At the back of the zine, there’s a small blurb that reveals how the issue was made: “I couldn’t sleep so I got up at 3:35am and wrote all ten installments in one shot.” That’s a relatable predicament, no doubt. But what’s a vignette for if it can’t speak for itself? Not to say that Speak Softly’s vignettes are weak — I think they stand up by themselves pretty well — but they’re housed by a slight lack of confidence.

That said, the illustrations offer vivid impressions of minute and temporary realities, boiled down into a superbly-spilled cup of coffee. Picture a film noir storyboard, but in several shades of brown. And the captions are poignant enough: “I’ve often willed / For a chance encounter / Where we bump in the street. / I fear you already forgot what I look like.” Short and sweet, bitter and vulnerable; sounds like a good cup of coffee. Overall, Speak Softly is tightly wound, but not a disappointment. (Jeff Low)