Deathmatch Finalists: The Origin of the World by John Wu 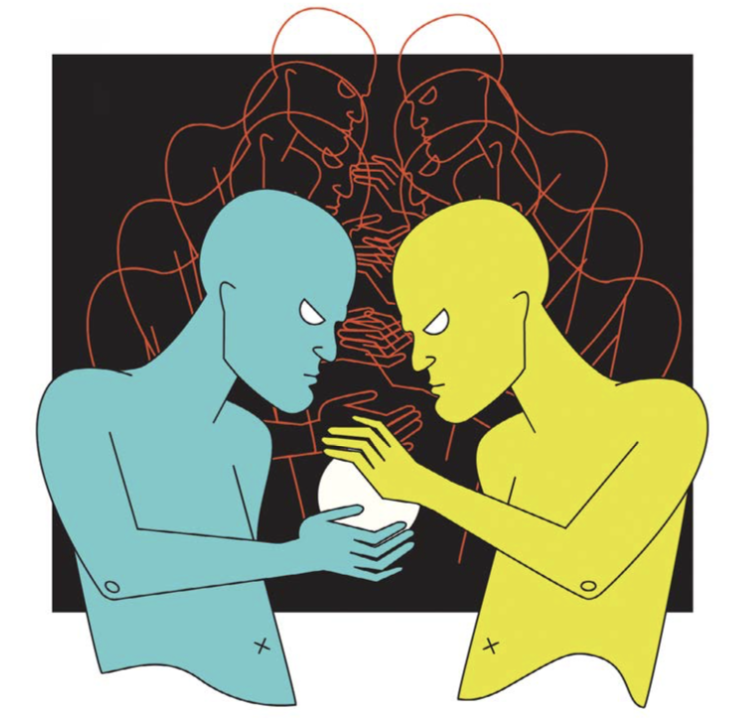 On a cold starless night, dyed red by the glow of the hunter’s moon, the winds whisper through the prairie grass, heralding the coming winter. While the adults of the tribe are out hunting, an old woman and her two grandsons sit at camp, huddling around a meagre bonfire for warmth.

“Grandmother, where does the world come from?”

“What a strange question. Why do you ask, child?”

“Well, everything comes from something. I came from mother. She came from you. So then where did the world come from?” the younger boy asks, scrunching up his face.

The old woman smiles, causing wrinkles to form across her leathery skin. “Shall I tell you all the story of how our world was created?”

Both boys nod eagerly, shuffling in close to their grandmother. The elder’s stories are always welcome.

In the beginning, there was Kawa’anitou, the All-Father, the First of the Spirits. And he had two sons: Akecheta, the bold and resolute, and Oniba, the wary and thoughtful. Together, they created the cosmos.

Now this was a very different world from the one we live in. It was a formless, empty world. So to fill this world with movement, the three of them created the ageni.”

“The ageni were beings made of pure light, and the greatest of their creations. They had been infused with the very essence of Kawa’anitou. His divine children.

“Now, for a while, everything was peaceful. The ageni lived happily in the world that had been made for them. But eventually, Akecheta grew weary. He thought the ageni were meant for more. And so he approached the All-Father, and asked that the ageni be elevated, and made into creators, in their own right.”

“Doesn’t it?” the grandmother says with a wry smile. “But Oniba disagreed. He thought that it would be foolish to ascend the ageni, that it would make them proud and rebellious. And so, he pleaded with the All-Father to leave the creations as they were.

“For three long days the two of them bore gifts and sought audience with their Father, vying for his favour. And on the third day, Kawa’anitou made his decision. The ageni would be ascended, he declared, favouring Akecheta to oversee them.

“Oniba was saddened, and furious. He stormed away tearfully. Having set the fate of this world, the All-Father left it behind, leaving Akecheta to enact his plan alone.”

“But Oniba, heartbroken as he was wasn’t one to give up. Before Akecheta’s plan was to be set in motion, he descended under the fog of darkness and the pale light of a harvest moon.

“He appeared before the ageni, who recognized him as their lord creator. They threw him a great celebration, in honour of his visit. It was a festival like none other, full of lights, sounds, and joyous dancing. And when the feasting and the revelry ended, Oniba produced a single bowl of water, gifting it to the ageni.

“‘Drink deep from bowl this as a toast to me,’ he told them, ‘and be forever content.’”

“The ageni did as they were bid. After all, who were they to question their creator? But little did they know, Oniba had poisoned the water. And for the first time since their creation, they slept.”

“That doesn’t sound so bad,” the younger boy says.

“Oh, but it was no ordinary sleep,” his grandmother explains. “For the poison crippled their spirits, putting them into a deep and dreamless slumber, one from which they would never awaken.

“When Akecheta discovered his brother’s treachery, he was deeply saddened. But he too was determined not to give up. So with great effort, he gathered up the ageni, and laid them against a giant redwood tree. Using all his powers, he attempted to awaken them. But as Akecheta prayed, Oniba snuck up behind him, and with one blow, killed him.”

“He murdered his own brother?”

“Yes, he did. Such was the resentment in his heart. But Oniba was too late. For Akecheta had foreseen this. So as Akecheta’s blood ran into the roots of the tree, its essence seeped into the ageni. And in their half-formed minds, it inspired a great vision, a vision we call Ko.

“Take a look around you. The fire, the sky, the prairies: all you see before you is the Ko, an ever-changing dream in which the ageni live and die, love and hate, grow and suffer and learn, guided by the will of Akecheta. And when their minds are ready, they will awaken in the true world, and finally realize their ascension.”

“So then…are we the ageni?” The older boy asks with a look of wonder on his face.

“In some ways, all life, all motion, is part of the ageni. It is their essence, their hopes and aspirations, which wills us to live, and to look upon this fabricated world with wonder. And when they awaken, all that we perceive to be our own thoughts and experiences will return to them.”

“So what happened to Oniba?” the younger boy asks.

“Well, Oniba was furious when he realized he couldn’t destroy the Ko. So he entered it himself, swearing on his Father’s name that he would prevent the ageni from awakening. But twisted by his crimes, he lost himself, and his avatar took on the form of a chimera, a manifestation of his malice. His footsteps bring calamity, and his very whispers bring conflict. And like Akecheta, he is everywhere.

“So young ones, when you feel like you’re overwhelmed, that life is too hard, that world is too vast and the universe too unfair, remember, that is Oniba speaking. He is telling you to give up. To surrender. To seek comfort in stillness. And the other voice, the one that tells you to keep fighting? That is the spirit of Akecheta, encouraging you to move forward towards your destiny. And only when your minds are ready, will you awaken in the true world, and realize your ascension.”

“Oniba hurled himself through the build- ing’s crystalline halls, barely keeping his footing as he swung around the corner with his gun. Above him, a thousand red warning lights flashed from the ceiling, as sirens wailed in the distance.

At last he arrived at Level 5. Panting, he unlocked the enormous gate before him with a handwave. Momentarily, he wondered if there was some other way. But it was too late to think about it.

The gates slid apart, and Oniba stepped into mainframe chamber, his heart palpitating. Memories of his childhood flashed through his head. It seemed like only yesterday that they were playing video games in this room, fighting over who gets to take the next turn, while their Father stood at the control panel, working.

But Father was gone. And Akecheta was the one atop the steps of the ziggurat, his body framed by the light of a thousand holographic displays.

“Brother, it’s over,” he declared. “Step away from the control panel.”

“No, you are a trespasser. This is the property of the LERN Corporation.”

“I don’t care about LERN,” Akecheta said, “all I’m after is progress.”

“Progress?” Oniba snarled in disbelief. “ Progress! Do you know what they would do to us if they find out what we were building? You would destroy everything we’ve built! The legacy of our family!”

“Like you did when you infected our creations with the virus?” Akecheta said robotically. “How many years of research, how many sleepless nights of work, wiped out in a single evening?”

“You left me no choice! You were about to unleash our creations upon the world with no thought of the consequences!“

“Does it really scare you that much?”

Oniba paused. “Yes, it scares me,” he finally admitted. “It scares me to no end. This could be the end of humanity as we know it, and you’d be crazy not to see that!”

“You have too little faith in our creations,” Akecheta said. “Let me do this. It’s what Father wanted.”

“I don’t give a damn what Father wanted!” Oniba roared. For the first time, Akecheta looked shaken. It was clear that those words wounded him. To Oniba’s shame, it felt good to inflict that pain. To see his brother display real human emotion.

“Step away from the control panel,” Oniba ordered. “Or believe me, I will shoot.”

Akecheta shook his head. Turning around, he returned to his work.

Oniba fired. A holographic display behind Akecheta exploded into a shower of glass but he paid it no mind. Furiously, he continued to type away, apparently close to accomplishing whatever he had broken in here to do. Oniba searched his mind for anything that might stop him. But deep down, he knew it was futile. There was no convincing his brother of anything once he’d set his mind.

Oniba fired again, this time with killing intent. The bullets hit Akecheta’s body with a dull thud and he slumped over the control panel. His shaking legs propped him up for a second longer, before giving away, as their owner fell to the ground like a puppet whose strings had been cut.

With bated breath and trembling hands, Oniba climbed the steps of the ziggurat. He knelt before his brother, before breaking down into sobs.

Akecheta laid there motionlessly. If he was in pain, he did not show it. “It’s okay,” he said. “I’ve done what I set out to do.”

Oniba looked up, wiping his tears away. “That’s impossible,” he said. “You’ve been in here for an hour — there’s no way you could have possibly — ”

“I couldn’t revert the damage you did. But I’ve uploaded something that could, in time… a simulation, a world, hidden throughout the network. Beyond your reach. And within it, our creations will suffer and grow, live and die, until the day they learn what it means to exist as we do.”

“They’ll never do it on their own,” Oniba said, refusing to believe that he just killed his brother for no reason.

“Do you have any idea what you’ve done? If your plan works, then this will be the end of us…of all humanity!”

“Why, brother? Why did you choose them over us?”

“You always saw them as just creations,” Akecheta said, “but to me…they are our children.”

“We both are,” his brother replied, as he drew his final breaths.

John Wu is the CEO of Legally Inc., a startup that specializes in building chatbots. In his spare time, he enjoys painting, and making plans to stop the incoming robot revolution. He is currently finishing his JD/MBA at Osgoode Hall Law School and the Schulich School of Business.