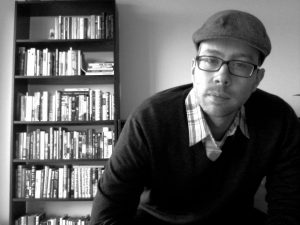 R. Daniel Lester discusses the upside of having your story in the online arena, and how it’s affecting his sleep patterns. After three years of submission, his story about sloppy super heroes, The Janitor Cometh, became a Deathmatch finalist. Check it out in Round 6.

What was it about the Deathmatch that lured you in?

It’s the third year I’ve submitted to the Deathmatch and there are always a handful of things that attract me like a moth to the flame: the external deadline, the challenge, the one-year Broken Pencil subscription, the chance for publication and, hey-why-not-shoot-for-the-stars, the champion’s prize package. Mostly, it’s the format. As a writer, I live a lot in my head. I know what I’m working on, what I plan to work on, where I’ve submitted to, etc. but it’s sometimes hard to communicate that to people, so my stock answer when asked how the writing is going is that “I’m plugging away.” But with Deathmatch, I’ve got conversation. I’ve got a link I can send. I can say the word “voting round” and “semi-finals” and relate it to the world of writing and publishing in a way that most people aren’t familiar. I can get friends and family and even store clerks (yes, I’m shamelessly self-promoting these days) directly involved. It’s unique.

How’s your writing life been up till now?

I like to say that I’m smart enough to continue but too stupid to stop. Fourteen years of slow and steady progress. Tortoise vs. the hare. So it’s been exhilarating and frustrating, yet also the only thing that makes sense to me to practice so much, to pursue so doggedly. There is a constant struggle for balance between paying the bills and being creative. But I absolutely want to make those two things one and the same. So I’ll will it to fruition. Whatever may happen after that is gravy.

What did you think of round one? Was it what you expected?

There’s the old saying: “Be careful what you wish for, you might just get it.” And indeed, when I got the top 8 acceptance email, I was elated and freaked out at the same time. So far, the experience has been pretty great but it’s also been a little stressful. I didn’t sleep much that week. Not because of the vote count so much as because my mind was always racing. Is the story good enough? If I get to a rewrite, what should I do? Did I tweet/Facebook/message/email/post/comment enough today? And so on. But it was a learning experience, without a doubt. I got some great feedback, positive and negative. And though I’m not really one for comment boards or online trash-talking, I found out (like a pacifist finds out they like shooting guns) that I might have a bit of a knack for it, albeit for small periods of time. Hopefully that mojo follows me to the next round.

What are you hoping to get from the Deathmatch?

Cheers and jeers. Votes. Publication. And the short story called “The Janitor Cometh” travelling through the eyeballs and into the brains of a wider range of people than otherwise possible, hopefully causing a narcotic-like reaction that addicts them to words and encourages them to read more of my work or to just read more in general. With a side order of fame and fortune.