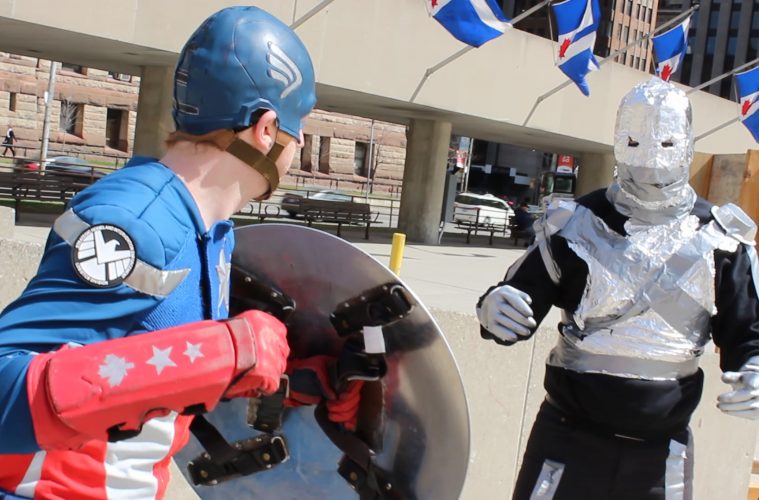 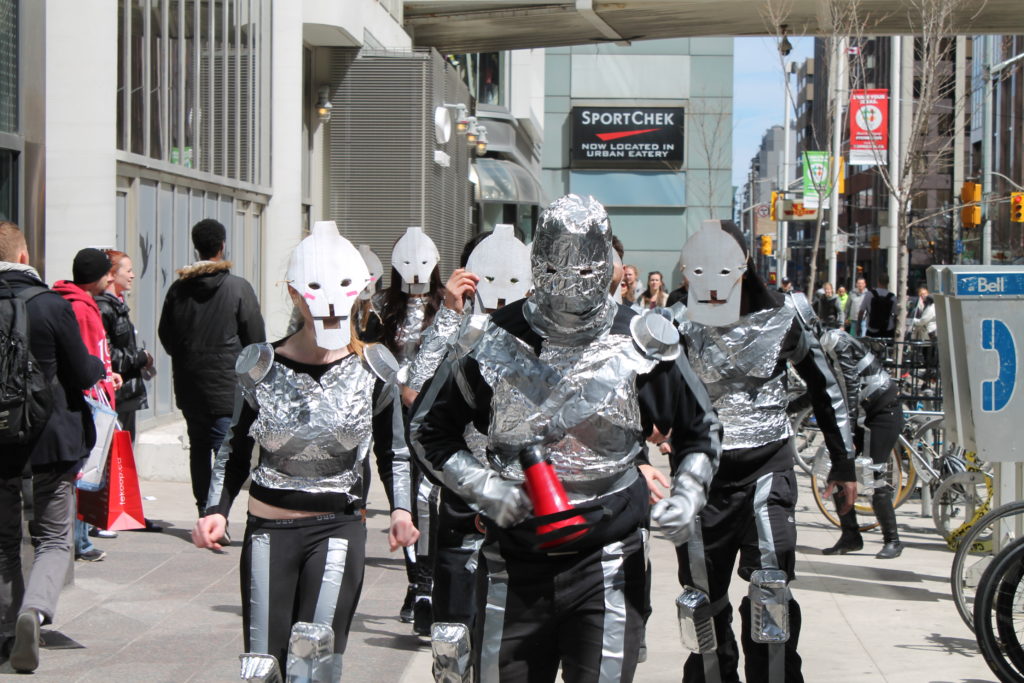 “Are you Boba Fett?”

“Do you know Darth Vader?”

Drew Eckhardt fielded these questions from the five-year-olds huddled around him at the Victoriaville Mall in Thunder Bay, Ontario. It was just before Christmas, 2016. A guy dressed as Santa wasn’t far off, but all young eyes were focused on Eckhardt and his fellow Mandalorian Mercs, thanks to their passion for full-gear Star Wars dress-up.

Eckhardt and his squad were covered head to toe with breastplates, gauntlets, helmets — all made from everyday material found around the house. Some sported bright reddish colours, while others looked more menacing in all black. At first glance, you might have thought Comic-Con had come to Thunder Bay.

The Mandalorian Mercs take cosplay — when fans dress up as their favorite characters — to the next level. This crew builds costumes and props related to an obscure culture that came out of the Star Wars universe. The “Mandalorians” are a people from the Outer Rim Territories who, despite a warrior past, are now known for their committed pacifism.

Eckhardt doesn’t get into these technical weeds as the children prod his armour — they’re more interested to know how hot he is under all that gear. Still, given the chance, Eckhardt might take a moment to explain how he and his fellow Mandalorians have a particularly DIY approach to their hobby, creating characters totally from scratch.

“Sometimes the role of the amateur gets forgotten and we expect professionals to do everything and do all meaningful things. But the DIY spirit applies to everyone.”

“Anyone can be an Imperial Stormtrooper, Rebel pilot, or a swash-buckling smuggler,” he says in an interview from his Thunder Bay home. “It’s uplifting to have heroes like Princess Leia, Wedge Antilles, or Han Solo, but equally powerful to know you can be right alongside them with your own character, own traits, and your own weaknesses.”

The Mercs pull off this powerful and playful creativity with the kind of commitment some of us reserve only for Halloween. After all, these are adults going all out as a Star Wars character creating stylish and complex costumes, props and weapons, inspired by their favourite films or TV show. Many of them don’t have any engineering or costuming experience.

This kind of deep DIY fan life is not just a passion people keep sequestered in their basement. Besides showing off the finished product on the streets and at fan gatherings, these creators are using tools such as YouTube to share skills and chronicle the process of building up a cultural icon from scratch. 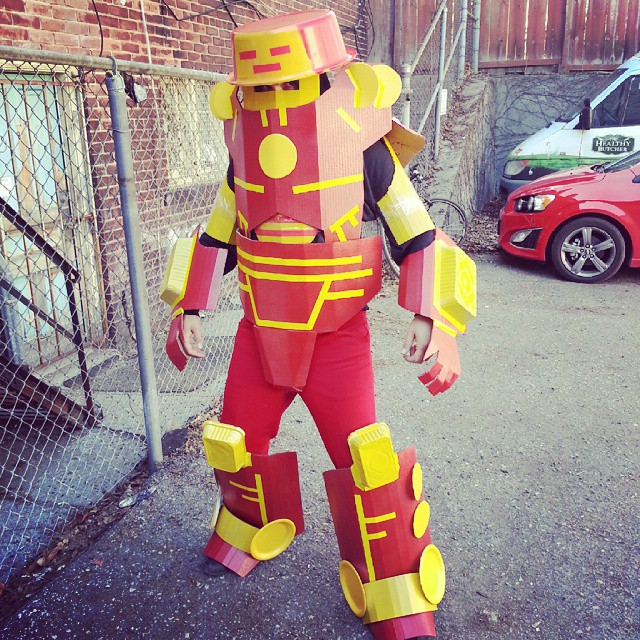 Under heavy guitar riffs on a YouTube video, I’m watching a blender take on a mix of potassium chloride, 70 percent isopropyl alcohol, acetaldehyde and road flare compounds. Then a fit-looking guy coats a sword, threaded with wicks, in this chemical smoothie. If this weren’t already a lot going on, the sword also features an electric lighter, a flick of which covers the weapon in a purple flame. Who doesn’t want to swing around a purple flaming sword?

In his massive garage, James Hobson, of Kitchener, Ontario, has recreated Psylocke’s “psionic sword” from the film X-Men Apocalypse. At 782,000 views, this video’s popularity is on the low-end for Hobson, aka The Hacksmith. With more than one million subscribers to his YouTube channel, Hobson has attracted more than 76 million views total since he began building fictional weapons and vehicles in 2006.

He’s one of many model weapon makers (though a rare Canadian) who reveals the secrets behind his builds, from Wolverine claws to Batman grappling guns. “We don’t just want to show the final product, but how we did it, to inspire any young engineers out there,” says Hobson.

Want to make your own fantastical armour? Here’s a step-by-step guide.

Hobson boasts an impressive engineering background and several years working at Dolby, and his expertise shows in his narration. He breaks down the math and science in simple terms. Judging by comments on his videos, he’s inspiring many gleeful builders-in-arms.

“Most are self-taught on the net,” says Hobson of his fellow weapons makers. “My engineering degree gave me a great background, but it didn’t teach me how to create cool things I saw in movies, video games and TV shows.”

Hobson is a big deal, and has fielded interest from TV executives, but he’s stiff-arming offers. “They wouldn’t want us to continue our Hacksmith YouTube page, and we can’t afford to do that,” he explains. 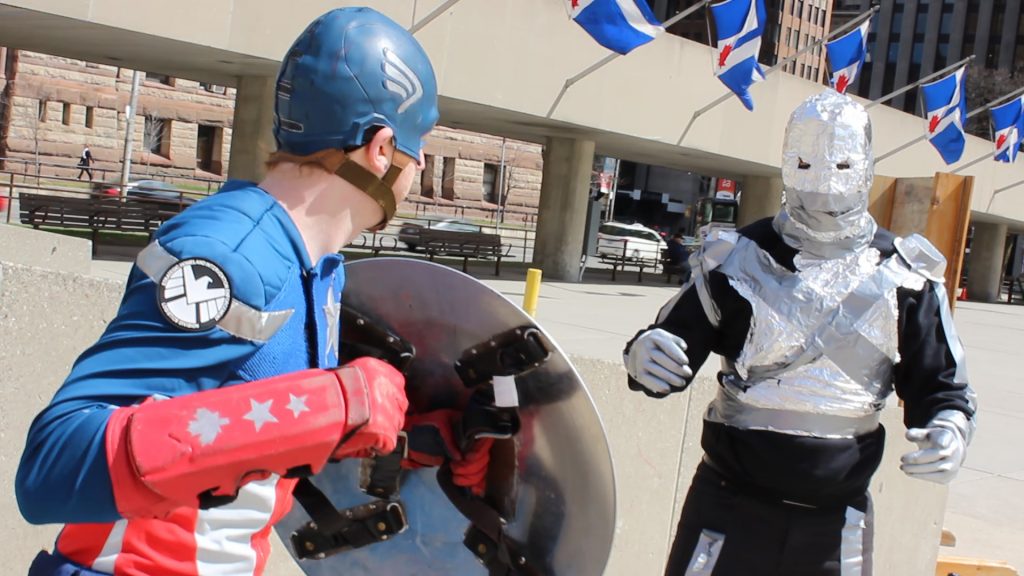 Another creator, Sean Ward, might not have Hobson’s technical know-how, but he shares the joy of creating videos for other fans and makers. The Toronto resident has shot more than 300 YouTube videos since 2010. Many videos blend fan fiction and costume play by creating skits and fight scenes with these characters. He ensures most of the videos are funny, which sets him apart from other builders who often take a more dour look-how-I-made-this approach.

Still, Ward is hands-on with makeup and costumes whether assuming the character of The Joker or Voltron. For Voltron, for instance, he bought cardboard sheets and coloured tape at an art supply store, and creatively angled the cardboard to ensure his body parts weren’t showing underneath.

Eckhardt, from the crew of Mandalorians, also has to get innovative. He uses materials such as Sintra plastic, Velcro, magnets and paint to craft the ideal armour and gauntlets for his character, which comes through in the colours he selects: red honours his family lineage, black represents justice, and gold exemplifies vengeance for his character’s slain grandfather. “This creativity allows me to express my personality, without people knowing my true personality,” Eckhardt notes.

With 1,300 active members, the Mandalorian Mercs group gives Eckhardt a community to claim beyond his life in Thunder Bay. “Even if I’m far from everyone physically, I feel close to them,” he says.

Others in the scene find like-minded people through Maker Faires. These meet-ups, which happen in Vancouver, Toronto, London and beyond, are designed to let tinkerers and wannabe engineers show off their goods in front of other builders or fans. 3D-printed sculptures huddle next to mini drones, neighboured next to art made entirely out of bike parts.

The founder of Maker Faire, Dale Dougherty, tells me in an interview how he wanted to create a hub for the everyperson designer. “I’ve always been interested in people’s passion projects,” he says. “Sometimes the role of the amateur gets forgotten and we expect professionals to do everything and do all meaningful things. But the DIY spirit applies to everyone.”

In 2016, more than 190 Maker Faire events curated builders and their followers in more than 35 countries around the world.

Hobson, the Hacksmith YouTuber, also encourages aspiring hacksmiths to check out hacker and maker spaces like Toronto’s Site 3, or MakerLabs in Vancouver. These spaces are smaller, and often employ a more workshop-heavy model. “For those who don’t have the setup I’m lucky to have, hacker spaces can be a great way to join up with that community,” he explains. 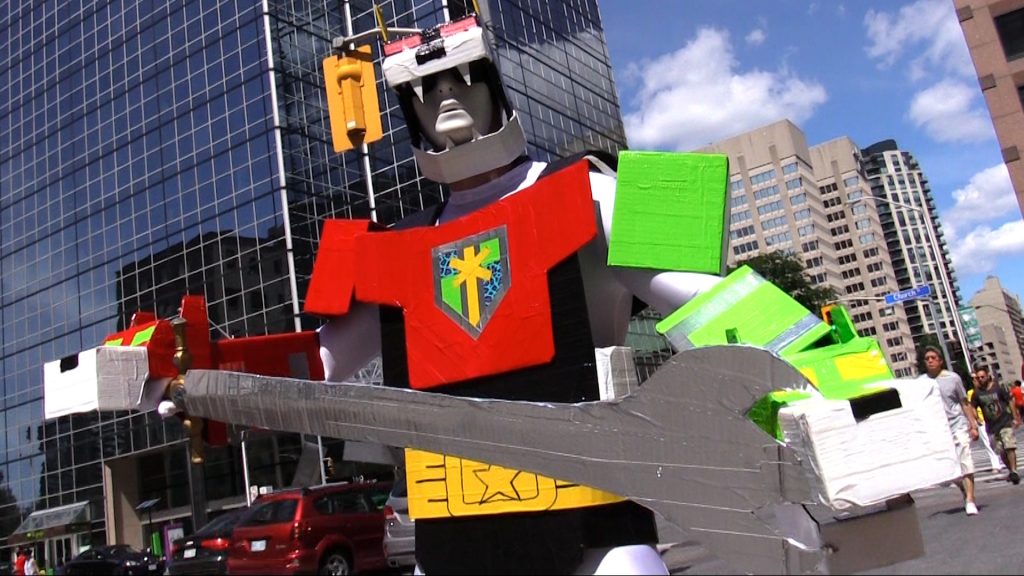 Amid the bitter winds in Iqaluit, Nunavut, Rejean Martel Cooper is building a battle axe for his Mandalorian character. The story of the axe? “It was forged from an Admiral’s flagship that Mandalore melted down from scrap after a battle.”

On his work table is a sketch of the axe, carefully measured; an extendable flag pole for the shaft; a screw-on part of a mop end to attach to the flag pole shaft; a wooden dowel carved at one end and slit down the center to hold the bladel and Sintra plastic for the axe’s blade. After hours of cutting, sanding, painting and weathering, this axe is ready for Martel to flaunt with his armour and helmet.

“It really is something else when people approach me and realize I created something from scratch,” Cooper says.

Cooper is a proud part of this emerging culture, where the builders can let their geek flags fly. Fan creators don’t just want to stick to their backyards and basements. Like Eckhardt, Cooper cherishes the community formed around Star Wars costume clubs, and builders like Hobson have harnessed YouTube to ignite a digital convention where everyone is invited to take part.

Despite the high-budget and big-box vibe of the series and cinema they work from, this new set of creators and community builders are doing it wholly for, and by themselves. No Hollywood experience required.