Excerpted from Fascinating Folks by Antoine and Siue Moffat 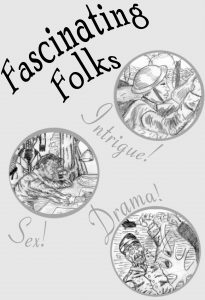 Eugene Bilbrew was a talented African American vocalist and illustrator born in LA in 1923. It is possible that Gene was related to the famous jazz singer Kitty White and her mother A.C. Bilbrew. Kitty was also born in LA in 1923. (Interestingly, Kitty’s first name was Jean.) A.C. Bilbrew organized gospel groups around town. There is very limited information on Gene, so his relations are just speculation.

Going through school as the class clown with no respect for authority, he dropped out of high school and spent his time hanging around the burgeoning popular jazz scene. When he and his friend Bill Alexander, who later started Bizarre Comix, went to an Ellington show in the late ‘30s, Gene got hooked on the zoot suit scene and doodled fan drawings, but only for his own amusement.

He began his illustrating career collaborating with Bill Alexander on The Bronze Bomber for the Los Angles Sentinel, the oldest and largest Black-run newspaper in the western United States. He also did interesting freelance work throughout his life including modernizing the covers of Victorian era lottery books with names like Gypsy Witch Dream Book and covers for jazz and R&B records.

The Bronze Bomber was ahead of its time, incorporating white and Black characters in both hero and villain roles. Unfortunately, it only lasted a year and Gene went on to do Hercules comics for Health Magazine. But illustrating was most likely only money to him. He loved music and wanted to be on stage.

Sometime before the ‘50s Bilbrew joined the rhythm and blues act The Basin Street Boys. Their song I Sold My Heart to the Junkman was incredibly popular in 1947 (and was covered by Patti Labelle and Bruce Springsteen). The group went on tour and ended up in New York where they broke up in 1951. Gene was left stranded. Comics were starting to boom, so he fell back on his “second” talent.

Gene got a job as an inker for the famous Will Eisner and The Spirit. Although it did not pay well, it gave him confidence to continue on and improve his skills. He went to school at The School of Visual Arts in New York City. There he studied under Burne Hogarth, the Tarzan comic strip creator. Gene’s work was very unique, imaginative and he had a style all his own. Sometimes offhand, sometimes working painstakingly, his work was different than other comic artists.

He became friends with Eric Stanon who was working for publisher Irving Klaw – pin-up photographer who brought Bettie Page to stardom. Stanton suggested to Gene that he give Klaw a try. He wasn’t particularly interested in fetish but Klaw paid and paid well. Soon Gene was drawing under such pseudonyms as “Eneg: (Gene spelled backwards), “J. Bondo” and “Van Rod”. He left Eisner’s studio and dropped out of school.

Although quite tame by today’s standards, 1950’s sleaze comics were sold under the counter and through the mail. Klaw’s stuff was definitely subdued compared to later publishers Gene worked with. Klaw was against having anything phallic in the panels and men didn’t even appear in early work.

Gene began working on trashier, more erotic book covers through mobster Eddie Mishkin. Gene was doing more lesbian and gay content, some of which today seem sort of quaint and fun. A man on a couch watches as a slim male dancer flies in front of him; two Bettie Page type women put a man in stockings and high heels. Mishkin also published more pornographic material and that was what got him in trouble in 1955. His “Nights of Horror” magazines in particular, which were illustrated by none other than Joe Shuster who co-created Superman, focused on torture and drug addiction. He and his work (including some of Gene’s illustrations) were put on trial in the Supreme Court during the comics crackdown. Mishkin went to jail in 1966. (Why Mishkin’s products were put on trial during a commission on JUVENILE delinquency can only be attributed to easy censor ship. Mishkin’s books were never sold above counter to young comic readers. They probably would have been bored by it because most were not comics and most of the books with racy covers had text that failed to deliver on the inside.) 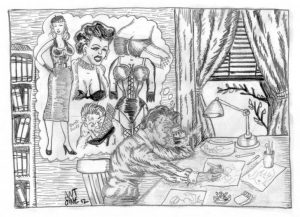 At some point Gene begins to use heroin. It is not a surprise considering who he was associating with and where he was hanging around. From the 1930s to the 1990s, and especially during the ‘60s, ‘70s and ‘80s, Time Square and 42nd Street was a very seedy place. Upscale hotels were replaced with flop houses and sex shops took over boutiques. Child porn, drugs and prostitution ruled that part of Manhattan. Jim Linderman, who has put out two books on Gene’s work, suggests that his heroin habit was partly acquired because of his day-to-day dealings with racism. Gene is said to have been a sensitive soul who could not deal very well with overt persecution because of the colour of his skin. Interestingly enough, when we searched for information on Gene we came across hundreds of items of his work. Only one had any drawings of African Americans (and that story was focused on a white woman falling victim to a “negro’s prowess”). It could be that Gene felt disconnected – he had started illustrating for his community, a very positive character, and ended up catering to the bottom of the barrel of the white world.

In 1974, at 51, Gene overdosed on heroin in the back of one of Eddie Mishkin’s 42nd street bookstores.

His influence is still seen in dozens of comic artists and illustrators. One wonders what kind of interesting work he could have produced had he been able to get off drugs and get out of the smut gutter. At the time of his death, African American superheroes were on the rise in popular culture. We wish he had the opportunity to go back to his roots.

None of Gene’s original art exists.

Fascinating Folks #1 tells the stories of five incredible people that history forgot. From a Japanese female anarchist to a sleazy comic artist, this zine brings to life colourful folks with graphite illustrations and insights into their fascinating lives.

Antoine has been doing cheap DIY mini comics since he was a child. He is influenced by the works of “heta-uma” (unskilled/skillful) Japanese artists like Teruhiko Yumura and Takashi Nemoto. Antoine also finds inspiration in the artworks of outsider artists and classic ’60s underground artists such as S. Clay Wilson and R Crumb. He currently has three zines coming out: Dead Haitians, Night at the Stink Hole and Different People Different Thoughts.

Siue Moffat began writing zines in the late ’80s. She is the author of two vegan dessert cookbooks called Lickin’ the Beaters. Siue joined forces with Antoine in 2011 to form Pumpkin Pie Press.