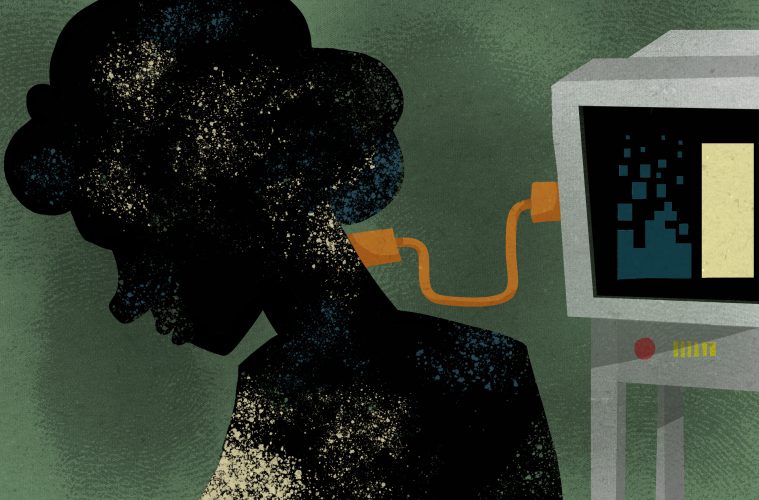 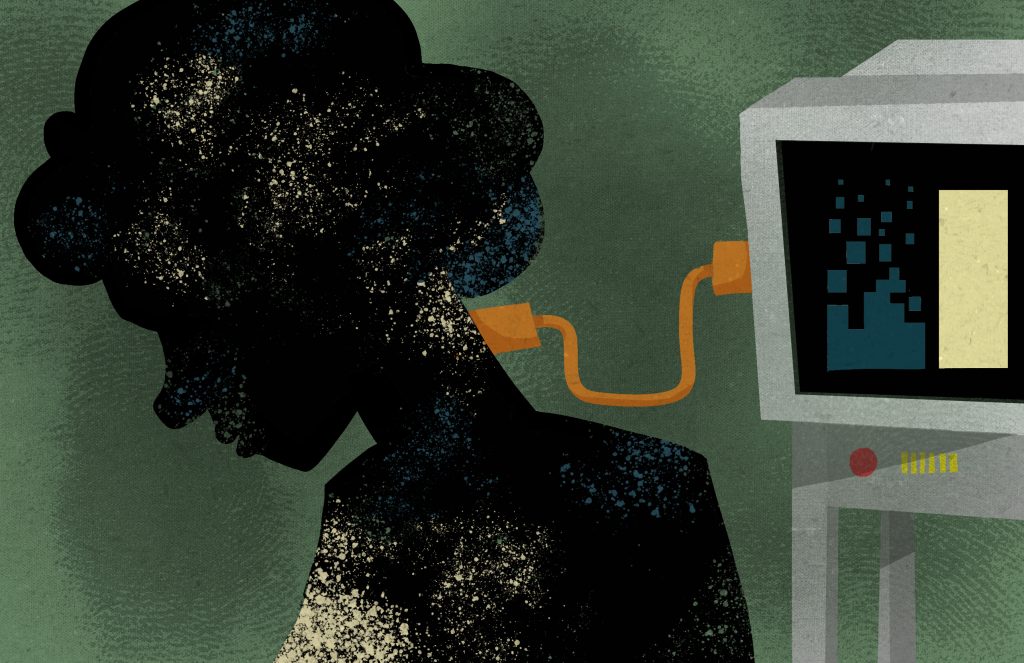 She can’t remember the important bad things. I ask her about the divorces and the dead dogs buried in the woods and the cracks in the bathroom tile and the negative, blood red balance in her checking account and her eyes go blank and she shakes her head like she’s been overcome by some faint neurological chill.

I show her a photograph of my 8-year-old self in snow pants and a knit cap and she smiles and coos with familiarity, but cannot say what happened that day. She can’t recall what happened in the van when the park was closed and her father got angry. She cannot look at the burn mark on my arm and apologize.

A life ago, I worked at a VA hospital, sponging the slim bodies of the patients who could not move. I also volunteered to cut the old women’s hair. I had a steady hand and good instincts. I could transform a yellowed, scraggly mop into a coiffed, snowy white puff in less than an hour. They sat shaking below me as I transformed them into beautiful, wise owls. I took pride in my work.

The psychiatric nurses warned me not to let the patients with pink wristbands go anywhere near a mirror. If they caught sight of themselves in a spare bedpan or blackened television, I was cautioned to pull them away, distract them, or turn a gameshow on.

Those pink-wristed patients had anterograde memory failure. They lived forever in the hazy past, unable to form memories of new events. In their minds, they were many decades younger, still dewy and unfinished. When they caught sight of their reflections, they did not see themselves. They saw their grandmothers, or aunties, or the old women who sat behind them at church, purses filled with butterscotch. The disparity between imagined and actual self was a massive source of distress for those pink-wristed patients. They dealt with the shock in unpredictable ways.

My mom’s re-up is kind of like that. When she was dying, she chose to upload only the best memories. Storage space came at a premium back then, so she sifted through her brain to select the stand-out favorites. There was no incentive to uphold the truth. I cannot blame her for that. I just can’t. It would make me crazy.

I love what is left of my mom as best I can, and she loves me better than ever. She remembers my knobby knees running through the sprinkler. She remembers the cartoons I would watch on sick days, belly-down on the carpet, and how my face looked propped up on the heels of my hands. She eats the peanut butter and grape jelly sandwiches I make her and remembers that they are her favorite. She enjoys cold cereal and milk for dinner, especially when it is hot out. It is always hot out, now, but she cannot remember why.

She remembers my graduation, and the crimson velvet sack I wore, but not the partner who stood by my side or the yellowing bruise that peeked out of my sleeve. She remembers long summers of riding rollercoasters, but not my violent puking. She does not remember her dead son, who lived to be ten, then withered away in an oxygen tent. When she came to live with me, I was forced to hide all his photos. When she discovered them in the garage, I was forced to tear them up and flush them down the toilet.

I’m glad to have this happy remnant of her, sleeping all day in my guest room. She is always near my heart, like a precious heirloom jewel hanging off my neck. When she died, brain uploading was still a novelty, so her resurrection felt like a spell from a fairytale. Of course there was a curse embedded in it. All the worthwhile spells are costly like that.

At night we sit in the kitchen and play dozens of games of UNO. We sit on the loveseat and share a bowl of black kernel popcorn while watching TV. She remembers all the lyrics to The Sound of Music and The Wiz. I stare at the movements of her shiny plastic face while she sings them.

I try, so hard, to keep her from seeing my sadness. It is an unfamiliar sight to her. She has no memories of the sad me. She takes my cheeks between her plastic fingers and tries to tug at the muscles buried beneath my skin. There is something bad happening she has no capacity to understand. I have a responsibility to hide from her that which she cannot fathom. She will break herself trying to fix it.

Erika Price is a writer and social psychologist in Chicago. Erika’s work has appeared in The Rumpus, The Toast, Bacopa Literary Review, Literary Orphans, and has been nominated for The Pushcart Prize.