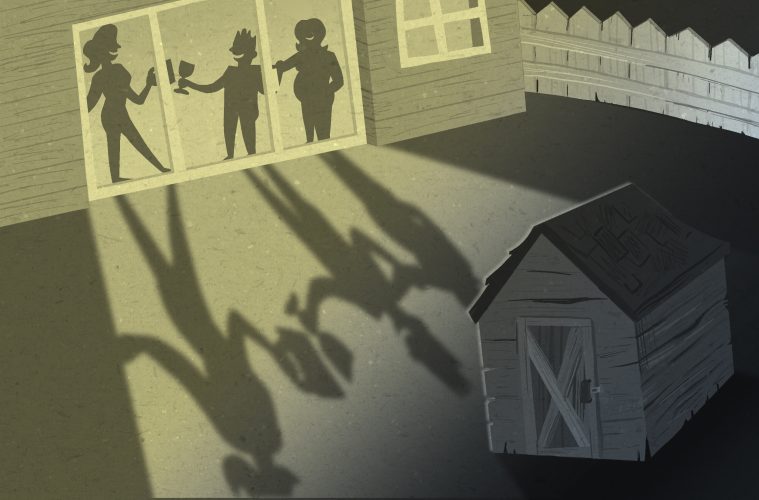 Fiction: The Sisters and the Ash

When the mother ghosted, the three sisters were left with her rings and her teapot and her hairbrushes full of long gray hair. They were left with a gray house, stained walls, and a very drunk father, his belt and his rage.

While on a camping trip in the mountains, the eldest met an old but agile crone who lived in a cave. From the crone, she learned a rare martial art which she quickly mastered and taught to her sisters. Each sister slept with a beautifully jeweled knife—a surprising parting gift from the mother—tucked under her pillow.

One night the father came into the youngest sister’s room to massage her feet. She struck him so hard in the chest that he fell backward. From the floor he saw her knife glittering above him like a menacing star.

After that, the father began to live in earnest fear. He took up the anxious habits of one afraid. Smoking. Pacing. His old addictions—yelling, beating, and drinking—were no longer allowed. He dared not smoke in the house after his middle daughter’s strident lecture on secondhand cancer. He cowered in the corners of the rooms, covering his words with coughs. The sisters pretended he wasn’t there—and indeed, he became nearly invisible to them, just a light mildew dusting the baseboards, fading to green-gray mist.

One day the eldest sister entered the living room carrying a soapy sponge and a bucket and the father retreated to the garage to hide among the rusty car parts and old sports magazines. Chain-smoking, he’d leaf through swimsuit issues, looking at breasts and thighs, the hint of a carefully shaved mound. Even the youngest bodies were like dead wood to him. Nothing plucked his imagination. A lead-stomached grief filled him, where once had been virile rage.

In his absence, the house became cheery. The sisters washed all the walls and painted them bright cherry, sassy turquoise, I-caught-a-canary yellow. The father’s ratty furniture and smelly clothes made a heavenly bonfire when burned with sticks of fragrant incense. There were late and loud parties, stomping dances, music of horn and saxophone and trumpet, each sister emptying her lungs into song. It was as if their father had never been born, had never lived.

Years passed. The sisters took lovers and let them go, deepened friendships, learned trades, grew an abundant garden. The middle sister became a brother. The youngest had a child they collectively raised. They had long forgotten the father when one day the youngest sister went out to mow the lawn and noticed a ghost ship—the garage—sagging at the edge of their property. She thought it would make a nice art studio for the child.

The door was bolted from the inside. She had to kick it open. Dust upon dust—she could barely see for all the motes stirred up in the air. At the back of the garage she saw a shrunken figure balanced between a bench and a worktable. She stepped closer. Under a thick layer of dust was a skeleton barely held together by the thin paper of its dried skin. Between two fingers, a dead cigarette, a long fingernail of ash at its tip.

The daughter blew softly and watched as her father crumbled to dust.

Originally from Portland, Oregon, Jen Currin has lived in East Vancouver for fourteen years. She rides her bike nearly everywhere and has gotten better at growing vegetables in her community garden plot. Jen teaches creative writing and English at Kwantlen Polytechnic University. She has published four books of poetry, including The Inquisition Yours, which won the Audre Lorde Award for Lesbian Poetry in 2011; and School, which was a finalist for the 2015 Pat Lowther Poetry Award, the Dorothy Livesay Poetry Prize, and the Relit Award. Jen has recently finished a book of stories, called Hider/Seeker.