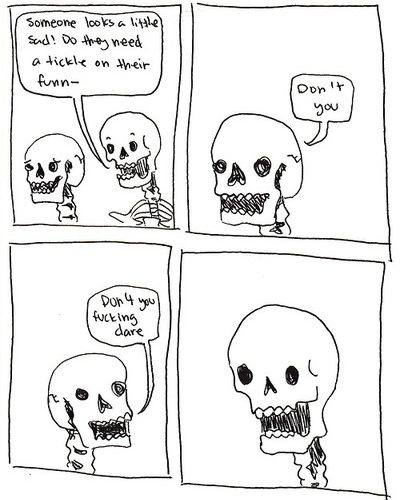 Found on the Internet

If any bookworms and magfiends will be at Word On The Street on Sunday, drop by the Broken Pencil table if you have time. We’ll have treats galore (certain interns might be bring certain baked goods) and slammin’ mag subscriptions up for grabs.

Stuck In The Sound’s Let’s Go – A French indie band’s catchy tune skyrockets with the animated visuals of one man’s life. Without speaking, his lonely journey to become an astronaut tears at your heart.

Skeleton Comic – If you’re like me, you’re constantly tormented by the lack of skeletons in your life. Fear not! Tumblr user frenums has an art tag filled with spookiness, bad puns and occasional non-skeleton stuff, if you’re into that sort of thing. (Side-eyes)

Antonio Santin – Does anyone really use carpets for anything but hiding bodies? I mean. Come on. Madrid-born artist knows what’s up.

Dear Sister – Briarpatch Magazine’s Lisa-Factora Borchers has excerpted two letters from Dear Sister, a forthcoming book that compiles letters from sexual violence survivors. The letters are powerful cathartic works, painting images of trauma and the worst that comes after it.