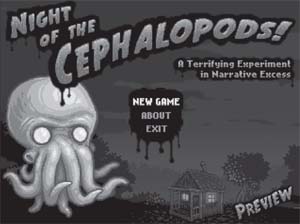 From Paint to Pixels

Note: Indie game designer and educator Benjamin Rivers (featured in the story below) will be delivering an eight-minute indie talk at this year’s Canzine Symposium on Saturday October 20, along with many other creators, artists, writers and performers. To learn more and register for this brand-new event, please click here.

Six people sit in a room at the Parkdale Public Library in Toronto, listening to a novelist explain the joys of video game creation. The room is decorated with paper snowflakes and posters that read “Baby Time” and “Toddler Time.” The six are not game designers. They are starting from first principles. They sit in a semi-circle with laptops and notepads and throw game ideas around. 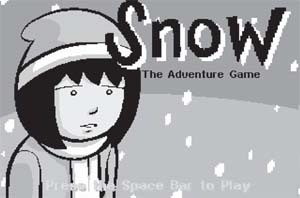 You start out as a grasshopper, and as you evolve through each level you become a frog, then a bunny rabbit, then a kangaroo. There’s these exploding clouds…”

“It’s a search for inspiration. The idea is you’re diving into the infinite unknown to find your inspiration. You have to quest for different combinations of ideas…”

“It’s not going to be very action-oriented. I want it to be based on graffiti. There’ll be cops you have to avoid and certain areas you have to get to to put your piece up…” 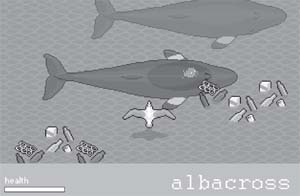 (nomediakings.org/artsygames), a why-the-hell-not? program intended to introduce artsy types to the geeky world of video games.

“I don’t believe that someone has to be an expert in the classics to write a good book,” says Munroe. “I believe that someone can come to a medium like video games and do something really inspiring without having any background. The idea is to bring people in who have very creative minds and introduce them to this medium to see what happens.”

On three occasions since 2007, small groups of writers and illustrators have gathered in small rooms to make small video games. It takes six weeks; one night a week, plus homework. At the end the participants have made working games that, for graduation, are posted to the Internet for all the world to play.

“It’s kind of like a writers’ circle for first-time writers, except it’s making games,” says Miguel Sternberg, a participant in the last round of the incubator. “It’s a chance for people who want to start making games to have a bunch of other people around them having the same experiences and making the same mistakes. They all have slightly different skills and they can all help each other out.”

Sternberg is a 3-D animator, graphic designer and illustrator. He’s made art for video games for years, but until the incubator he had never made a game from start to finish.

“I found it liberating,” he says. “There was finally this chance to start making the stuff I was thinking of without having to track a programmer down. It’s sort of frustrating if you’re an artist working in games, because you can’t actually make the thing that you do. You can make just a part of it. This is a chance to break out and do the other parts, even if they’re much simpler games.”

Sternberg’s game, Night of the Cephalopods, is a 2-D horror shooter. The player wanders through the murky night, seeking shotgun shells to keep a horde of ghostly squid at bay until dawn, while a voice provides Lovecraftian commentary: “Shot after shot, my aim remained true, and the ground grew dark with ink and blood.” The whole thing was created without writing a single line of code, thanks to some free software called Game Maker.

“I was talking to a couple of friends of mine who are real game designers,” says Munroe, “And I was saying, ‘Wouldn’t it be great if I could connect artists with people who are programmers? I think some really interesting games would come out of it.’ And they said, ‘No, don’t do it! Don’t call programmers!’ And these are programmers. Their suggestion was to get people to use tools that already exist that could be used without programming experience. These are point and click tools that can sort of be compared to desktop publishing.”

The incubator introduces participants to a number of drag-and-drop game design programs, such as Adventure Game Studio, Scratch and Processing. All are freely downloadable and require no knowledge of programming to use.

“My initial tests were done with the RPG [role-playing game] style in mind,” says Benjamin Rivers, illustrator, graphic novelist and incubator alumnus. “But once I became familiar with the development tool Adventure Game Studio, I realized that my game was better suited to this other genre.”

In Rivers’ game, Snow, the player guides a young woman along an isometric representation of Queen Street to her job at a bookstore. The game is all character and conversation. The gameplay is pure point-and-click exploration.

“The process of creating Snow was thrilling,” says Rivers. “Before being accepted into the AGI, I had pages of thumbnails, flowcharts and storyboards for what I felt Snow should be. The AGI helped to focus all those ideas and concepts and suddenly make them real. I had a real deadline, real feedback and a real challenge. It gets difficult after so many years of playing games to ignore the urge to make one yourself. I see opportunities and ideas in various games and genres that, for many practical reasons, don’t get fulfilled. I wanted to take a chance to express some of these ideas myself.”

“I was pretty much instantly hooked,” agrees Incubator graduate Rosemary Mosco. “I came into the AGI round with a tentative idea for a game and a few sketches, and I was amazed to discover that I could make exactly that game on my own. It’s just really neat to see your art come to life.”

Mosco’s game, Albacross, is about a seabird trying to make its way across a garbage-strewn ocean to where its mate is waiting. It is, in a gentle way, an action game, with food to find and dangers to avoid. It was also created with Game Maker.

“I’m interested in using new media to try to convey environmental themes,” says Mosco. “I’ve done web-based and print-based environmental comics, and video games seemed like another way to explore these themes. Learning new programs can be daunting on your own, so I was excited about doing so in the company of other artists.”

“Coming from playing Half-Life and BioShock I expected that our dinky little projects would be pretty pallid in comparison,” says science fiction writer Peter Watts. “And of course, compared with Half-Life and BioShock, they are. But I was surprised at how much fun I had. Working out the logic of the underlying graphics and gameplay was a lot of fun.”

Watts’ game, Mouse Police, is the opposite of gentle. You are a cat, and you kill mice.

“I think it showed promise and had some nicely subversive elements,” he says. “I’m pretty sure that exploding into a morass of blood and guts is a pretty unusual way to level up. In its current state, the second level is just a movable maggot on a field of gore. I never got around to growth factors, or actual predation, or pupation.”

After three Incubators attended by about a dozen word-of-mouth participants, Munroe feels the concept is ready to expand to other groups and other cities.

“It doesn’t require any funding,” he says. “All it needs is someone to organize it. It offers people an in-person meeting. These things exist on the Internet, but it’s not as significant. If you have to email people and say you didn’t do something, big deal. If you have to show up and say ‘I didn’t do it,’ it’s more motivating. And there’s beer.”

The next round of the Incubator will be underway by the time this is published, headed by former participant Miguel Sternberg. He also looks forward to an expansion in Canada’s indie gaming scene.

“Games right now are a challenge because we still don’t know what the hell we’re doing, but that also makes it exciting,” he says. “It’s so broken. There are so many places to go and fix things. That’s what’s so great about games. We really don’t know what we’re doing yet.”

Comic creators learn to trade in their pens for joysticks