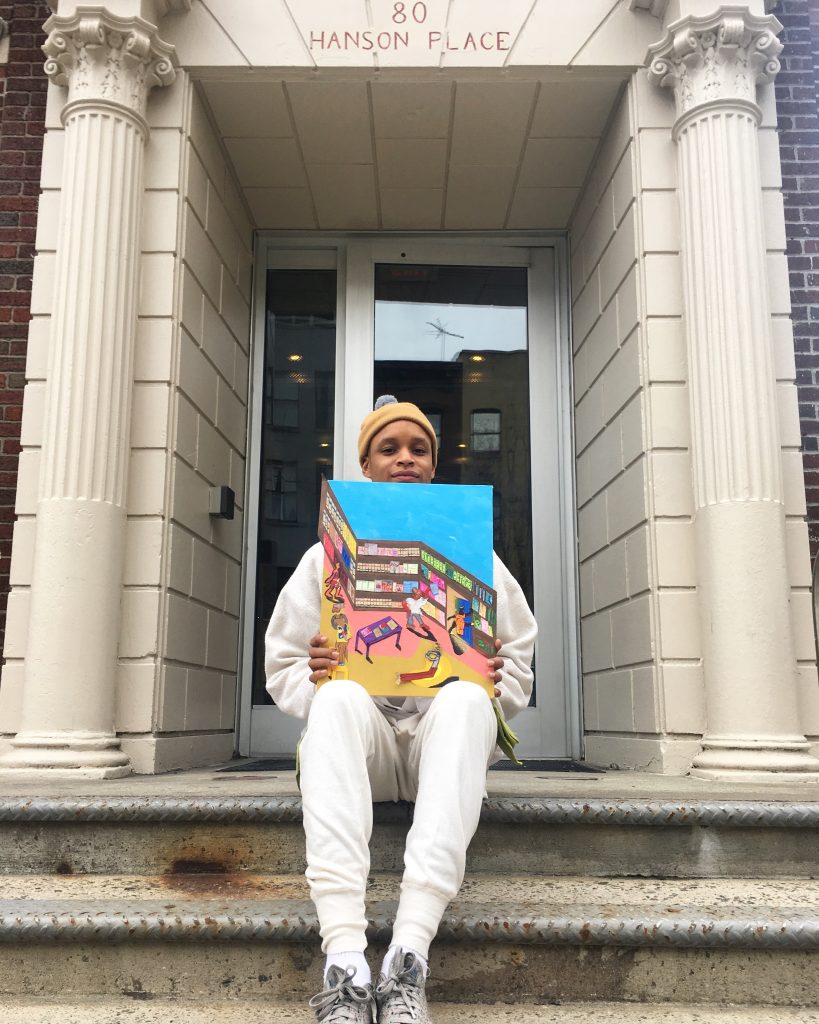 With an unmistakeable resurgence of zine fairs across the world, it can feel like there are dozens of zine fairs every week. Although zine fairs happen in so many different geographic contexts, we’re also seeing the emergence and re-emergence of zine and small fairs that centre around the identities and subject matters of the creators. Take feminist zine fairs from Australia to Philly to Hamilton, the incredible success of the Toronto Queer Zine Fair, and rumours of a zine fair for Asian diasporic creators on the horizon, it’s clear that there’s a need for zine fairs centring marginalized artists. There is, of course, a parallel need for mainstream fairs to make sure that they are reaching and including as many people as possible, especially those who face barriers to accessing art spaces.

At the end of January, Devin N Morris threw Brown Paper Zine and Small Press Fair at the Museum of Contemporary African Diasporan Art (MoCADA) in Brooklyn, a zine fair where all of the exhibitors were black folks and people of colour. Morris, who is the creator behind 3 Dot Zine, said it was an easy enough, even obvious idea to come up with. We caught up with Morris to talk about how it all worked, and how folks can do better to support zinesters of colour.

Broken Pencil: So what was the genesis of Brown Paper, and how did it all come together?

Devin N  Morris: I’ve been invited to a good amount of zine fairs. Sometimes it gets weird — people will see a brown person on the cover of your book and won’t touch it.

I mean, I’ve done well with what I’ve sold. But zines cover a lot of specific issues identity wise, race wise. Sometimes, when somebody is looking at your work, they’re sensationalizing it,  instead of saying oh yeah, thats your experience, and here’s my experience. A lot of the time that conversation comes off like, they don’t know where the “glamour” is in what I’m talking about.

But I’ve never been to a fair that’s half POC and half white. It’s normally like 89% white and 11% POC. The people who come to my table are so happy to see me, and they want to buy, because they see themselves in the work. They didn’t go to design school or school for art, and it’s not necessarily as valuable to them as much as saying oh this piece of work has me in it.

One of my friends was like maybe you should do a fair, and I was like yeah, I should! I was thinking of getting into publishing, but a fair is low key easier than like publishing. You just get space and you’re like hey, everybody come hang out.

So it makes no sense to me that the mainstream fairs would ignore making the community as large and inclusive as it could possible be. You could literally just google “zine” plus “African-American”, “Asian.” Or start thinking like, we already know we have some constituents representing this and that at the fair, why don’t we do a little outreach to people who aren’t represented.

Sometimes with identity based zine fairs, or zine fairs trying to centre marginalized people,  there’s a fine line between creating that platform, letting people self identify, but also not policing anybody’s identity. How do you negotiate that?

I didn’t have an issue. Really, I just wanted the money to go to a brown or black or POC person. You’re from any country in Asia? You’re good. I don’t care if you work with white people, but who does the money go to? Who runs this business? As long as it was brown person, we are good to go.

If I give you a table, I’m giving you a resource and a way to make money as well, I’m trying to make you money. That’s first and foremost. And I know who I specified I wanted to work with. But however you identify is how I’m going to bring you into the space — who am I to ever question your identity in that way?

Now with like, a queer zine fair trying to centre brown and POC people, that can be a little challenging too, if you then are still open to having white tablers with you. To me it just becomes about a percentage — what is the percentage of space that you’re giving someone. How much space are you giving the thing you intend to centre, and how wide is the broader more open space. 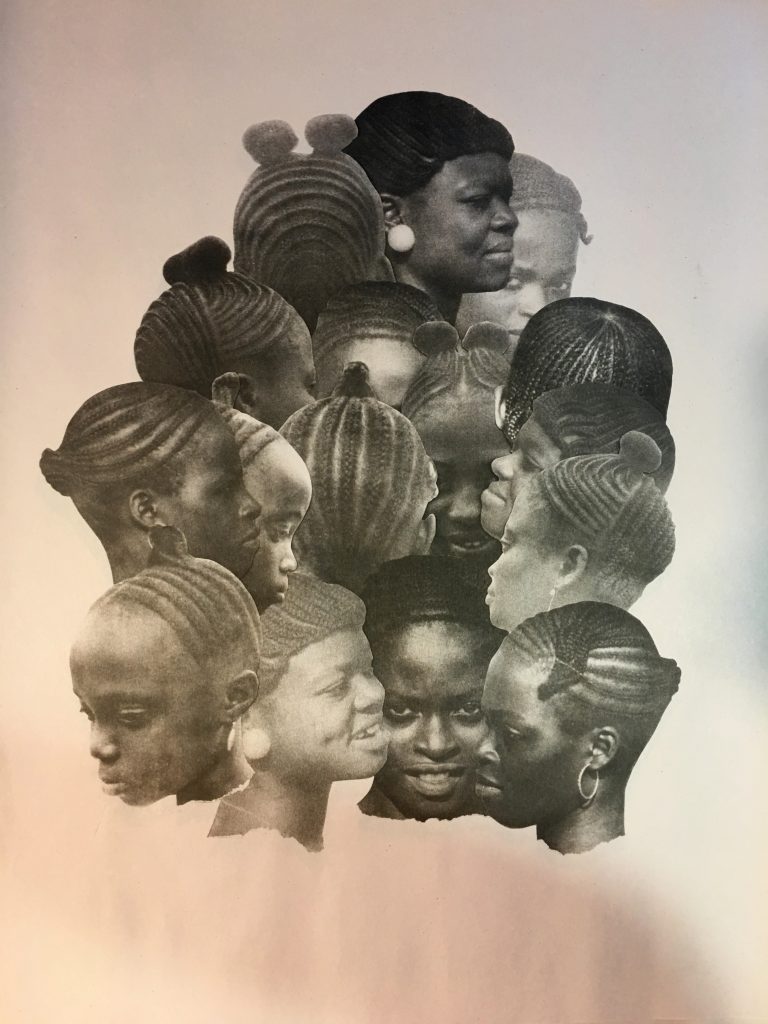 Right. So, how did the zine fair go after all that?

The support was crazy, it was really shocking. I was awed by the amount of people who shared the information about the fair, the people who replied to my messages who said they wanted to come and experience it, the amount of people on Facebook who were interested, all these different faces who were like,  “Yo, I might have been ignorant to how necessary this space is.”

I know how beautiful and easy the process is for someone else to have me at a fair table. It’s so easy for people to agree and accept and come, but it’s obvious that some people aren’t being approached or finding the opportunity.

So just doing an open submission as [Canzine] does, and you see that you get mostly white bodies… Remember that these people need to be sought out a little bit. Especially if they’re not obviously not in the spaces. So I was happy to be able to access everyone, and work with people and bring out so many different perspectives, I wanted to centre women in the fair and most of the tablers were women. There were a few women’s collectives, like I got an email from Toronto folks who couldn’t be there, but the Yellow Jackets Collective was able to bring their work down.

I love being able to transfer so much responsibility to the tablers, and I ask everybody to make sure that as many zinesters as possible can be a part of it. You know, you found that book because you liked it — so you can give a space for it, and share it at your own table.  And so many people did that. All these tablers also put in so much hard work to find these books and to have it. 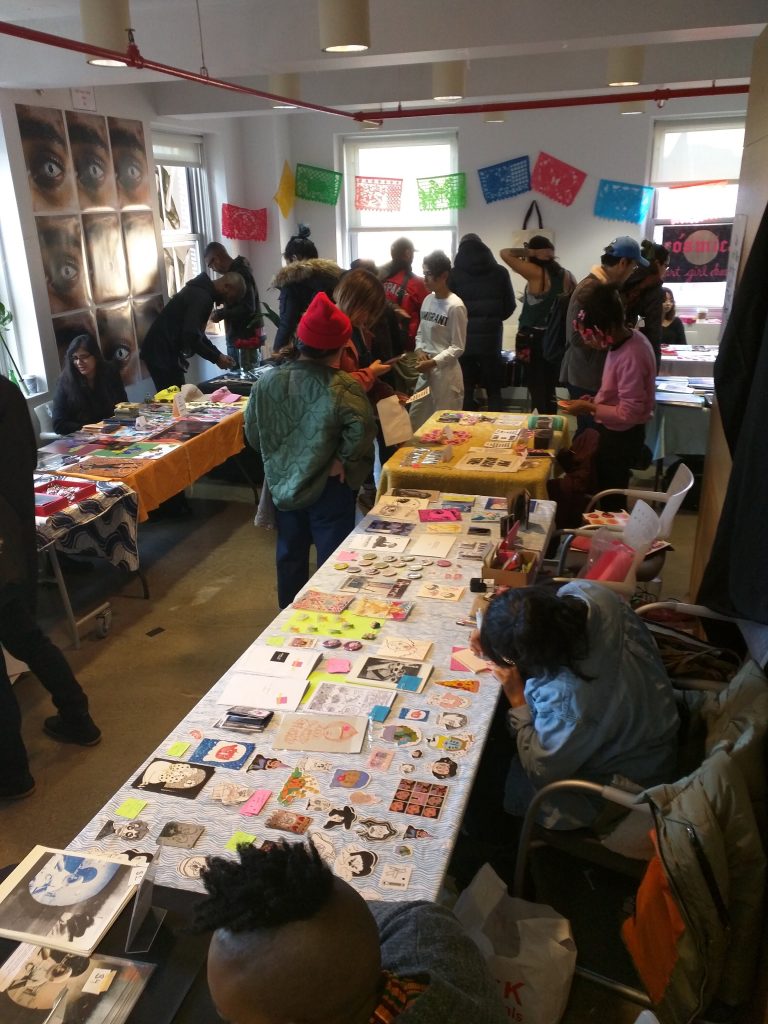 You’ve been to a bunch of zine fairs. What could zine fairs and other DIY art spaces do better to make it more inclusive and accessible spaces?

So with your fair, [Canzine], you do it where it’s open call. That’s not good enough, if every time you’ve done it, you realize there’s not enough representation of black and POC tablers. Because that’s your responsibility. Providing an open call is taking no responsibility for anything, and it directly aligns you with the hierarchy of information —who has it and who doesn’t. So if you realize that it’s only white people, where’s the thinking there? Why is there no responsiblity taken for your party? If people come to your zine fair and they’re not feeling the vibe, that’s your fault. It’s your job as the host to provide the vibe for your zine fair, so if you go in there and its all white folks, and its not your vibe, then you need to harder to work to get that.

You should intentionalize that space, it is not hard work. And a lot of people just don’t understand how, when you don’t prioritize that work, you are latently okay with oppressive structures, because they don’t affect you. Oppression is not a an abstract distant ordeal, it’s actually something that we can change person to person and business to business to make a conscious decision

BP: What are 3 tips you would give to somebody organizing a zine fair?

1. If you ask for advice or help, accept it and listen. Be patient with the people you choose to work with to organize things.

2. Stay organized. It can actually be easy. Working in one folder on google, and then working through one folder in my email, very simply organized. Don’t lose peoples payments. Easy. Every time something happens, you just check off a box that it happened.

3. For me, what I found was really helpful was to be willing to add in as many makers as possible. Any time I got a request. Be very open to let people in. Be very open to find someone when there’s a cancellation. Be very open to make space for people. That’s the idea is to make space. If they want a space, they want a corner to come in that weekend to meditate, give them the corner. Let people come in. Thats why when you come in a fair, you like it — because that space was made. They send you an email? They need to be a part of the fair in some way.

So what’s next for you and the fair?

So for 3 Dot Zine, so we’ve launched a web store which right now just has my zines and vintage clothing. 3 Dot Swap, I want to build it out to be a real swap shop with zines and art and cool things that people wanna buy online. And this month I’m in two more fairs.

I’m planning another Brown Paper Zine Fair in May in Baltimore, it will be a part of Kahlon’s Cut Up series in May. I’m already noticing the difference coming from New York to Baltimore. It’s a different kind of communication, and people ain’t looking for it. You got to really find a way to make that space available and trusted.

Would you like to participate in future iterations of the Brown Paper Zine & Small Press Fair? Send an email to [email protected]