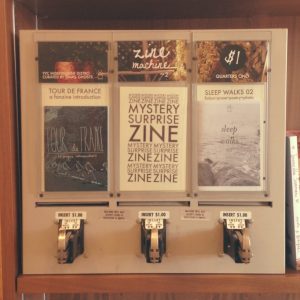 Thanks to Karlene Nicolajsen, Calgarians will soon be shaking out their purses and digging beneath couch cushions to gather up change for a particularly sweet new vending machine offering – zines.

“It’s not an original idea,” she said.  “But there is nothing like that in Calgary or really Alberta.”
Nicolajsen combed through Kijiji ads and lucked out, finding an old map machine and an unwanted candy machine hidden in an office building. She repurposed both as zine vending machines.
“Some pretty weird stuff came up in my search,” she said. “Some machines are being sold as collector’s items, and lots of company schemes showing up online. I’m glad I found some things that are working for us now.”

The Zine Machine project began this summer, with one machine loaded with chapbooks located at a Calgary community hub. The project has since expanded into two machines, with Nicolajsen on the hunt for more machines and more venues to place them in. “I’m having a little bit of trouble with placement, but I think I need to be braver and more convincing,” she said.  “I would like to eventually start up some more in Edmonton, which I would have to get someone else to curate or at least be a keyholder.”

Nicolajsen studied creative writing in Victoria, BC, and says that despite the city’s small population, the independent arts and zine scene was way bigger, and there was more public interest than in Calgary.  She’s hoping the zine machines will change that, step by step. “People in Calgary don’t have a lot of venues for their work. We two zine fairs a year, sometimes three, and it’s all kind of the same people who go,” she said.  “I wanted to create better distribution and exposure for these people. I wanted to expand the community.”

Karlene is the co-creator of Small Ghosts, a small desktop publishing operation she runs with Jeffrey Wood. Karlene sources some content and creates other portions herself. Jeffrey, for the most part, handles the binding, distribution and computer-related tasks. In addition to these pursuits, she’s is beginning to teach herself bookbinding. “I’m interested in publishing and editing,” she said.  “I have a letter press and I’m training myself on it. I’m interested in more manual book binding.”

Nicolajsen says she hopes to inspire other Albertans to participate in DIY culture, and so far has been successful. Although Zine Machine has been around for only a short while, she is already fielding questions from interested writers and artists who had never heard of zines, or had never previously considered self-publishing.

“I’m definitely getting emails from people who say ‘I’ve never published anything before’ and I say ‘Well, start photocopying some stuff, and then you have,’” she said. “They don’t realize that they can do it themselves and people will read it.”