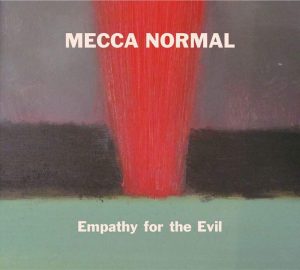 The name Mecca Normal may not be immediately recognizable to some young agitators, but the influence of the Vancouver-based indie-punk band — celebrating their 30th year of existence with their latest album, Empathy for the Evil — runs deep in the blood of modern-day feminists, activists, riot grrls and art punks.

Bandmates Jean Smith and David Lester were writing songs about gender, society,inequality and politics alongside their contemporaries like Beat Happening’s Calvin Johnson and members of Bikini Kill, paving the way for a host of younger bands looking to marry their ideas and art to provoking music.  (Guitarist for the dearly departed Sleater-Kinney (and Portlandia cp-star) Carrie Brownstein has frequently written about the group and their influence.)

Over the years, Smith and Lester have added graphic novels, visual art and fiction to their resumes, but their work as songwriters remains as candid and revolutionary as ever. Lester’s angular guitar lines and Smith’s strong, high voice – switching from folky croon to raging recitative – convey the urgency of their lyrics plainly.

Songs like the rollicking “Art Was the Great Leveler” and the more subdued “Normal” focus on the intricacies of the artist’s life — the things that connect, join folks together and perhaps drive wedges between them. I can think of no one better than Smith and Lester to show us the way. (Alison Lang)

Mecca Normal is on tour now. Buy Empathy for the Evil at the M’Lady’s Records site.

1 thought on “Music Review – Mecca Normal: Empathy for the Evil”