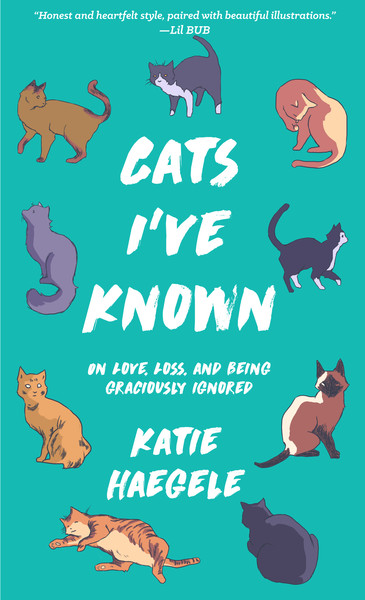 Have you ever known a cat who mattered so much to you, or who was so ubiquitous, you couldn’t imagine a life without them? Katie Haegele has known dozens. In Cats I’ve Known, she offers engaging, humorous and touching chronicles about them, with a rich illustration of the subject accompanying each of the accounts.

The book is accessible and reads as though it were a personal journal. In one chapter, Haegele is candid about her love for her sister’s “first-ever cat in what is now — to my creeping horror — a five-cat household,” an independent “Queen Bee” named Gloria. “I fucking love this cat,” she writes — a declaration that will resonate with many readers who’ve had the pleasure of knowing a similarly free-spirited feline.

Thankfully, Haegele isn’t simply gushing about cats. Instead, she uses the animals as a gateway into observing the people around her, from family (such as her mother and sister) to friends and, perhaps most intriguingly, strangers.

The book’s strongest moment is when it asks a question many readers may have asked themselves: “How do you characterize the relationships people have with animals?” For Haegele’s, they’re similar to the relationships she has with people, but “simpler.”

A book about cats could seem banal and hackneyed, especially since the antics of countless fleet-footed felines are just a quick internet search away. But in Cats I’ve Known, Haegele injects enough of herself — and other characters in her life — to make it well worth the read. (Justin Crann)