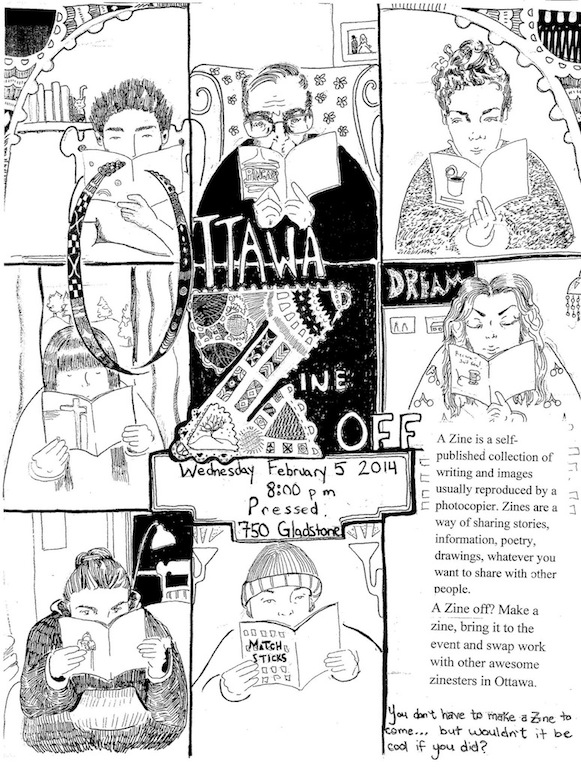 One week from today,  a clutch of experienced and first-time zine-makers will descend upon Pressed Cafe in Ottawa for the fourth annual Ottawa Zine-Off. Participants will make a brand-new zine and bring it to the event to share, trade, and discuss, and it’s also an ideal opportunity to meet all sort of cool friendly folks from the Ottawa area and beyond. You don’t have to make a zine to attend, but you really should give it a shot.
Co-organizers JM Francheteau and Maxx Critical were kind enough to take some time and answer some questions via email ahead of the event and told us a bit about the Zine-Off’s history, how they came to be involved with it, and what they’re looking forward to this year. Thanks to them! The Zine-Off happens Wednesday February 5th at 8pm at Pressed Cafe (750 Gladstone). Check out the Facebook event here.

Broken Pencil: I understand the first Zine-Off took place in a backyard. Can you give me a little more info about when and how the event started happening?

Maxx: At the time, I lived in a punk house. My roommate Neil and I both love zines, and we would talk about writing our own, but would always find excuses not to. In my case, I wrote zines as a teen, but stopped when I was 16 – I’d been thinking of ways to motivate myself to write again. Finally, we decided to organize a Zine-Off, which we saw as an extension of the 24-hour zine events happening in the U.S. By giving everyone a communal deadline, we hoped to motivate our friends to create something in time for the gathering. We mostly reached out to our immediate social circle, gave everyone a month or so to make a zine, and hosted a party in our backyard. Not all who attended made a zine, but it was still a great time.

The 2nd Zine-Off was held at a local café, Pressed, in an attempt to attract a bigger crowd. Neil and I reached out through local media, as well as posters in all our favourite spots. I didn’t know JM before that event – he came to the 2nd zine off, with his own zine, because he’d seen a poster. I thought that was really cool! Neil moved away from Ottawa, so JM stepped up as co-organizer. He was instrumental in making the 3rd Zine-Off an even bigger and better event!

JM, I read in another interview that you created your first zine after attending a Zine-Off. What was it about the experience that inspired you, particularly? Was it a particular zine, or just the overall vibe of the event?

JM: Actually, I created my first zine to bring to the Zine-Off after seeing a sign Maxx and Neil had posted on a telephone poll in the neighbourhood. What really hooked me was the ethos that poster expressed: “You don’t have to make a zine to come out… but wouldn’t it be cool if you did?” It felt very spontaneous and creatively freeing to jump into zines.

My collaborator Abby Kashul and I had a general idea about how zines looked and read, but we were working on instinct on that first one. It ended up being closer to experimental micropress poetry than most zines, but our second one owed a lot to the zines I was exposed to afterward like Truckface, Doris, Alanna Why’s Finale ’95 and Moe Bowstern’s stuff.

Give me a sense of the type of people who come to the event. It seems to draw people from all over Ottawa’s creative community – not just the zine community. Do you see a mix of first-time creators and experienced zinesters?

JM: Maxx and I move in somewhat different circles so I think we each are able to hit different groups of people when we spread word about the event, whether it’s punks, artists, radicals, poets or people who could be one of the above, but maybe don’t know it yet. rob mclennan, for example, is someone who has published my poetry in the past and is a big backer of independent and small press activity in the city, so he’s given me carte blanche to use this great network of websites he maintains. But we’ve also had people with a longstanding commitment to zines like Amber Dearest of Fight Boredom bringing her distro down from Montreal, and we’ll likely have a few more distros at the February event.

Maxx: As JM stated, we both hang out in slightly different social circles, so we draw different crowds. I don’t think Ottawa has an experienced zinester crowd per say – I found out about zines in the early 2000s through Jeff Miller’s Ghostpine and Chris Landry’s Kissoff, but I never had the chance to meet them while they both lived in Ottawa. It seems that since then, there’s been a decline in physical publishing; everyone would rather make a tumblr or blog. I’ve been told that the Zine-Offs have helped people become more aware of zine culture, and at every event, we see returning zinesters and new participants. It was a great pleasure to have Amber come down last time – creative types don’t always see Ottawa as a very artistic city. I know of at least one zinester coming from out of town for this event, and I’ve heard of talks in Montréal of organizing something similar.

For creators, it’s often important to set self-imposed deadlines in order to get things done. It’s also difficult to make the leap and show your work to other artists (not just your friends, family etc, although they’re good too!) It seems the Zine-Off really attempts to address both of these issues, as well as foster a sense of community. Have you heard any feedback of interesting/challenging interactions between people who have attended the Zine-Off in the past?

JM: I’m not sure whether she made the zine particularly for our event or not, but Stephanie Lorraine Meunier brought a great zine about anxiety and self-care to the Zine-Off, her first I believe, and later in the year she ended up reading at the Ottawa stop of the Toronto Queer Zine Fair tour with some more well-established zinesters like Eddie O, Maranda Elizabeth and Eric Levitt which was very cool. More directly I remember distinctly Maxx looking at some of the weirder pieces people brought in (a zine shaped like the letter ‘G’, a microzine in a matchbox) and telling me, “We need to step up our game.”

Maxx: Yea, Stephanie wrote her zine for the 3rd Zine-Off and was then a local reader for the winter survival tour, organized by the Toronto Queer Zine Fair collective. Lily Pepper, who does the amazing zine rack (a shelf where she places all kinds of awesome zines for sale) at Pressed, made her first zine for the 3rd Zine-Off as well. Although she’s a big supporter of zine culture, she’d never written one before! It was really exciting for me to see she felt comfortable and motivated enough to create something for our event.

Have there been any zines of particular note created for the Zine-Off that you would like to highlight? (not to exclude anyone, but more to provide highlights and examples)

JM: A local writer named Craig Calhoun did a kind of satirical crypto-fascist zine called Where They Will Sit: Prophecies in Modern Office Furniture Design about his day job designing cubicles; it’s amazing. I loved Rachel Gray’s travelogue zine Greyhound (and I’m not saying that only because she designed a beautiful poster for the upcoming event). Long-time zinester Alanna Why has done some great stuff for past events, and I understand she’s debuting issue 3 of Finale ’95 at the February Zine-Off, which I’m fucking stoked about.

Maxx: I was really excited about Amber Dearest’s zine, The Triumph of our Tired Eyes, which was hot off the press for the 3rd zine off. I also always enjoy Alanna’s zines. I love pretty much all zines, so I’m really excited to see what will have been created for the 4th Zine-Off.

Why is an event like this important for Ottawa in particular?

JM: There are a million people in this city, yet sometimes we come off as some kind of cultural backwater. I don’t really give a shit if people in Toronto feel that way about Ottawa, but I hate when people who actually live here accept that perception as truth and don’t make the effort of connecting with the community of creative people. I think organizations and events like Ottawa Explosion, Arboretum Fest, Herd magazine, Apt. 613 and above/ground press are starting to change people’s minds about what kind of city Ottawa is, and I want these Zine-Offs to be part of that. They’re little detonations of humour, politics, personal exploration and, uh, cat comics, and they get people out of the fucking house.

Maxx: As JM said, for some reason Ottawa is seen as a place not as culturally interesting as say, Montréal or Toronto. I think that’s really sad – a lot of creative types have moved away from the city because it can be hard to work on your art in a government town with such a high cost of living… At the same time, I think it’s important to create initiatives within your own community and not simply give up and move away. I’m really proud to hear that the Zine-Off has inspired others in other cities to try and organize their own events, and I hope to see a zine revival throughout North America.

Maxx Critical is the co-organizer of the Ottawa Zine-Off, as well as the author of the zine The Reverse Cougar Years. She works as a sound engineer in the Ottawa region. When she’s not pushing faders, she also volunteers with Ottawa Rock Camp for Girls.

JM Francheteau is a rural transplant living in Ottawa, ON. He co-organizes the Ottawa Zine-Off and writes the zine Night Shift. He also serves on the board of Arc Poetry Magazine, and has published poems and criticism in a few journals.